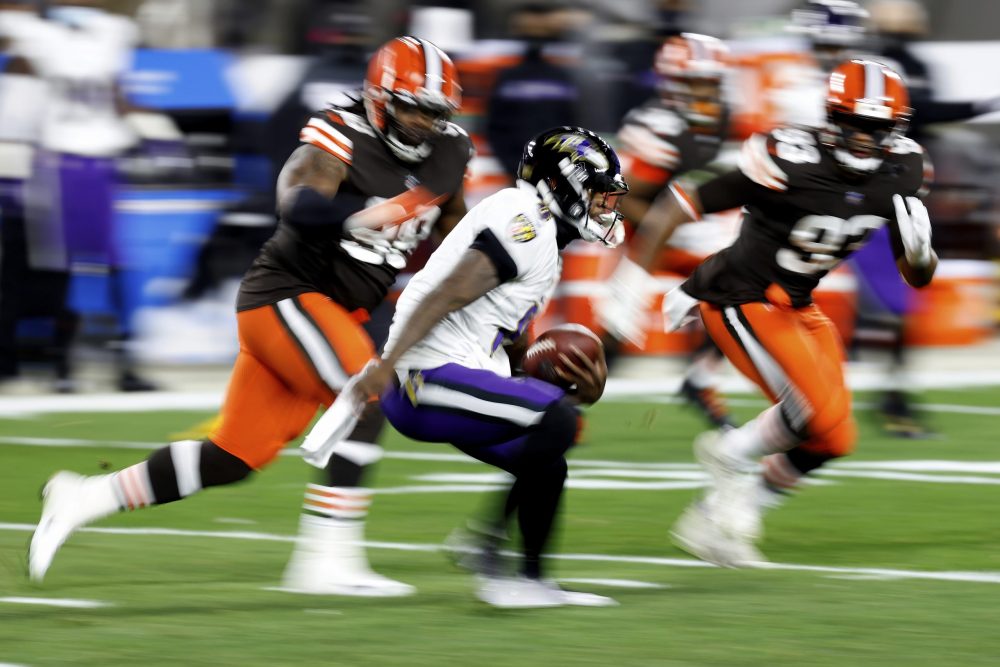 This has become a weekly staple as the performance of the rush defense has slipped — and the Browns can’t win if the Ravens run all over them. Cleveland’s chances are improved because of issues along Baltimore’s offensive line, but the Ravens still rank third in the league with 151 rushing yards a game and fifth with 4.8 yards a rush. The Browns run defense has fallen out of the top five, ranking seventh at 101.4 yards a game and 10th at 4.1 a rush. It’s been exposed in three out of the last four games, giving up 115 yards to the Steelers, 184 to the Patriots and 168 last week to the Lions.

The Ravens have been successful despite season-ending injuries to running backs J.K. Dobbins and Gus Edwards before the opener. Veterans Devonta Freeman and Latavius Murray have taken over, but quarterback Lamar Jackson is the reason the run game excels.

“That’s the difference, him being able to pull it every play, or hand it off every play,” middle linebacker Anthony Walker Jr. said. “It’s kind of like playing 11-on-11 football instead of 11-on-10. We’ve got to play fundamentally sound with our rules more than anything this week.”

Myles Garrett, Browns defense in search of right formula to take down, slow down Lamar Jackson

Jackson leads the Ravens with 106 rushes for 639 yards and a league-best 6.0 per carry and has two TDs. He has 10 100-yard rushing games in his four-year career, tied with Michael Vick for the most by a quarterback in NFL history. Defensive end Myles Garrett called him “dynamic by himself” and capable of running for 200 yards.

“It’s a bigger emphasis on swarming to the ball, all 11 guys got to be in the frame when the film stops and that’s what we’re going to work on at practice,” safety John Johnson III said.

The Browns have been vulnerable on inside runs, misdirection and end-arounds, and the Ravens will stress every aspect with a run-heavy scheme that features extra tight ends and a fullback.

MAN OVER THE MIDDLE

Tight end Mark Andrews is more than a security blanket for Jackson. He’s a game-changer.

Andrews, who played with Baker Mayfield at the University of Oklahoma, has 56 catches for 696 yards, trailing only Chiefs All-Pro Travis Kelce among NFL tight ends. Andrews has four touchdowns this year and since 2019 is tied with Kelce for the tight end lead with 21 touchdowns and third with 178 catches and 2,249 yards.

“He can do it all,” defensive coordinator Joe Woods said. “Really just his ability to catch the ball. He is big. He can run. He is athletic. You can see it all over the field. When in doubt, he is going to get the ball. He is tough to defend, but I feel like we have guys who can match up against him just because of the size.”

Andrews has done plenty of damage against the Browns in his three-plus years. In six games, he has 25 catches for 330 yards, a 13.2 average and five touchdowns. The Browns are still struggling to cover tight ends this season, with Kelce catching six passes for 76 yards and two TDs, Pittsburgh’s Pat Freiermuth four for 44 and a TD, New England’s Hunter Henry four for 37 and two TDs and Detroit’s T.J. Hockenson six for 51.

“With the size that some of the tight ends around the league have, it is the classic, ‘They are always open,’” coach Kevin Stefanski said. “They can go vertically and body defensive backs and get their hands away from their body and catch the ball.”

Andrews has good size at 6-foot-5, 256 pounds, strong hands and a knack for getting open. The Browns have a variety of options to try to reduce his production — linebackers Jeremiah Owusu-Koramoah and Malcolm Smith, safeties Ronnie Harrison Jr. and Grant Delpit and even cornerback Greedy Williams — but none is a sure thing.

BEST AT THE BIGGEST TIMES

The Ravens defense is flawed. It ranks 31st in the NFL with 281.1 passing yards allowed per game, gives up explosive plays and misses too many tackles.

The imperfections seem a lot less important considering the Ravens lead the league on third down (30.5 percent conversions) and in the red zone (42.9 percent touchdowns).

“That’s what we’re focused on and they obviously do a really, really good job of that,” Mayfield said.

“They play very aggressive on third down,” Stefanski said of the Ravens. “They can blitz zero you. They can drop everybody into coverage. They play man. They crawl up in your face playing very aggressive style. They have multiple rushers from a personnel standpoint that they can bring. They have varied type of rushers. You have a bunch of really good guys who they can throw at you in the pass rush game.”

The pass rush statistics tell a similar story. The Ravens are 20th with 22 sacks but second with 49 quarterback knockdowns and fourth with pressures on 28 percent of the dropbacks. The stats that matter most are the ones in which the Ravens excel.

“Scheme is a big part of it,” offensive coordinator Alex Van Pelt said. “They do a great job. Their pressure packages are probably one of the top in the league as far as how they pressure.

“Third down, they give you some real exotic looks, but in the red zone, they just play good, sound defense down there. They are No. 1 in the league in both areas.”

The record of Ravens coach John Harbaugh against the Browns.

Fourth-quarter points scored by the Browns in the last six games.

Days since running backs Nick Chubb and Kareem Hunt played in a game together, Oct. 10 vs. the Chargers.

I have a sneaky suspicion Baker Mayfield and the Browns will play much better than in the last couple of weeks. I’m just not convinced it will be enough to overcome Lamar Jackson and the Ravens in prime time on the road. Ravens 27, Browns 26.

Commentary: A rough season for Baker Mayfield can still be salvaged
Commentary: Bye week is here, but it might be bye-bye season already