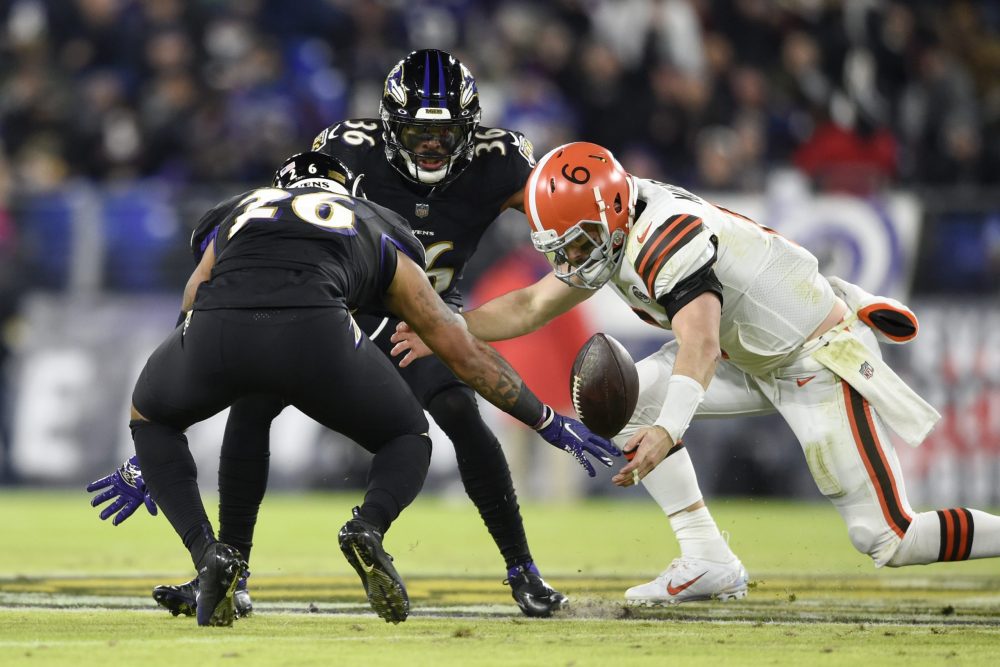 BALTIMORE — The Browns had trouble counting to 11, couldn’t figure out their defensive substitutions and burned two timeouts because they didn’t have the correct number of players on the field.


The offense scored only three points off four Jackson interceptions.

The Browns didn’t look like they’re ready to win the AFC North for the first time in a 16-10 loss to the Ravens on Sunday night at M&T Bank Stadium.

The Browns dropped to 6-6 and trail the first-place Ravens (8-3) by 2½ games. They would’ve moved into a wild card spot with a win but remain on the outside in a crowded race.

The Browns have a bye this week and start the all-important final five-game stretch by hosting the Ravens on Dec. 12. They’ll likely need to win at least four.

“Just keep fighting,” said defensive end Myles Garrett, who got his 14th sack to tie Reggie Camp’s franchise season record set in 1984. “You never know what’s going to happen. Got enough games left where if we keep on trying to win out and it so happens a couple teams lose, we can find ourselves in the playoffs, find ourselves in good position.

“It’s a little more out of our hands than we’d like, but we’ve got to take it one game at a time, recover in this bye week, self-evaluate, see how we can get better and keep the train moving.”

Mayfield went 18-for-37 for 247 yards, a touchdown, no interceptions, a fumble and a 79.4 passer rating. He had several throwaways after avoiding sacks and not finding anyone open.

The game fell almost solely on Mayfield’s shoulders because the Ravens’ second-ranked run defense held Nick Chubb to 16 yards on eight carries with a long of 5. Kareem Hunt, in his return after missing five games with a calf strain, rushed seven times for 20 yards with a long of 9. He didn’t have a catch and was targeted once.

Landry was the biggest threat, catching six passes for 111 yards.

The Browns have scored 17 or fewer points in six of the last seven games.

“It is very frustrating,” coach Kevin Stefanski said. “To not score enough, it’s always a combination of things — staying on the field on third down, trying to run the ball effectively and getting in the red zone, all of those things. But we’re just not doing a good enough job, and that starts with me.

“We had some opportunities and made some big plays, but we have to get guys open. And we’ve got to find a way to stay on the field on third down.”

The Browns, who went 4-for-13 on third down, had three chances to take a lead in the fourth quarter after stops by the defense. Again Mayfield and the offense couldn’t convert them into a lead or win. The same was true in losses to the Chiefs, Chargers and Steelers, although the Browns entered the fourth quarter with leads in those games.

After Mayfield threw wide of Landry on third-and-5 with 6:34 left, the Browns punted and the Ravens took over at their 24-yard line. With Jackson running and throwing, they moved into the range of Justin Tucker, who made a 49-yard field goal with 1:10 left.

“It’s one of the best times we’ve played Lamar,” said Garrett, who added five tackles, a tackle for loss, two quarterback hits and a pass defensed. “Four picks, constant pressure, had him looking over his shoulder, that’s a decent job.”

Jackson became the first NFL quarterback since 2013 to win after throwing four interceptions, snapping a 41-game streak, according to ESPN Stats & Info.

The Browns’ final chance started at their 25-yard line with 70 seconds left. After three incompletions, including a pass over the middle that hit tight end Austin Hooper in the hands in tight coverage, the Ravens blitzed on fourth down. Mayfield got rid of it to Njoku, but he couldn’t break a tackle and was stopped 3 yards short of a first down.

The Browns pride themselves on finding smart, tough and accountable players. They didn’t play smart Sunday night, especially in the first half, and it cost them dearly in a game they had to have to change the outlook on the rest of the season.

McDowell hit Jackson out of bounds, and Clowney launched into him and led with his helmet.

On Landry’s fumble, he took the shotgun snap, held the ball forever, wound up to throw and was hit. The second-quarter play started at Baltimore’s 34-yard line.

Mayfield’s fumble came two possessions later. The play began at the Baltimore 28, he kept backpedaling and the ball slipped out of his hand as he tried to throw a screen pass. The Ravens recovered at their 49-yard line.

Jackson kept the Browns in the game with four interceptions, including on three straight drives in the second quarter. Cornerback Denzel Ward and safeties Grant Delpit, Ronnie Harrison Jr. and John Johnson III got the picks.

“It’s very frustrating. When you have that kind of performance, I’m not saying you expect to win, but you expect to have a chance,” Garrett said. “That’s all we were given. We were given a chance and we didn’t get it done.”

#Browns Myles Garrett on not being able to win after getting 4 INTs of Lamar Jackson. pic.twitter.com/KzmBXZA0jY

Jackson made just enough Jackson-type plays to overcome the turnovers. On the first touchdown drive of the game, to start the third quarter, he threw 39 yards to tight end Mark Andrews after rolling right, then found Andrews alone in the middle of the end zone for a 13-yard touchdown after avoiding the sack attempts of ends Myles Garrett, Takk McKinley and Clowney. Jackson had retreated to near the 40-yard line when he spotted Andrews. He hit Garrett’s hand with his follow-through but still got the ball to his favorite target.

“Man made a helluva play, that’s what he does,” Garrett said. “I hit his arm while he was throwing, I was expecting it to be a fumble or an incomplete pass and he gets it 30 yards down the field, into the end zone. Guy’s a great player.

“I dapped him up because I have sportsmanship, at least in my eyes. I help guys up. I dap them up when they make a helluva play like that one that he made.

“The guy’s a baller. It’s a game. He’s one of the best at it. I appreciate greatness.”

The first half was full of Browns miscues, but they trailed the Ravens only 6-3.

The first points came on a 52-yard field goal by Tucker. The kick capped an ugly series for the Browns defense.

The Ravens faced fourth-and-2 at their 33-yard line with 3:11 left in the first quarter. They successfully faked it with a snap to the upback and run up the middle, but the officials ruled no play because they hadn’t signaled ready for play.

The Ravens sent out the offense to go for it, and the Browns called timeout to avoid a penalty for 12 men on field. The Ravens lined up to go again, made a late substitution, the Browns sent two players on the field and only one ran off and were penalized 5 yards for 12 men, giving the Ravens a first down.

The Browns’ only points off the Jackson interceptions came on a 46-yard field goal by McLaughlin that deflected in off the left upright. He’s missed three field goals in the last four games and had an extra point blocked on a low kick.