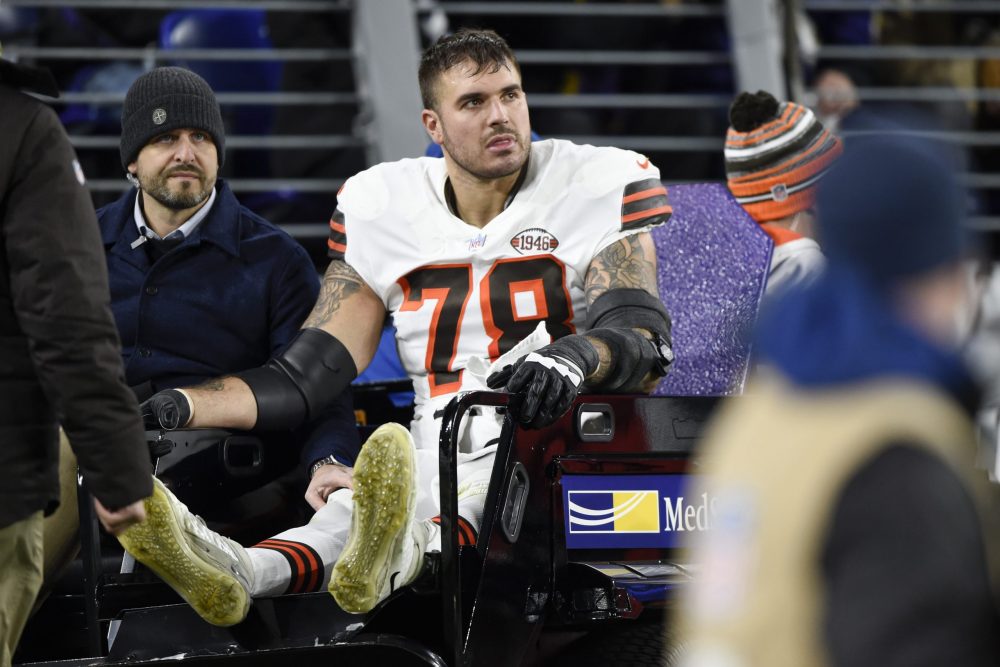 BALTIMORE — All-Pro right tackle Jack Conklin’s awful season of injuries got much worse Sunday night in the 16-10 loss to the Ravens.

He exited in the first quarter with a right knee injury, and ESPN reported the concern is he suffered a torn patellar tendon, citing a source.

“I don’t know at this point,” Stefanski said when asked about the report. “It was serious, but let’s get the MRI to confirm that.”

The MRI was scheduled for Monday.


Commentary: Bye week is here, but it might be bye-bye season already

Conklin’s knee appeared to give out as he pass blocked. After staying down for a while, he tried to limp off the field, but the knee buckled and he needed help to get to the sideline. He was examined in the medical tent and driven by cart to the locker room.

Conklin missed two games earlier in the season with a knee injury, then his left elbow was dislocated against the Steelers in his return Oct. 31. He was activated from injured reserve Saturday and was hurt on the Browns’ second drive Sunday.

“You hate that for anybody, especially Jack, who’s been fighting to come back after the dislocated elbow,” quarterback Baker Mayfield said. “Just one of those freak deals. Hate it for him. He’s one of our guys, and it’s just a really, really unfortunately thing.”

Conklin signed a three-year, $42 million deal in 2020 to join the Browns. He was an All-Pro last season as the Browns made the playoffs for the first time since 2002.

He was replaced by Blake Hance, who started in his spot while he was on IR.

“That hurts to see Jack like that,” defensive end Myles Garrett said. “I see the guy work every day, saw him work in training camp.

“I was part of the group that got him to come here. To see him have to deal with all these injuries, knowing what he’s going through and it’s tough to see, tough to watch and I feel for him.”