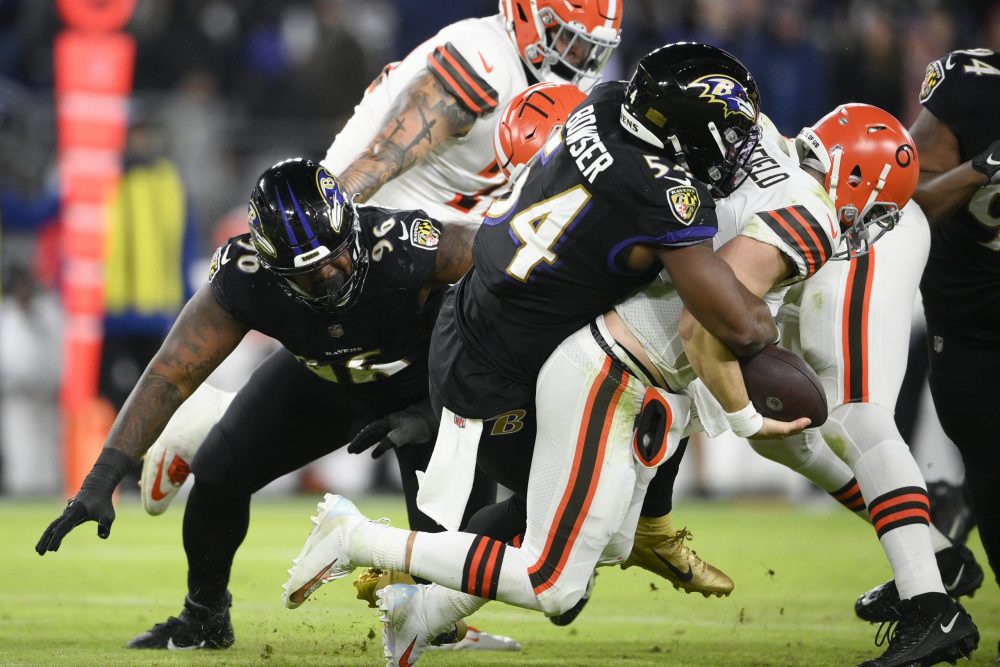 Another formidable opponent. Another Browns loss.

And the band plays on.

The Browns intercepted four passes Sunday night — and they still lost. Not just any loss, but a loss in a game they could have won, but didn’t.

There have been far too many of those types of games for the Browns this year, and the later in the season they occur, the more damaging they become. This one may have been a season-killer.

The Browns’ metronomic march to mediocrity continued Sunday night with a 16-10 loss to the Baltimore Ravens.

Previously this year the Browns had records of 3-3, then 4-4, then 5-5. Well, guess what? They’re now 6-6. That’s no way to punch your ticket to the playoffs. With five games remaining the Browns pretty much have to win out to reach the big dance for the second consecutive season.

A bye week this week may give them some time to heal and concoct a way to piece together a miracle finish. That ship hasn’t sailed yet, but all the luggage is on board.

It’s tough to halt 12 weeks of mediocrity with a 5-0 sprint to the finish line.

Especially when the Browns, following their bye week, have to again play a team, the Ravens, that likely pulled the plug on the Browns’ season Sunday night in Baltimore.

The Browns defense played well enough to win, but the Browns offense played poor enough to lose, and lose they did. Sixty minutes of trying netted them one touchdown, and one ricochet field goal. It’s the sixth time in their last seven games that the Browns’ vaunted offense has scored 17 or fewer points.

And their offense was supposed to be strength of the team.

Bruised and battered Baker Mayfield, who should be accompanied by a fife and drum corps every time he takes the field, tried to rally his body for one more heroic performance. But a battered Mayfield remains a shell of his former self, and the Ravens defense knew it.

They stacked the line of scrimmage to stop the Browns running game, secure in the knowledge that the Browns’ creaky quarterback was incapable of hurting them.

Mayfield completed 18 of 37 passes for 247 yards, and his 79.5 passer rating was 30 points higher than that of the Ravens’ untackle-able Lamar Jackson. But Mayfield only got the Browns into the end zone once.

The Browns defense played gallantly, but had a couple killer breakdowns at the worst possible moments. And with Cleveland’s offense leaking oil, a comeback never really seemed possible.

The first half was so ugly the NFL should have issued refunds to all those in attendance. The teams combined to run 72 plays and none of them resulted in a touchdown.

The Browns’ only points came on a ricochet field goal.

The Browns intercepted Jackson three times in the first half but never came close to scoring a touchdown. Cleveland’s vaunted running game averaged 2.1 yards per carry on 10 carries.

The Browns’ two quarterbacks, Mayfield and Jarvis Landry (don’t ask), each fumbled once.

Inexplicably channeling his inner Freddie Kitchens yet again, Kevin Stefanski tried that gimmicky play with Landry taking the snap from center. Except this time, Landry fumbled.

Browns kicker Chase McLaughlin attempted two 46-yard field goals in the first half. He missed one and got lucky on the second, which he bounced off the upright, and the ball, perhaps with a nudge from the late great Lou Groza, inexplicably tumbled through for three points.

The signature moment of the game by the Browns came at the end of the Ravens’ nine-play, 75-yard touchdown drive to open the second half.

Jackson ran around in the backfield for five or 10 minutes, waiting for a receiver to come open. Finally, Mark Andrews did — in the end zone. Jackson fired a 38-yard pass to his big tight end, who, despite his considerable size, no Browns defender noticed. Unencumbered by any resistance from the opposition, Andrews caught the pass that gave Baltimore a 13-3 lead.

The way the Browns offense was playing, it felt like 33-3.

After the play, Browns defensive Jadeveon Clowney took off his helmet and fired it into the turf in frustration. Myles Garrett shook Jackson’s hand.

Browns-Ravens Preview: 3 things to watch, 3 key numbers, the prediction
Analysis: The rest of the season should belong to Baker Mayfield, who has plenty to prove