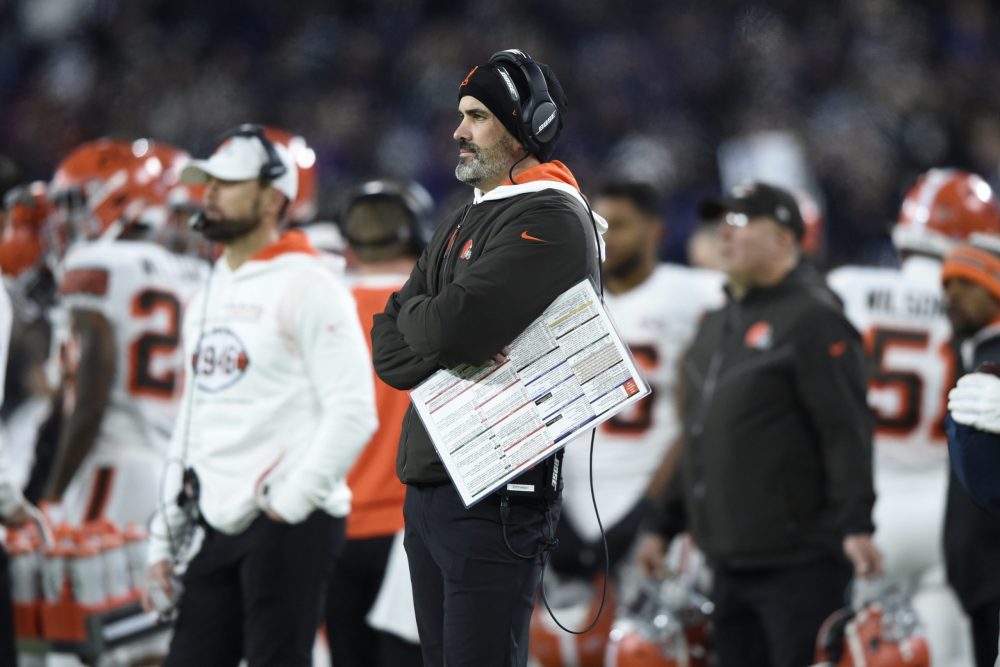 BALTIMORE — The stagnant, faltering, infuriating offense needs to be fixed.

“We’re not doing that,” he said Sunday night after the 16-10 loss to the Ravens.

“Baker is our starting quarterback,” he said. “He is healthy and getting healthier.

“We just need to be better as an offense. I think Baker needs to play better, I have to coach better, we have to block better and we have to run routes better. All of the above is true.”

“I am comfortable with the communication that goes on throughout the week and on gameday,” Stefanski said. “I am comfortable with how we are doing it right now. We just have to be better. I have to be better. That is the truth. We just have to find ways to stay on the field and get sevens when we are down there in the red zone.”

The reasons for the questions are simple: The offense isn’t performing up to standards, and the quarterback and play caller are two critical components. The Browns scored 17 points or fewer for the sixth time in seven games as they dropped to 6-6, 2½ games behind the first-place Ravens (8-3) in the AFC North heading into their bye week.

“We just need to make more plays,” Mayfield said. “As simple as that sounds, there’s plays there to be made.

“We needed to have a little bit more confidence and we go back, regroup and just trust that we have the guys to make those plays.”

The Browns have slipped to 20th in the NFL in scoring (21.2 points per game) and 17th in yardage (354.1). Mayfield has struggled while dealing with a variety of injuries — 50.6 completion percentage, 496 yards, three touchdowns, three interceptions, five sacks, 65.1 passer rating in the last three games — but moved better Sunday and believes he’s turning a corner.

“We have not wavered on Baker Mayfield,” he said. “We’re confident in him. I know it’s a quarterback-driven league, but not everything’s on that guy. It’s tough when he’s running for his life on a play or other people aren’t open on a play.”

The defense provided chance after chance Sunday night with four interceptions of Lamar Jackson, including on three straight possessions in the second quarter, but the offense turned the takeaways into only three points.

Jackson became the first NFL quarterback to win when throwing four interceptions since 2013, snapping a streak of 41 games, according to ESPN Stats & Info. The Ravens are the only team in the Super Bowl era to win when scoring fewer than 17 points, totaling fewer than 325 yards (303) and throwing at least four more interceptions than the opponent, according to Stats Perform. Teams had been 0-275-1 in the regular season and playoffs.

“It’s frustrating. It is very frustrating,” Stefanski said. “To not score enough, it’s always a combination of things — it’s staying on the field on third down, it’s trying to run the ball effectively and getting in the red zone, all of those things. But we’re just not doing a good enough job, and that starts with me.”

Mayfield lamented the lack of complementary play throughout the year. When the defense plays well, the offense doesn’t, and vice versa.

“To me, that’s kind of the story of our season so far. Besides the Cincinnati game,” Mayfield said, referring to a 41-16 win. “Gotta play complementary football down the stretch to be a playoff team.”

Mayfield completed 18 for 37 passes (48.6 percent) for 247 yards, a touchdown, a fumble and a 79.4 passer rating. After two straight games barely above 50 percent completions, he dipped below but was hurt by a few drops and being forced to throw the ball away when flushed from the pocket and nobody was open.

“We had some opportunities and made some big plays, but we have to get guys open and we’ve got to find a way to stay on the field on third down,” Stefanski said.

The Browns went 4-for-13 (30.8 percent) on third down against the Ravens, who entered with the league’s best defense on third down (30.5 percent). Stefanski said multiple times he needs to find a way to get guys open, and that’s not new. Especially since the departure of No. 1 receiver Odell Beckham Jr. early this month, the receivers have had a difficult time separating from man coverage.

Stefanski was asked if getting guys open is the biggest issue in the passing game.

“I’m sure it’s more complicated than that,” he said. “We’ll study it. That’s what our job as coaches, that’s what we have to do.”

He can usually turn to the run game to stabilize things and take pressure off the pass game. Not Sunday.

The Browns entered leading the league with 156.8 rushing yards a game but rushed 17 times for 40 yards, a 2.4 average. Nick Chubb carried eight times for 16 yards with a long of 5, and Kareem Hunt seven times for 20 and a long of 9.

The Ravens stacked the box, won at the point of attack and put all the pressure on Mayfield and the passing game.

“They played how they play,” Stefanski said. “We just didn’t run it efficiently enough. We expect to do better than that.”

The passing game was supposed to be much improved this year. Mayfield had a strong second half of last season, Stefanski was NFL Coach of the Year in his rookie season and every key piece of the offense returned.

Instead, nothing’s been easy and Stefanski continues to search for answers. He’s just not going to make a change at quarterback or play caller.