Analysis: The rest of the season should belong to Baker Mayfield, who has plenty to prove 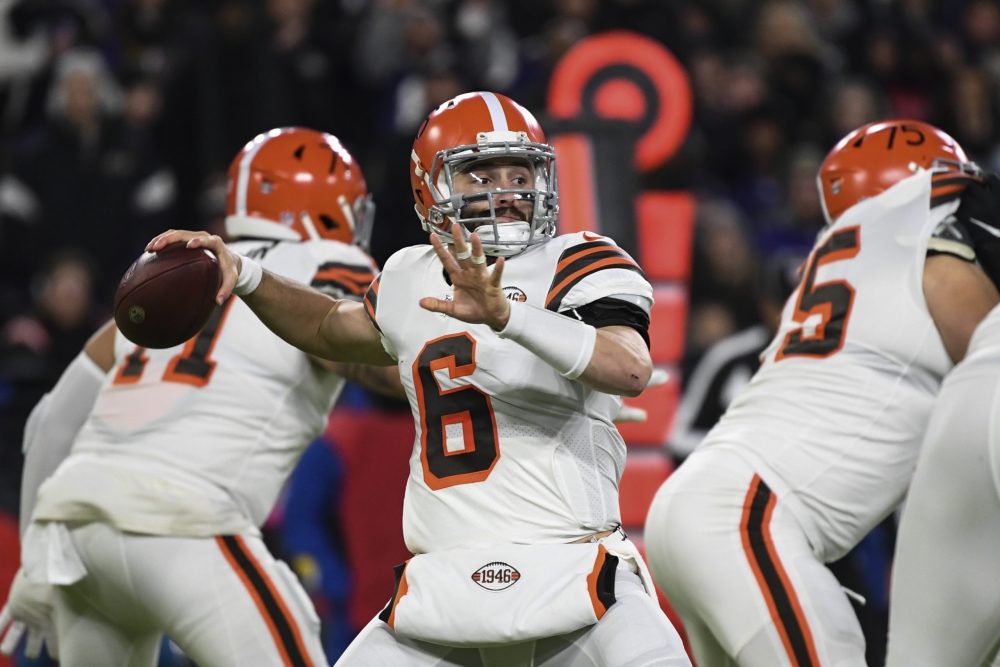 The time has passed for debating whether quarterback Baker Mayfield should still be starting.

Of course, he should.

(His future beyond this season is an entirely different discussion. And one there will be plenty of time to have.)

Mayfield and the coaches have said multiple times he’s feeling better after a recent string of lower-body injuries to go with the torn labrum and fracture in his left, non-throwing shoulder. He’s been more elusive inside the pocket and able to scramble the last couple of games.

This version of Mayfield gives the Browns (6-6) the best chance to win. He’s simply better than backup Case Keenum. The season isn’t over, and Mayfield should have the opportunity to save it and perhaps his long-term future.

“Baker is our starting quarterback,” coach Kevin Stefanski reiterated Monday. “He is healthy and getting healthier.

“We just need to be better as an offense. I think Baker needs to play better, I have to coach better, we have to block better and we have to run routes better. All of the above is true. We just have to be better both individually and collectively.”

I never would’ve taken Mayfield out of the starting lineup once he was cleared to play following the fracture and missed Thursday night game against the Broncos. I believe in playing the starting quarterback — especially one drafted No. 1 — if he’s healthy enough to take the field. And I believe he was.

I understand those who saw the limps to the sideline and the drop in performance starting Nov. 14 in New England and would’ve rested him. That would’ve saved everyone from watching his inaccuracy vs. the Lions, but the Browns’ record wouldn’t have changed. Keenum wouldn’t have won in New England — the Browns lost 45-7 to the red-hot Patriots — and the Browns managed to hang on to beat the Lions.

Injuries have surely been a factor in Mayfield’s performance. But Aaron Rodgers, Matthew Stafford and Teddy Bridgewater are among the many quarterbacks across the league playing through health issues. That’s how the job works.

Mayfield played better Sunday night in the 16-10 loss to the Ravens than he had against the Patriots and Lions — and how quickly everyone forgets he had a season-high 132.6 passer rating Nov. 7 in the 41-16 win over the Bengals — but still wasn’t sharp enough.

He went 18-for-37 for 247 yards, a touchdown, a fumble and a 79.4 rating in Baltimore. The fumble was a game-changer and the latest example of how the season’s going for Mayfield and the Browns.

They had cut the deficit to 6-3 and quickly got the ball back at Baltimore’s 28-yard line with 56 seconds left in the first half after Lamar Jackson’s second interception, this one by safety Grant Delpit, the first of his career. The chance was there to take the lead into halftime, and Stefanski’s second-down screen call was timed perfectly.

The Ravens brought pressure, and running back Kareem Hunt leaked out behind it with blockers and space in front of him. He got caught up for a split-second, which seemed to force Mayfield to double-pump, and the ball slipped out of his hand.

The turnover was on Mayfield, but he didn’t get a lot of help throughout the night. The league’s best run game didn’t show up (17 carries for 40 yards). The pass protection was shaky at times. The receivers and tight ends dropped too many passes.

Mayfield couldn’t overcome these issues, which may wind up being the determining factor in the trajectory of his career.

Does he do enough to elevate the performance of those around him? Does he put the ball in the perfect spot to make life easier for his receivers? Does he make the right read almost every time? Can he make the clutch throw in the big moment?

After Baltimore he’s 0-for-4 this year with a chance to win in the fourth quarter, but it’s unfair to stick the 0-fer all on him.

Jarvis Landry had a fumble and drops vs. the Steelers. And against the Ravens, on the last drive alone, left tackle Jedrick Wills Jr. got beat to force a first-down incompletion, tight end Austin Hooper dropped a third-down pass and tight end David Njoku couldn’t break a tackle on fourth down.

This doesn’t remove the responsibility from Mayfield. He needs to do more.

He’s got five critically important games to prove he can.

Commentary: Bye week is here, but it might be bye-bye season already
Commentary: Browns GM Andrew Berry and his team have been underachievers