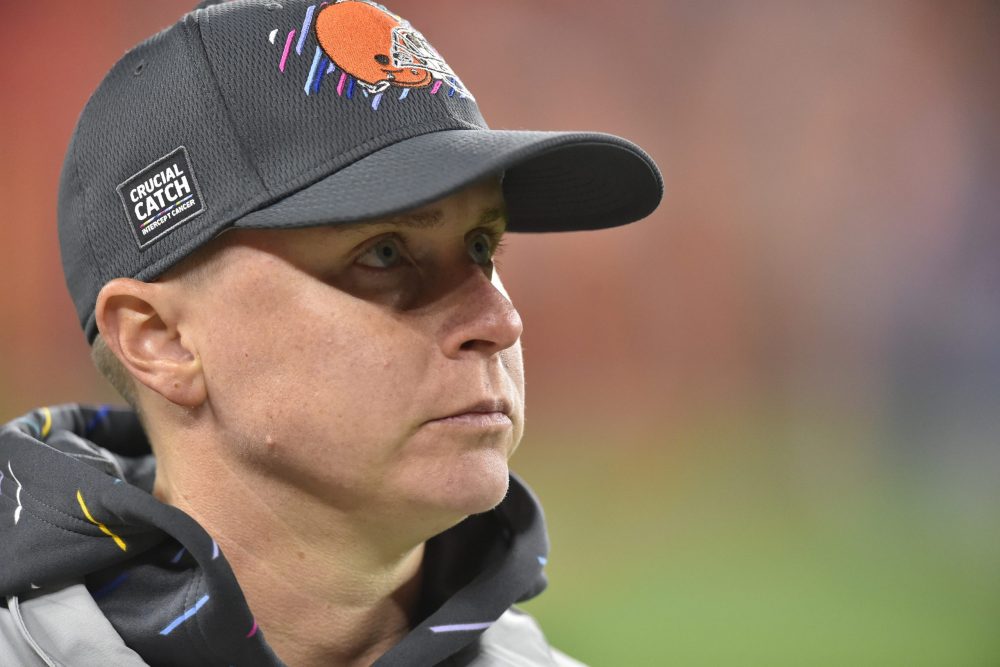 Callie Brownson has twice experienced the exhilaration of winning football world championships as a player on the national team.

“There is also no better feeling in the world than playing your tail off and then somebody putting a gold medal around your neck,” the Browns chief of staff said Thursday. “It is just very special to be able to represent your country in something that you love so much and to be able to share that with 44 other women who love it just as much as you do.”

Brownson will get the chance to win a third gold medal as head coach.

The U.S. team will compete at the International Federation of American Football world championship in Vantaa, Finland, from July 27-Aug. 8.

Brownson envisioned this moment after winning her second gold in 2017.

“I got in the car with (her dad) when we were driving back from the airport, and I told him, ‘I do not know how, but I am nearing the end of my career, and the next time that I am with Team USA, I want to coach,’” said Brownson, who kept notebooks from her playing days. “I did not know in what capacity that was going to be, but I knew that I wanted to make that a reality at some point in the future. It means a lot to me because now I get to take all of those things and the great experience that I had — a life-changing experience at that — and help 45 other women experience that and have that enrich their lives in the way it enriched my life.

“That is probably one of my favorite parts as I think through how I am building this thing. I want to make sure this is something that they talk about for the rest of their lives and something that means so much to them and they can take pride in.”

The team will have 45 players and seven assistant coaches — hiring women is a priority, Brownson said — as the U.S. will compete among the world’s top eight teams. This will be the fourth women’s tackle world championship, and the Americans won gold in the first three.

Brownson played receiver and safety on the championship teams in 2013 and ’17.

“You can’t say enough about the pride of playing a sport that you love internationally while representing a country and wearing the red, white and blue,” she said. “It is a chills experience, to say the least.”

Brownson will miss the start of training camp but has the support of coach Kevin Stefanski and the organization. As chief of staff, Brownson is Stefanski’s right-hand person and also helps coach running backs and receivers.

“USA Football has made a tremendous selection in Callie,” Stefanski said in the news release. “In addition to the honor that comes with representing the United States, this is an exciting professional development opportunity, which I encourage for everyone on our coaching staff.”

Brownson joined the Browns after Stefanski was hired in 2020. She previously spent time coaching at Dartmouth and with the Buffalo Bills.

“He is obviously the No. 1 resource for me,” she said. “He is a mentor for me. It was great to be able to talk to him and let him know that he is one of the big reasons why I am ready for this kind of position.

“He was excited for me. He is definitely excited to see us go chase gold.”

She’s grateful to the Browns for allowing her to miss time and said the organization will get by without her.

“This is a really positive reason to tap into those contingency plans,” she said. “We are all really confident. We have such great people in this building who are excited for me, and we are going to put a good plan in place so that the time that I am out everything runs smoothly.”

Brownson was one of 22 people on the USA Football’s development model council that helped come up with a “reimagined” way to play the sport.

“A world-class team needs a world-class coach, and that’s what we have in Callie Brownson,” USA Football CEO Scott Hallenbeck said. “Callie is a longtime USA Football family member whose coaching acumen, knowledge and familiarity with the international game makes her an ideal fit to lead our team in Finland next summer.”

The U.S. is the only team to win a gold medal, but Brownson said the world is catching up and her team must come ready to play.

“That is something that I am going to challenge these women to is that the world is coming for the U.S. team,” she said.

Brownson is one of a small but growing number of women coaches in the NFL. The selection as national team coach prompted the question of if there will soon be a women head coach in the NFL.

“I think that it will happen. It definitely will,” she said. “I do not think you can put a timestamp on it because I think that the proper progression needs to happen so that whomever that is is prepared and ready for that opportunity, does a great job and is put in that position to be successful.”