Notes: Linebacker Jacob Phillips practices after being designated to return from IR 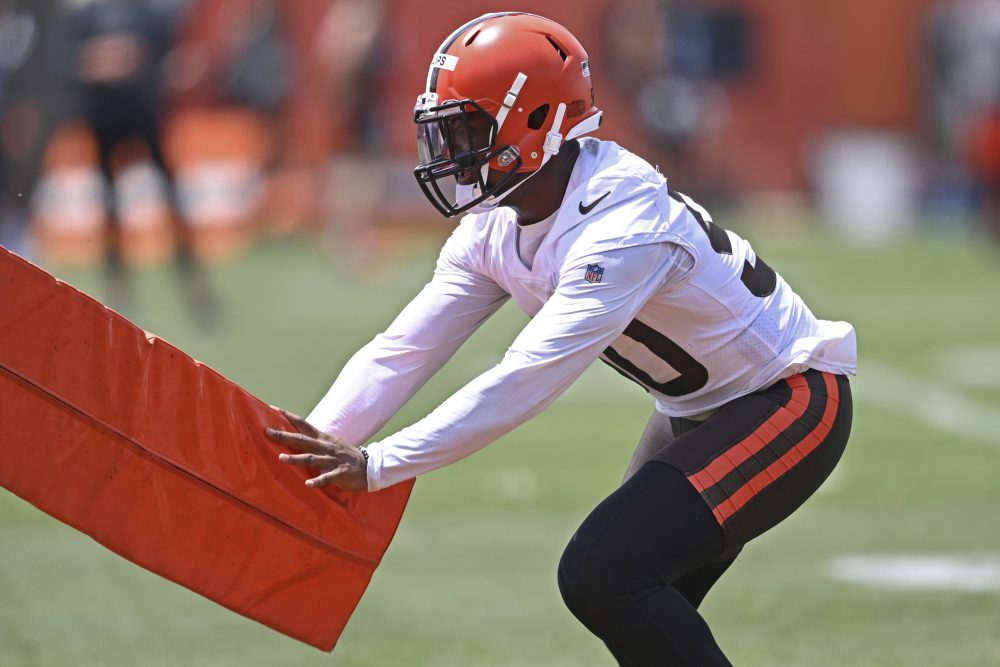 The Browns held out hope second-year linebacker Jacob Phillips would be able to return this season after he suffered a torn biceps in training camp.

The hope began to be realized and rewarded Monday when Phillips practiced after being designated to return from injured reserve. The move opens a 21-day window for him to be activated to the 53-man roster.

“Really excited for Jacob to be back out there in uniform and practicing,” coach Kevin Stefanski said. “I think those are long ways away when you first get injured and you’re spending time in that training room. But just to see him out there, I know that’s just a great reflection of how hard he’s worked.

“Now in terms of when he’s back and when he’s ready, we’ll work through that. Just wanted to put my eyes on him at his first practice, watch the tape, see how he’s doing. But we’ll make those determinations over the next few days.”

Phillips, a third-round pick out of LSU in 2020, was injured Aug. 19 in the first of two joint practices against the Giants. The biceps tore when he reached out to defend someone running a route.

The Browns (6-6) used one of the original 53 roster spots on him after the preseason to allow the possibility of a return.

Phillips played nine games as a rookie with three starts, totaling 25 tackles, one for loss, a quarterback hit and a pass defensed. He injured a knee in the opener and missed time.

Middle linebacker Anthony Walker Jr. said Phillips remained a key piece of the team throughout the rehab process this season.

“True professional. You talk about somebody that’s ever since he’s been out came in with the mindset that I’m going to help the team any way possible while also getting my rehab in and trying to get back as fast as possible to help the team,” Walker said. “He’s been a great voice for us on the sideline, helping us when we come off in practice, watching film, everything like that. He’s been there with us every step of the way.

“So to have him back on the field obviously was great to see No. 50 flying around. The first two drills that we did I told him he was explosive, just confident, trusting himself. So definitely excited to have him back and definitely a boost for our linebacker room.”

All-Pro right tackle Jack Conklin had surgery to repair a ruptured right patellar tendon and is in good spirits, Stefanski said. Conklin was hurt against the Ravens on Nov. 28 and placed on IR last week.

“Jack is a great player. He is an All-Pro. A great person,” Stefanski said. “We are looking forward to getting our eyes on him when he gets back.”

Blake Hance replaced Conklin against the Ravens and while he missed time with knee and elbow injuries, but Stefanski wouldn’t commit to him remaining the right tackle. The Browns host the Ravens on Sunday.

“We will work through all of those types of things this week,” he said.

The options besides Hance are rookie fourth-round pick James Hudson III, who struggled in his only start replacing Conklin, and Alex Taylor (6-foot-8, 301 pounds), who was signed as an undrafted free agent in 2020, has never played an offensive snap in the NFL and is on the practice squad.

“With all of our guys, we are looking at what gives us the best chance, and certainly at the offensive line, you have to replace a guy like Jack, that is not easy,” Stefanski said.

Rookie receiver Anthony Schwartz, a third-round pick out of Auburn, remains in the concussion protocol and didn’t practice. He was injured Nov. 14 against the Patriots returning a kickoff.

** Stefanski said it’s to be determined whether No. 3 tight end Harrison Bryant will go on IR with a high ankle sprain suffered in the 16-10 loss to the Ravens. A player on IR must miss a minimum of three games.

** Long snapper Charley Hughlett is progressing through the COVID-19 protocol and the hope is he’s activated later this week. He tested positive Nov. 29.

“He does a really nice job for us,” Stefanski said of Hughlett, who’s been the snapper since the start of 2015. “He has done it at a high level. He is a leader for this special teams group, so we are excited for when he can get back in here.”

The team hasn’t added another long snapper, and linebacker Mack Wilson Sr. is the backup.

** Tight end Stephen Carlson, who’s on injured reserve with a knee injury sustained in the preseason, was placed on the COVID list. He’s been rehabbing with the team.

Stefanski will likely help whoever plays right tackle in pass protection with double teams from a guard, running back or tight end, leaving left tackle Jedrick Wills Jr. to fend for himself.

Wills, the No. 10 pick in 2020, suffered an ankle injury in the opener, was in and out of the lineup the first four games then missed two and has struggled since returning. Pro Football Focus has graded him as the No. 57 tackle this season, including four sacks allowed and three penalties.

“Jed has very high expectations of himself, as do I,” Stefanski said. “He is working very hard. He has had some really good moments, but he is working on his craft.”

As elusive and fast as Ravens quarterback Lamar Jackson is, he’s been sacked an NFL-high 37 times, including seven Sunday in a 20-19 loss to the Steelers. The Browns sacked him twice in the first meeting and will get another chance Sunday.

“I thought Pittsburgh did a nice job,” Stefanski said. “They varied their package up in terms of pressure and coverage.

“Ultimately they got him on the ground. Now, he is hard to get on the ground. The first guy oftentimes does not succeed, so you really have to be relentless to the football when you are playing Lamar.”

Notes: Andrew Berry confident in Kevin Stefanski as play caller, right guy to lead team through adversity
Notes: Austin Hooper will be counted on to carry load at tight end vs. Ravens