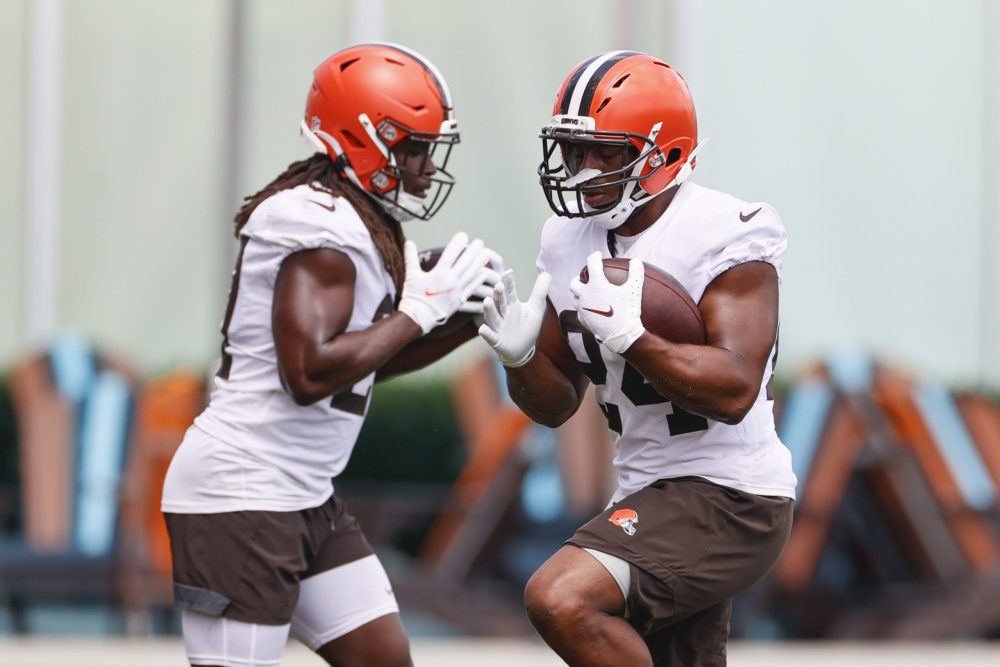 The Browns returned to the practice field Monday with renewed energy.

“They were really engaged,” coach Kevin Stefanski said. “They were moving around and flying around the practice field, so I feel like they recharged with their time away from here.”

Not only did the players have a week off for the bye, they watched AFC North rivals Baltimore (first place) and Cincinnati (second place) lose Sunday, along with wild card contenders Las Vegas and Denver.

“I guess we’re seeing something like that, but right now we’ve got to just focus on ourselves,” running back Kareem Hunt said. “We still gotta win. It don’t matter what the other teams are doing if we don’t come out and win.”

Linebacker Jacob Phillips practices after being designated to return from IR

The Browns (6-6) have five games left and likely need to win at least four to make the playoffs for the second straight year. The homestretch begins with their second straight game against the Ravens (8-4), this time at FirstEnergy Stadium on Sunday at 1 p.m.

“We still haven’t played our best ball yet,” middle linebacker Anthony Walker Jr. said. “We all know that, and to say we’re still in the mix, it definitely makes coming into practice a little bit more worth it.

“We understand that all the goals we had to start the season are still out in front of us. We just gotta take care of business.”

The onus is on the offense, particularly the passing game, to be better coming out of the bye. The Browns have scored more than 17 points only once in the last seven games, and the offense — with Stefanski calling plays — managed only three points off four Lamar Jackson interceptions in the loss to the Ravens.

Stefanski described the bye as “productive.”

“Then you have to sift through it and find out where you can find some action items in terms of where you move going forward.”

One of the topics of conversation was using running backs Nick Chubb and Kareem Hunt on the field at the same time. Stefanski has resisted the idea previously, preferring to alternate them and keep them fresh.

“Those are two great players so we have to make sure that they are involved so that we can be productive in the run game and in the pass game,” he said. “I do think it is something you can do in this system and really any system in terms of plugging in those guys.

“We just want to be mindful and intentional about why we are doing and what we are doing. If you do something like that, you want to have a good reason to do it and put those guys in position to succeed.”

Chubb ranks fourth in the NFL with 867 rushing yards, first with a 5.8 average and has six rushing touchdowns. He has 12 catches for 106 yards and a TD.

With the offense struggling for as long as it has, using arguably its two best playmakers together and more often seems like an alternative worth exploring.

“I would love it, but that is up to them. Whatever the coaches decide,” Hunt said. “If they decide to put us both out there, I am ready for that, and if not, that is fine. I feel like we still will be fine.”

Hunt missed five games with a calf strain before returning vs. the Ravens in a limited role. He’s still rehabbing but said he feels better and expects to play more moving forward.

He doesn’t see a downside to using him and Chubb together.

“The cons, there really are none,” Hunt said. “It is only pros, I think. It could be a good thing.”

“We need to produce on offense, and very simply, we need to score points,” he said. “We really do try to look at every avenue, things that we have done and maybe things that we really have not done. You do need to look at all of them, push it in the middle of the table, have that conversation and see what sticks.”

Despite the team-wide inconsistency and lack of consecutive wins since Week 2-4, the Browns have high hopes for the rest of the season.

“The expectations for all of us are high, and that is really where they should be,” Stefanski said. “I just feel like for all of us, this is a big opportunity.”

“I just think that we know we’re a good football team and we know if we play together and limit the mistakes and dumb penalties and stuff, we can be really good,” he said. “So we’ve just got to keep battling.”