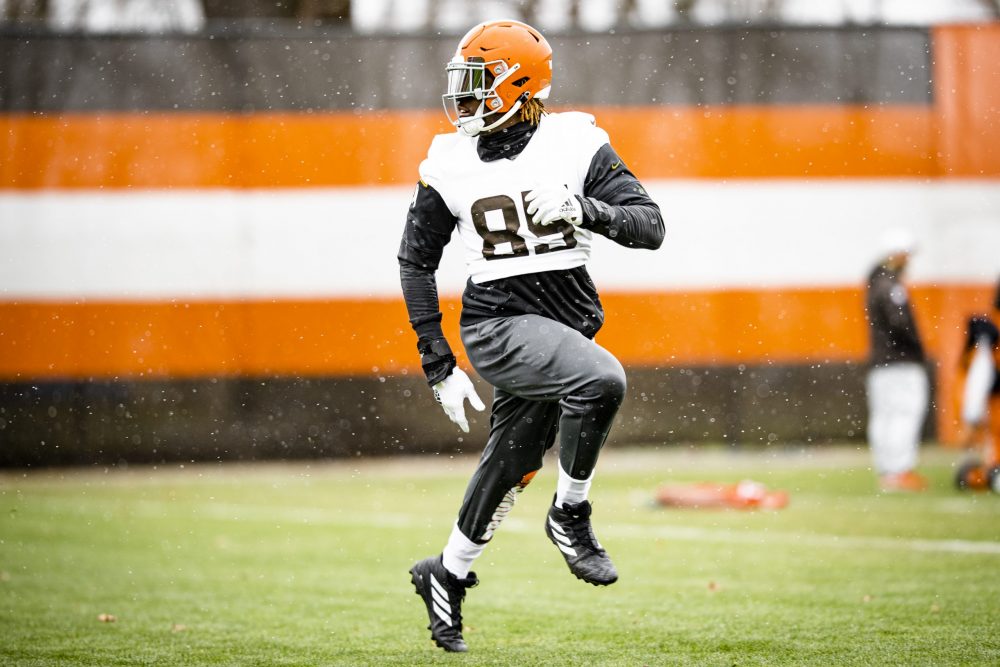 Coach Kevin Stefanski loves to use three tight ends. Together, separately and in combinations.

He’ll likely be down to one of his prized trio Sunday for the critical game against the Ravens at FirstEnergy Stadium.

David Njoku, who leads the team with 407 receiving yards, was placed on the COVID-19 reserve list Tuesday. He hasn’t been ruled out for Sunday, but the odds of him playing aren’t good.

Harrison Bryant, the team’s third tight end, sustained a high ankle sprain Nov. 28 in a 16-10 loss to the Ravens. He’s expected to miss the game Sunday and is a candidate for injured reserve.

Stefanski said previously he’d have to “pivot” without Bryant. If Njoku can’t play, that would require even more adjustments as the Browns (6-6) try to finish strong and make the playoffs for the second straight season.

“We just feel like we have three good tight ends,” Stefanski said Monday regarding the heavy usage of three-tight end sets. “We like those guys. Now with Harrison out, we will have to adjust.

Njoku is one of the team’s few deep threats. He’s averaged 15.1 yards on 27 catches with three touchdowns.

In the loss to the Ravens he had three catches for 35 yards and a touchdown.

Tight end Miller Forristall, an undrafted rookie from Alabama, was signed off the practice squad Tuesday and hasn’t played in an NFL game. The 6-foot-5, 245-pounder caught 44 passes for 505 yards and five touchdowns in 54 games for the Crimson Tide.

Two other options are Ross Travis, who was signed to the practice squad, and practice squad fullback Johnny Stanton IV, who has experience at tight end.

Travis (6-6, 251) has played 28 NFL games with seven starts, catching 14 passes for 142 yards. He appeared in three games with the Cardinals this season. He played basketball at Penn State and was undrafted in 2015.

Stanton was activated from the COVID list Tuesday after testing positive Nov. 29.

The Browns also activated long snapper Charley Hughlett from the COVID list after he tested positive Nov. 29 during the bye week. He’s been the Browns’ snapper in every game since the start of 2015.

“He does a really nice job for us. He has done it at a high level,” Stefanski said. “He is a leader for this special teams group.”

Guard Tristen Hoge was released from the practice squad.

Tight end Stephen Carlson, who was placed on injured reserve in the preseason with a knee injury, was put on the COVID list Monday. He’d been rehabbing with the team.