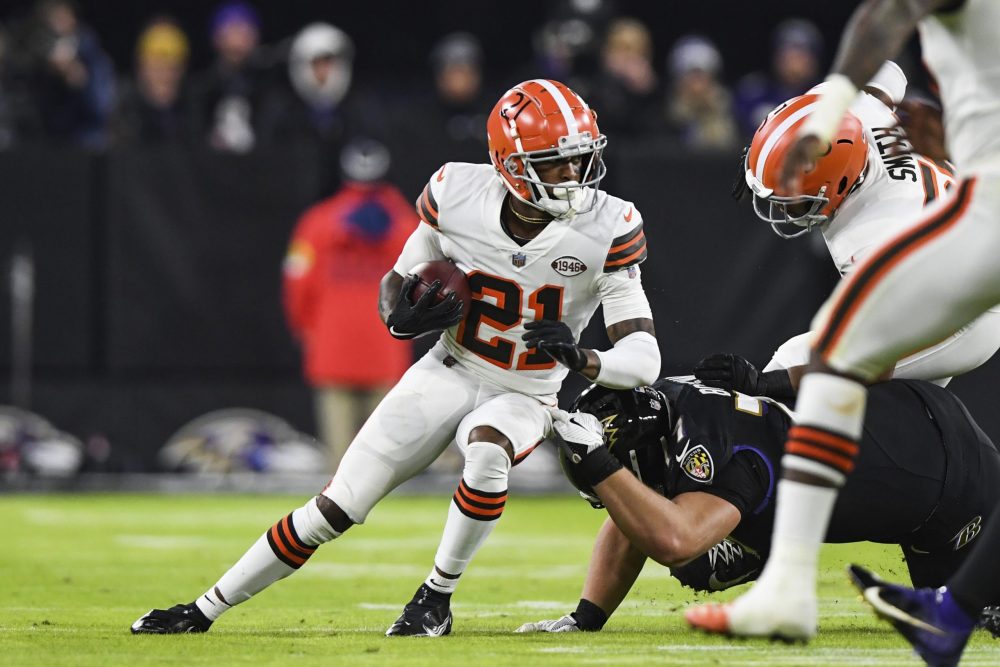 Cornerback Denzel Ward has three interceptions — all in the last four games — and continues to devote time and money to help the community.

The combination of excellence made him the Browns’ choice as Walter Payton Man of the Year. Each team in the NFL selects a winner, and an NFL Man of the Year will be chosen from the group and announced Feb. 10, three days before the Super Bowl.

“What an honor it is to be named the Walter Payton Man of the Year for the Cleveland Browns,” Ward said in the news release Tuesday. “To be mentioned in the same sentence as Walter Payton is a blessing. It means a lot to be nominated and represent my team, and also to be among so many guys in this league who I respect and who have been doing this a lot longer than me.

“As a Cleveland native, it is a priority for me to give back to my community, and I hope I can make an impact in a lot of ways — not just in Northeast Ohio but everywhere. I have been fortunate enough with a great support system that helps keep me going on and off the field, and I am excited to see what is in store next.”

Ward went to Nordonia High School and Ohio State and was the No. 4 pick in the 2018 draft. He’ll be presented the award by ownership before the game vs. the Ravens on Sunday at FirstEnergy Stadium.

“Denzel has always been an exceptional role model and leader for our team and Northeast Ohio through his consistent attitude, actions and performance, which makes him more than deserving of this prestigious award,” owners Dee and Jimmy Haslam and Whitney and JW Johnson said. “As a Cleveland native, we know how much playing for the Browns, giving back to his hometown and honoring his father’s legacy means to Denzel and the Ward family.”

He has a team-high eight passes defensed this year to go with the three interceptions — one returned 99 yards for a touchdown in a win over the Bengals — 29 tackles and a half-sack.

Ward’s family established the Make Them Know Your Name Foundation in honor of his father, Paul, who died of a heart attack in 2016 and used that phrase. The name of the foundation is a mantra for Ward and inspired by his dad’s message to him before athletic competitions and other public events.

The mission is to prevent heart-related deaths with early detection and intervention.

Ward has donated money, equipment and time to schools in the area and provided automated external defibrillators, CPR kits and training. He held a free football camp for more than 400 kids in 2019.

Last year during the COVID-19 pandemic he covered the largest monthly expense for 21 people who were suffering financially. He’s also an active participant in the team’s other community projects.

“Denzel’s philanthropic heart even outsizes his penchant for making big plays on the field,” general manager Andrew Berry said. “We commend Denzel’s team-first and community-focused mindset as he continues to commit significant time and resources to making Cleveland better.

“His efforts … will make a lasting impact that will endure well beyond his football career.”

Defensive end Myles Garrett was the Browns’ choice in 2020 and receiver Jarvis Landry in 2019.

“The Walter Payton Man of the Year Award is one of our league’s most prestigious honors, and Denzel’s production on the field and in our community certainly make him worthy of this nomination,” coach Kevin Stefanski said. “He has played at a high level this season, continually working to improve while helping our team win games, and that dedication extends to his involvement in Northeast Ohio.”

The Man of the Year award has been given annually since 1970.