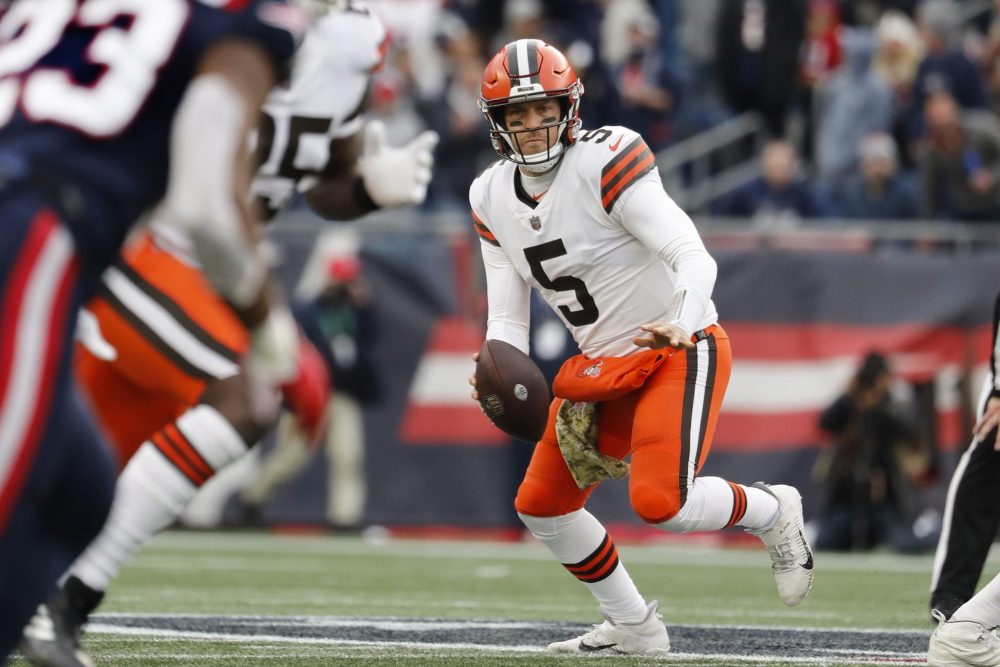 Special teams coordinator Mike Priefer is in line to be the acting coach Saturday against the Raiders. He gave a strong endorsement of the man most likely to be playing quarterback.

“Thank God we have Case Keenum,” Priefer said Wednesday over Zoom. “If you had a really young quarterback and an inexperienced quarterback, it might be tougher. But Case is going to run the game plan exactly how it should be run and I know the whole team has confidence in him.”

Priefer and Keenum were thrust into the spotlight Wednesday, as coach Kevin Stefanski and quarterback Baker Mayfield were among the Browns’ latest series of positive COVID-19 tests that have depleted the roster. They haven’t been ruled out for the critical game but are unlikely to be available.


“Pretty unique. I would say nothing really surprises me about the NFL these days though,” said Keenum, a nine-year veteran. “It just kind of adds one more thing to the portfolio, if you will, of just strange occurrences and different situations that come up. That’s why you prepare every day to be ready to go when your number’s called, and I think that number’s getting called.”

He has the support of his teammates.

“I am looking forward to seeing Case sling it a little bit,” linebacker Malcolm Smith said.

Commentary: NFL won’t bend for anything, including a pandemic or severely disadvantaged Browns roster

The timing is difficult for Mayfield. Not only are the Browns trying to make the playoffs for the second straight year, last week he declared himself as healthy as he’s been since Week 2, when the labrum in his left, non-throwing shoulder tore. Since then he suffered a fracture in the shoulder and a series of lower-body injuries that bothered him on the field.

Mayfield is 6-6 as the starter, completing 62.8 percent for 2,603 yards, 7.6 per attempt, 13 touchdowns, seven interceptions and a 90.1 passer rating. He is vaccinated and asymptomatic.

“Disappointed,” coordinator Alex Van Pelt, who will call the plays if Stefanski can’t coach, said of Mayfield’s reaction to testing positive. “There is nothing we can do about it at this point. We just have to roll with the punches.

“I told him if you are not back this week, I expect you to coach me up on Green Bay’s defense next week.”

Stefanski said Mayfield was “locked in” during the virtual meetings.

“Never fun, especially when you feel pretty good,” Keenum said of Mayfield likely missing the game. “I think you guys all saw how healthy he looked last week. I thought he played really, really well. Did a great job, distributing the ball and making some big plays for us and closed the game out for us.”

Keenum’s lone start in two years with the Browns since signing a three-year, $18 million deal came Oct. 21 in a 17-14 win over the Broncos on a Thursday night after Mayfield suffered the broken shoulder bone. He completed 21 of 33 passes (64 percent) for 199 yards, a touchdown and a 90.3 rating.

The practice Wednesday was switched to separate walkthroughs for the special teams, offense and defense to spread out and limit contact among players. The hope was for a full-speed practice Thursday, the last chance for one on a short week.

While up-tempo repetitions would be helpful, Keenum said this week is similar to before the Broncos game when the practices were glorified walkthroughs. Nick Mullens, who went 5-11 as a starter with the 49ers, would be elevated from the practice squad to back up Keenum.

“We got a good game plan coming in,” Keenum said. “The coaches are prepared as well and doing everything we possibly can mentally to go through the reps in our head and be ready to go for all the different looks that these guys can give us.”

“I go out each day with the confidence knowing all those things I’ve done in the past and all the work that I’ve put in each and every day, this year, last year, my whole career, I get to go put it on the line and enjoy doing what I love to do and that’s play football,” he said. “On Saturday, rain, snow, sleet or whatever comes our way, which it looks like it’s going to be a fun one, we get to go out there and throw the football around. So I’m excited to do that.”

Priefer spent a year with Keenum in Minnesota and then the last two in Cleveland.

“Obviously I feel bad for Baker, he’s the leader of this football team as our quarterback. Losing him hurt,” Priefer said. “But the great thing about Case, he’s an amazing young man. He’s always stepped up to the occasion when his name was called.”

“I have the utmost confidence in Case,” Van Pelt said. “He’s really a true pro. We’re very lucky to have him. He’s a guy that can come in and win one game or a bunch of games for you, he’s shown that in the past.

“Regardless of who he’s out there with, we know that the moment won’t be too big for him, he’s been there before and he’ll be calm, collected, be a great leader for us.”

Myles Garrett says “I’ll take it,” scoops up fumble he forced and scores 1st NFL TD
Notes: QB Nick Mullens excited to get 1st reps with 1st-team offense as he prepares to start Monday vs. Raiders