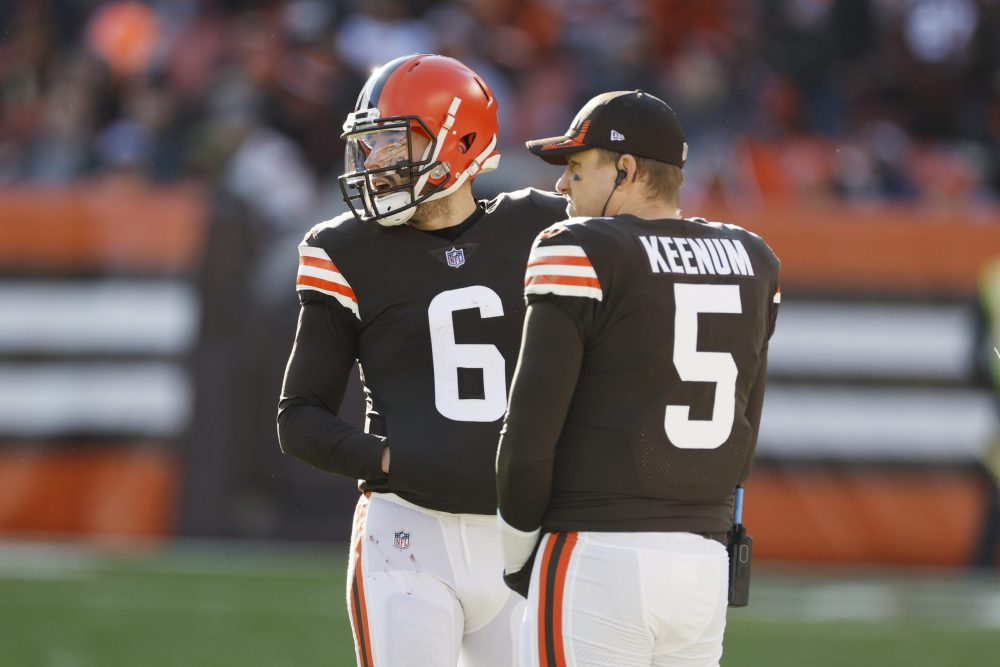 Q: Why would the Browns not wait until the 2 p.m. Monday deadline to make the final calls on players on the COVID-19 reserve list?

A: I understand the question. I also know the Browns would do everything they could to get some key players back off the COVID list. So I’m sure the organization determined there wouldn’t be a benefit to waiting until the last possible moment to test.

They have access to the viral loads from the testing, although those aren’t always linear from day to day and test to test. But for the Browns to say the roster was set in the morning, they must have believed nothing would’ve changed with more testing.


Baker Mayfield, Kevin Stefanski out for game vs. Raiders; Nick Mullens will start at QB

Q:
Which 1-year guys might receive an extension offer from the Browns? Which guys might be candidates for a restructure?

A: My list starts with defensive end Jadeveon Clowney. I feel like the Browns have dodged a bullet given his long injury history — he missed one game with a sore knee and will miss the Raiders game with COVID-19 — and would be leery of giving him a multiyear contract. But his solid play all year, including back-to-back strong games against the Ravens, has me thinking he’d be worth bringing back on a one-year deal in 2022.

While we’re on defensive ends, Takk McKinley has missed time with a groin injury but has been effective in his role as the third end. If he’s not trying to break the bank, he’d be worth bringing back, perhaps even on a two- or three-year deal.

I’d also pick up the second year on nickelback Troy Hill’s two-year contract. He hasn’t been great but is fearless in the run game and has proved to be a good blitzer at a position that continues to grow in importance.

I’d consider bringing back middle linebacker Anthony Walker Jr. His role would be reduced with the emergence of Jeremiah Owusu-Koramoah and expected emergence of Jacob Phillips, but he’s a smart, strong leader.

When it comes to restructuring, I think of receiver Jarvis Landry and tight end Austin Hooper. Both are due to make a bunch of money and haven’t put up the commensurate numbers for different reasons. They both have value and could return on their current deals — the Browns are seemingly locked in with Hooper — but the team should seek more financial flexibility.

Q: I see major changes coming at tight end and wide receiver in the offseason. Do you think these position groups will look different next season?

A: An interesting question.

The transformation at receiver began with the departure of Odell Beckham Jr. For all his flaws, his absence reveals the lack of a No. 1 receiver, so I do expect significant moves. As referenced above, that could include a restructured contract for Landry or his release to avoid paying his $15 million salary in 2022. Donovan Peoples-Jones is a keeper, but I don’t see him as a future No. 1. Rookie Anthony Schwartz hasn’t shown much but the ability to run fast. Rashard Higgins’ days are numbered. So the team will need to add at least a wideout or two in the offseason.

I’m more torn about tight end. I could see general manager Andrew Berry trying to re-sign David Njoku on a reasonable deal and paying Hooper the third year of his contract. In that case, the room would look the same. I could also see Njoku being allowed to walk and the Browns biting the bullet, not paying Hooper and taking an $11.25 million cap hit.

Q: My question is why aren’t all asymptomatic vaccinated players removed from the list? That’s the rule going into this week.

A: The rule put into effect says asymptomatic vaccinated players largely don’t have to test. But once a player has tested positive, he must go on the COVID list. While the last week inspired the change to reduce the number of positive tests, the NFL didn’t go as far as to say players it knows are positive can play.

The Browns’ timing was bad when it came to the omicron outbreak throughout the NFL.

Q: If Baker Mayfield is the guy and franchise quarterback of the future in the eyes of Andrew Berry and Kevin Stefanski, then why haven’t they signed him before handing out all this money to others?

A: I have two answers for you. Before the season I believed the organization had determined Mayfield was their franchise quarterback and it was only a matter of time before an extension. I think Berry and chief strategy officer Paul DePodesta wanted to let the quarterback market set and make sure the start of the season affirmed their beliefs.

That didn’t happen due to injury and performance. So I think the organization no longer is confident he’s the long-term answer. It hasn’t closed the door but needs to see more either over the rest of this season and/or in 2022. The big question is whether they commit to him as the starter for next season or bring in a replacement or competition.

Q: What are the long-term plans for Nick Mullens? The Browns were eager to pick him up and keep him on the practice squad all season. Do they see him as a potential lower-cost replacement for Case Keenum next season or is he simply practice squad fodder?

A: The Browns really like Keenum but I’m sure they wouldn’t mind saving some salary cap space by not paying the backup quarterback $6 million next year. I could see Mullens being the choice, especially if he plays well against the Raiders.

I’d expect Mullens to get a chance to be a backup somewhere.

Q: There has been a lot of talk about both getting Nick Chubb and Kareem Hunt on the field together as well as simply finding more opportunities for Hunt, inarguably one of the Browns’ most dynamic playmakers. This may be insane, but why not use Hunt on at least kickoff returns, if not punts as well. He can obviously catch, and up until very recently has been incredibly durable. Is it a different skill set, or just too risky? I’d like to get Hunt more touches without abandoning Stefanski’s vision for the offense, and think we’ve run too few screens, frankly. We may be in the top 10, or even No. 1, but our personnel and blocking schemes seem to beg for screen plays.

A: The thought is it’s too risky, and too little reward, to use a prime offensive player as a returner. I don’t have much doubt Hunt could handle life as a returner and probably be good at it with his relentless style, but his value to the offense is too important to subject him to injury.

I agree Hunt should get as many touches as possible. He’s simply one of the team’s best playmakers. The Browns have been a good screen team, so more would seem to be better.

Q: The Browns front office has clear guardrails guiding their strategy of which positions they are willing to spend big dollars on compared to which positions they believe they can find underpriced bargains. The 2021 season has had more injuries and roster movement than a normal season, how has the Browns roster depth strategy held up in your view?

A: Let’s take this COVID crisis week out of the equation.

Other than that, I think the roster construction has led to enough depth. I don’t recall a game when the team was severely short-handed, and the commitment of resources in the secondary has paid off.

The one position where there may be an argument is tackle. When backup swing tackle Chris Hubbard was lost for the season with a torn triceps, the backup plan wasn’t great. Guard Blake Hance and rookie James Hudson III have come off the bench to start and have struggled. But I’m not sure I blame Berry for not having four starting-caliber tackles. Those guys are at a premium.

Q: Tedric Thompson, Brian Allen, Bryan Mills, Willie Harvey, Alexander Hollins, et al. This may strike as a somewhat silly question, with initial responses feeling predictable and obvious, but wondering what you might make of the Browns’ seemingly being loyal to those with whom they’ve worked previously.

Q: Today you are Doctor Petrak like your mother wanted. Can you explain what asymptomatic means in the case of the players? Have a great Holiday!!!

A: Happy holidays to anyone still reading this far! I take the term at face value: no symptoms. But I’m sure not everyone treats it the same, meaning some might consider having sniffles or a slight headache asymptomatic.

Mailbag: Why aren’t Nick Chubb and Kareem Hunt on field together?
Mailbag: Do Browns believe Baker Mayfield’s down year is due to injuries? Which unrestricted free agents are worth re-signing?