No. 3 QB Nick Mullens handles himself well, leads comeback that doesn’t stand up 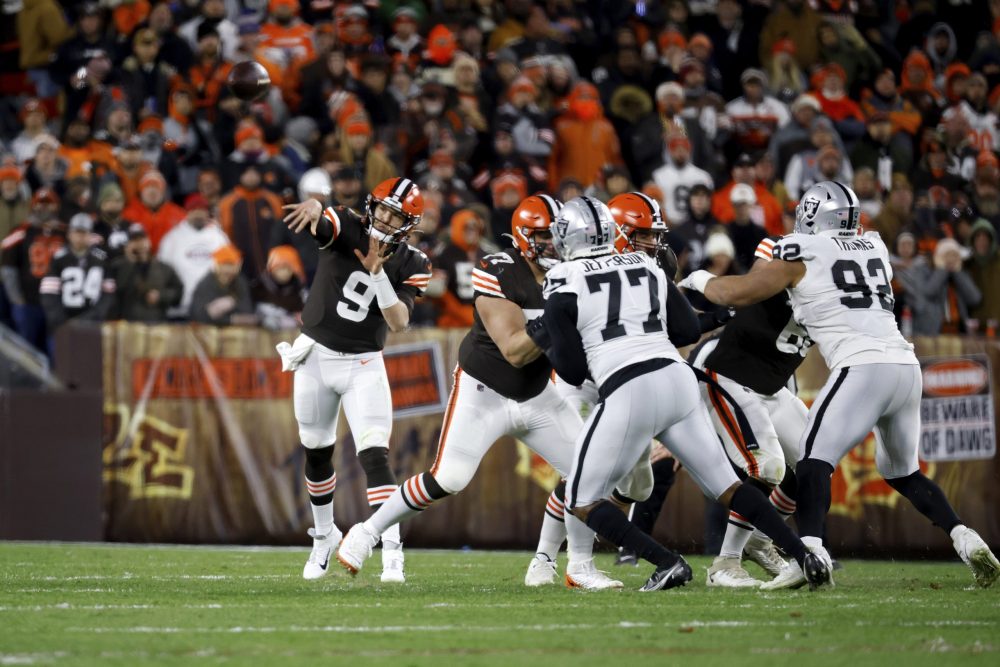 CLEVELAND — Having a third-string quarterback with experience like Nick Mullens is a luxury Cleveland needed Monday night.

Mullens, who made eight starts for San Francisco in 2020, may not have lit up the box score but he put the Browns in a position to win with first place in the AFC North on the line.

Las Vegas, however, had other plans, converting a field goal as time expired to come away with a 16-14 win at FirstEnergy Stadium.


“In my mind you kind of compare it to a rain delay in a baseball game,” said Mullens, who made the start because starter Baker Mayfield and backup Case Keenum landed on the team’s COVID-19 reserve list. “In your mind, you have to say ‘you are playing, you are starting.’ So that’s how I approached the entire week once things happen.

“Coach (Alex Van Pelt) let me know today that I was officially starting. So just ready to go. You prepare, work as hard as you can and leave it all out on the field. Unfortunately it just wasn’t enough tonight.”

The quarterbacks were just two of 18 players from the active roster on the reserve list, one of the reasons the game was moved to Monday after originally being scheduled for Saturday.

Mullens filled in well enough, completing 20 of 30 passes for 147 yards and a touchdown. More importantly, he didn’t turn the ball over and he didn’t take a sack — despite having to play behind a makeshift offensive line that saw starting left guard Joel Bitonio move to left tackle because both starting tackles were out with COVID.

“Joel’s a stud,” Mullens said. “Talk about what it means to be a Cleveland Brown, Joel is the ultimate Cleveland Brown. Whatever’s asked of him, he does, and obviously he’s done it for a long time here.

“Being able to share the huddle with those guys means a lot, they’re a really good group. You can tell they have chemistry, they work hard, they work together and they did a really good job up front.”

Commentary: On this day, these Browns deserved a better fate

It took awhile for the Browns offense to get going after being limited to 84 yards and no points in the first half. But it strung together two touchdown drives to take a 14-13 lead with 3:45 left.

Mullens was at his best during Cleveland’s second scoring drive, taking the team 80 yards on 14 plays that milked 8:22 off the clock. Tight end Harrison Bryant and receiver Donovan Peoples-Jones came up with big catches in every key situation.

Mullens found Bryant for a 5-yard gain on the first of three third-down conversions. The next two went to Peoples-Jones, who shook off a couple of drops in the first half to make tremendous catches for 25 and 11 yards that placed Cleveland at the Raiders 11-yard line.

Nick Chubb scored on the next play, but it was nullified by a holding penalty on right guard Wyatt Teller. The Browns regrouped and acting coach Mike Priefer went for it on fourth-and-5 from the 6.

Mullens scrambled left, and when Bryant’s defender came up to play him, he dumped it off to the wide-open tight end for the go-ahead score.

“Oh, man, the guy was confident when he took over,” Bitonio said. “He’s had pretty much a season worth of starts under his belt. To have that experience in your third quarterback is pretty rare.

“He was mentally prepared to play all season. To see him come out and perform the way he did, I thought that was major props to him.”

Cornerback Greedy Williams came up with an interception, giving Cleveland a chance to ice the game, but it could not convert a third-and-3 and the Raiders stole the win with a clutch drive.

“It hurts,” Mullens said. “Everybody is going to look at that one play and not being able to finish it, but it’s the NFL. Games are chain links of events. We had a lot of three-and-outs, just missed opportunities, so you can’t really pinpoint one reason why we lost.

“It happened the way it happened, but it really hurts. It was so cool, the stadium was rocking, I really believed in the fourth quarter that this night was destined for Cleveland. Sometimes it doesn’t work out like that.”

Notes: QB Nick Mullens excited to get 1st reps with 1st-team offense as he prepares to start Monday vs. Raiders
Denzel Ward, who’s headed back to the Pro Bowl better and stronger, helps defense find stride over last two months