Myles Garrett injures groin, says someone will have to “kill me” or “break my leg” to get him off field 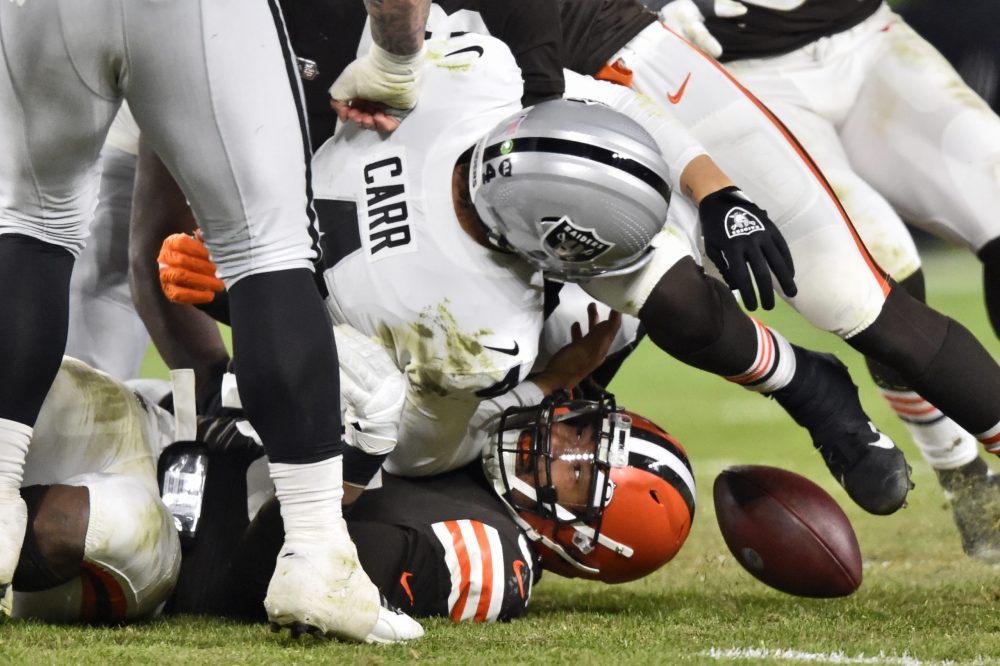 CLEVELAND — With many of his teammates unable to play because of COVID-19, Myles Garrett gutted his way through a groin injury during the second half Monday night. And he almost saved the day.

The Browns star defensive end put everything he had into one last leap as the team desperately tried to block Daniel Carlson’s 48-yard field goal as time expired. Garrett nearly got his hand on the ball, but it inched past and through the uprights to give Las Vegas a 16-14 win at FirstEnergy Stadium.

“It was tough,” Garrett said. “It hurt, but everybody’s hurting. I don’t want to say I’m special.

Garrett confirmed after the game the groin injury was a new one suffered Monday. He’s played through other ailments this season that haven’t held back his production, as he entered Monday with 15 sacks, tied for second in the league behind T.J. Watt’s 17.5.

Against the Raiders, he had three tackles — one for a loss — and did not sack Derek Carr.

“Everybody has to play through pain, injury,” Garrett said. “Everybody’s dealing with something. So I don’t feel sorry for myself, I don’t want anybody to feel sorry for me. I’ve gotta get right, get ready for Christmas day. We’ve got another game.”

Commentary: On this day, these Browns deserved a better fate

The Browns (7-7) have a short week before playing in Green Bay on Saturday.

“He is a tough guy. He fought through it like a lot of our guys,” acting coach Mike Priefer said.

Despite not being 100 percent, Garrett took on his usual workload at defensive end and caused havoc at the line of scrimmage to help his teammates disrupt the Raiders offense. Cleveland finished with two sacks and four tackles for a loss and held Las Vegas to 98 yards rushing, led by Josh Jacobs’ 52 on 15 carries.

The Browns only gave up one touchdown and held the Raiders to 13 points with 1:50 to play, however Las Vegas found enough offense on its final drive to get into field goal range. Even though the game was the difference between first and last in the AFC North, with three weeks left — including two games in the division — the Browns’ playoff hopes are still alive.

“I mean, it’s completely up for grabs still,” Garrett said. “We’ve just got to keep on working, keep on winning. The goal is still to win out, and our destiny is still in our favor if we continue to do the things we need to.”

No. 3 QB Nick Mullens handles himself well, leads comeback that doesn’t stand up