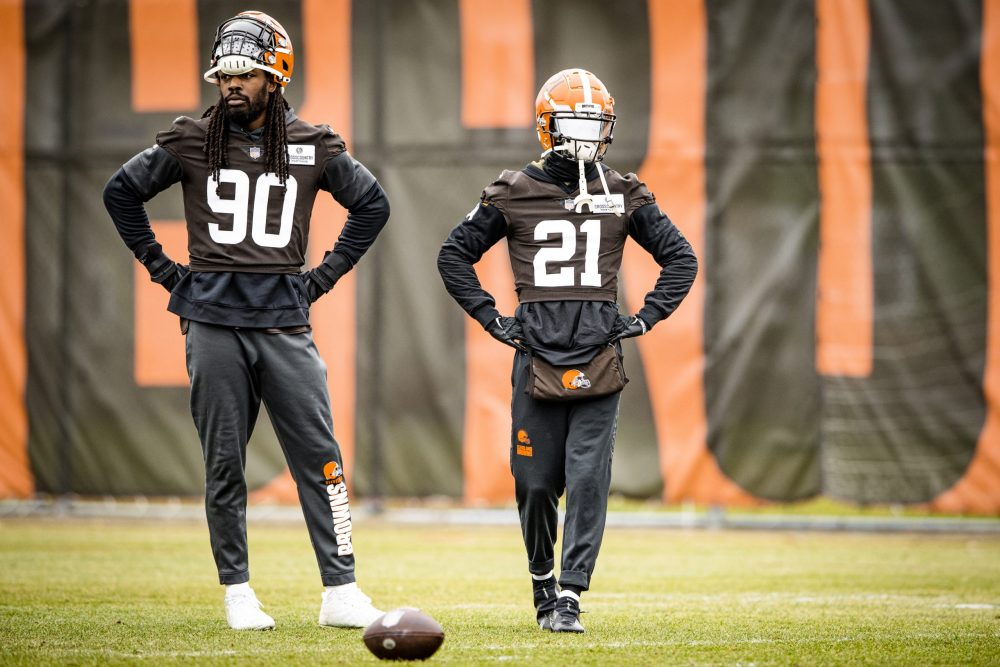 BEREA — The rebuilt defense took awhile to come together and play up to its potential but has been reliable over the last two months, giving the Browns a strong chance to win in eight of the last nine games.

The offense’s inconsistency has lingered, keeping the Browns from winning two in a row since Weeks 2-4 and jeopardizing a golden opportunity to reach the playoffs for the second straight season.

Cornerback Denzel Ward joined end Myles Garrett in driving the defensive transformation with consistently high-level performances and one of the season’s signature plays — the 99-yard interception return for a touchdown to jump-start the 41-16 win over the Bengals in Cincinnati. Ward was rewarded with his second Pro Bowl selection, which was announced Dec. 20 before the Raiders game.

“It meant a lot,” he said Tuesday on a Zoom call. “Much credit to my coaches, my teammates, my family and everybody who played a big role.”

Ward’s previous Pro Bowl nod was as a rookie in 2018 after being the No. 4 pick out of Ohio State. He had three interceptions, 11 passes defensed, five tackles for loss, a forced fumble and two fumble recoveries.

He has three interceptions, a touchdown, 10 passes defensed, a half-sack and two quarterback hits this season and believes he’s grown in the last three years.

“I’m definitely a smarter player,” he said. “I definitely feel I changed my body from my rookie season till now, gained some weight, put on a lot of muscle and just trying to find a way to come in and help my team get better.”

The only legitimate knock on Ward through the first three years was he didn’t play a full season. He missed three games as a rookie and four each the next two years with a variety of minor injuries and COVID-19.

He’s played 14 of 15 games this year, sitting out the Steelers game Oct. 31 with a hamstring injury. He’s been on the field for nearly 100 percent of the snaps otherwise.

Ward has solidified himself as a serious candidate for a big-money contract extension in the offseason. In April the Browns picked up the $13.29 million fifth-year option on his rookie contract for 2022, but he could join Garrett, guards Joel Bitonio and Wyatt Teller and running back Nick Chubb as cornerstones signed to long-term deals.

“Man, I’m so, so happy for Denzel,” defensive back M.J. Stewart Jr. said. “He’s put together a tremendous season. He’s always been a lockdown corner and he’s proving it again.

“He’s a big asset to this team. He really can shut down one side of the field.”

The beginning of the year featured quality defensive games in wins against the Bears and Vikings (13 total points allowed) followed by disasters in losses to the Chargers and Cardinals (84 points allowed). The Browns have evened out the performances, allowing more than 20 points just three times in the last nine games, and more than 24 only in the 45-7 debacle in New England on Nov. 14.

“We knew what type of defense we could be in camp and coming into the season and guys are making plays and they’re being themselves,” Ward said.

Stewart said a key was players and coaches learning what everyone does best.

“We’re a very special group,” he said. “We really jelled together and we take pride in that.

“We set a standard over this year of how we play defense over here at the Browns, so whenever or whoever gets the opportunity, it’s kind of like there’s no second strings, everybody is first-string caliber and everybody is ready to step up and make plays when it’s their time.”

The defense will need to continue the strong stretch as the Browns (7-8) try to beat the Steelers (7-7-1) and Bengals (9-6) and hope for help to win the AFC North for the first time. The defense held the Raiders to 16 points and the Packers to 24 the last two weeks despite Garrett playing through a groin injury and several starters out with COVID-19 and injuries, especially on the line and in the secondary.

“It has been really impressive,” left guard Joel Bitonio said. “Obviously the guys who have stepped up for them, they really have not lost a beat. I think they are buying into the scheme, and they are playing off of each other.”

Ward’s first few games were uneven, with coordinator Joe Woods saying he was pressing to try to make plays. Ward didn’t agree with the characterization he got off to a slow start.

“I haven’t really given up too much out there on the field, like yards or anything, touchdowns,” he said. “I feel like I definitely picked it up throughout the season and raised my play.

“Coach Woods, all those guys, they challenge me and I appreciate that. I accept the challenges that they bring to me and I just try to go out there and be the best player I can for this team.”

The offense’s inability to match the defense’s improvement could lead to division within the locker room.

The defense kept Packers MVP quarterback Aaron Rodgers from dominating Saturday in a 24-22 loss. His three first-half touchdown drives all followed Baker Mayfield interceptions, and the Packers scored only a field goal in the second half.

In the 16-10 loss at Baltimore, the Browns offense managed only three points off four interceptions of Lamar Jackson.

“Honestly, I have not personally felt any tension between the defense and the offense,” Bitonio said. “Our defense has played well, especially the last few weeks, and we appreciate that. There is no tension. That might be something in years past, but the guys are focused on winning and taking care of their business.

“Honestly, we want to capitalize when we get the ball and really try and play complementary football, but it is not something that is tearing our team down. Really we have not even had a talk about it. There is no separating the locker room. I think guys are in a good headspace and we are in a good position as a team.”