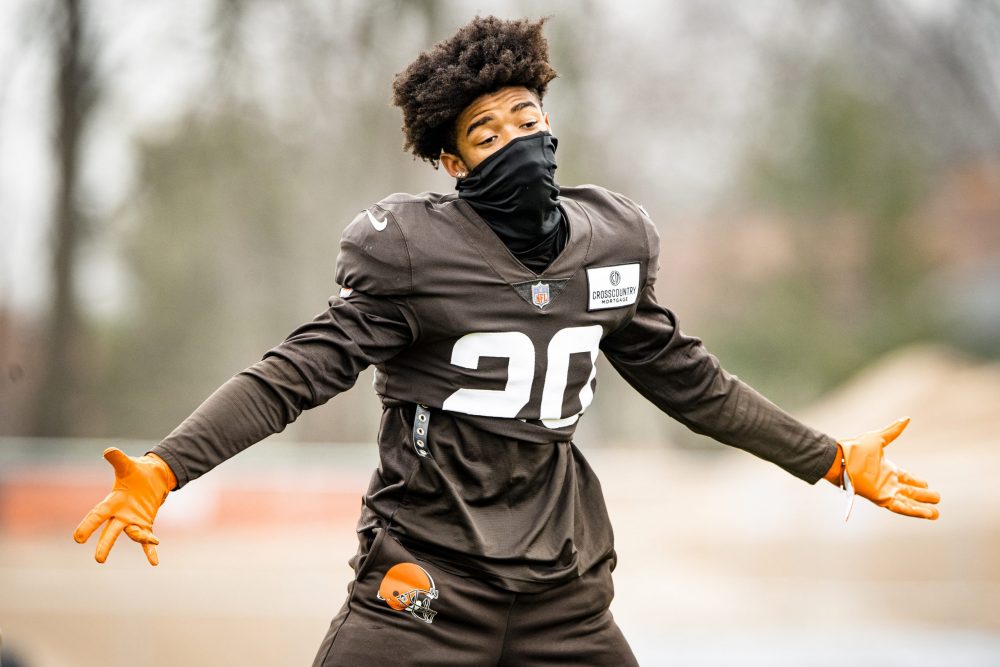 Newsome practiced for the first time since sustaining a concussion Dec. 10 on the last play of practice. He tested positive for COVID on Dec. 22 and cleared both protocols.


The Browns (7-8) need to win their final two games, at Pittsburgh on Monday night and vs. Cincinnati on Jan. 9, to have a chance at winning their first AFC North title. The Browns also need the Chiefs to beat the Bengals on Sunday, and the Ravens to lose one of their last two games.

After a COVID outbreak left the Browns short-handed in two-point losses to the Raiders (16-14) and Packers (24-22), the roster is returning to normal. Only backups remain on the COVID list: linebackers Elijah Lee and Tony Fields II, tackle Alex Taylor and quarterback Nick Mullens and safety Tedric Thompson from the practice squad.

Hunt has missed the last two games after missing five earlier in the year with a calf injury.

“I want to see how he looks throughout the week,” Stefanski said. “If we can get him back, I think that would be a big boost to our team. He is a great, great competitor so we are hoping that he can make it back.”

Rookie linebacker Jeremiah Owusu-Koramoah didn’t practice with what the team said was a non-COVID illness.

He was injured Dec. 20 against the Raiders, didn’t practice last week but played 52 of 59 snaps Saturday vs. the Packers. He had a quarterback hit and a tackle assist and said the groin felt like “sh–.”

“He certainly was not the 100 percent version of Myles we have seen this season,” Stefanski said.

His teammates were inspired by Garrett playing through the pain.

“For our leader to be fighting through an injury and still giving it his all, it’s like ‘why can’t we all do that?’” defensive back M.J. Stewart Jr. said. “If Myles can do it, then we all can do it.”

Kicker Chris Naggar was released from the practice squad after making his NFL debut in the loss to the Packers while McLaughlin was on the COVID list. Naggar missed his first extra point, then made a 37-yard field goal and an extra point.

The Browns signed Chris Blewitt to the practice squad Wednesday. He made his NFL debut this year, going 2-for-5 on field goals and making both extra points with Washington.

Commentary: For years, Big Ben has been big trouble for Browns

Rookie receiver Anthony Schwartz had never scored a touchdown in the NFL but had a plan if he got into the end zone vs. the Packers.

“It felt great,” the third-round pick said. “Going into the game I was thinking, ‘OK, if I score, I have to do the Lambeau Leap in Lambeau.’ Luckily I saw a crowd of Browns fans right in front of me so I just had to go for it.”

Schwartz’s 5-yard touchdown was his only catch and he added 24 yards on a pair of end-arounds. He hadn’t touched the ball on offense since Nov. 7. He sustained a concussion Nov. 14 returning a kickoff against the Patriots and wasn’t cleared from the concussion protocol until Dec. 18.

“Really just has been the whole motto for me this year is control what you can control,” he said.

Stefanski never met John Madden but had deep admiration for the Hall of Famer who died this week.

“I would think any football fan my age growing up you were playing ‘Madden,’” he said. “I think my first Madden game, I believe, was ’93. It was just such a big part of our childhood growing up and playing with your friends. He was ubiquitous in all of that.

“As a commentator, he was a lot of times doing those NFC games for Fox, so growing up an Eagles fan, anytime you heard Madden and (Pat) Summerall, you knew it was a big game. He was definitely on in the background of my life. I do not know if anybody has had a bigger impact on our game.”

“That is something I will obviously keep internal,” Stefanski said. “I am not on social media, and I would tell you the vast majority of it is just background noise.”