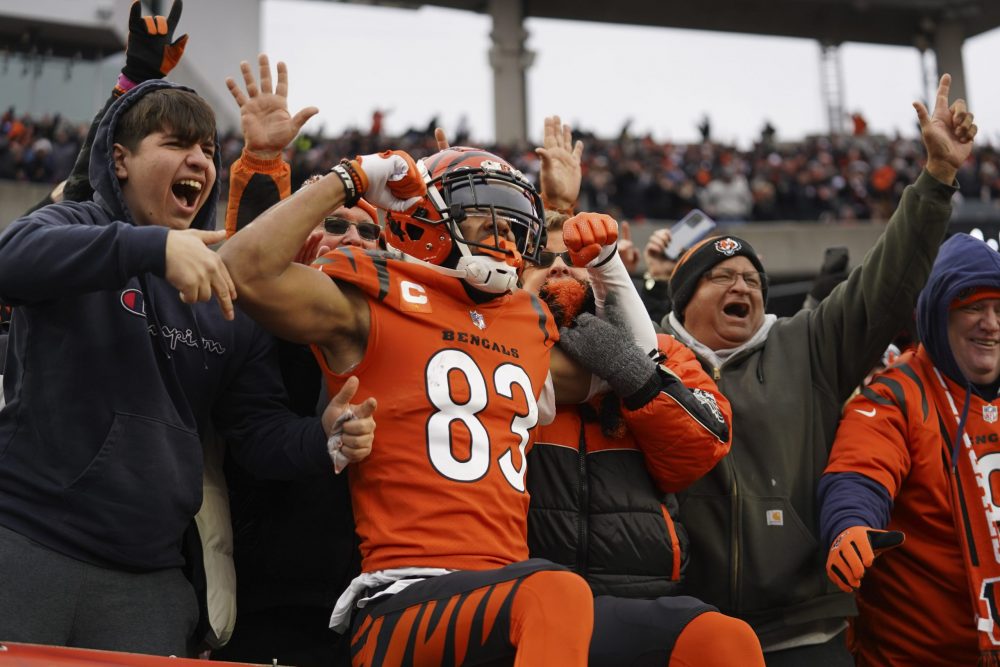 After all the inconsistency, frustration and disappointment of the first 16 weeks of the season, the Browns were finally sunk Sunday.

As they arrived in Pittsburgh for the game Monday night, their hopes of returning to the playoffs for a second straight year were extinguished.

The Bengals won the division with a come-from-behind 34-31 victory over the Chiefs in Cincinnati. The Browns’ slim chances for a wild card spot were eliminated later in the afternoon when the Chargers beat the Broncos 34-13.

The Browns (7-8) knew this was a possibility as they prepared to face the Steelers (7-7-1) in what’s likely to be quarterback Ben Roethlisberger’s final game at Heinz Field. Cleveland would’ve needed only to win its final two games to claim the division title if the Bengals (10-6) and Ravens (8-8) had lost Sunday.

The Ravens did their part, falling 20-19 to the Rams on an Odell Beckham Jr. touchdown catch with 57 seconds left. He was cut by the Browns at midseason after the relationship was deemed unsalvageable and set up the winning score by converting a fourth down with a tough catch.

But the Bengals clinched the North with a last-second field goal after a series of plays from the 1-yard line, including multiple ones with penalties. Rookie receiver Ja’Marr Chase caught 11 passes for 266 yards and three touchdowns for the Bengals, who held Patrick Mahomes and the Chiefs to a field goal in the second half after they cruised to 28 points before halftime.

The Browns lost control with their play in the first 15 games. They haven’t won consecutive games since Weeks 2-4 and lost six games by six points or fewer, including five when quarterback Baker Mayfield had the chance to lead a go-ahead drive in the final minutes.

The last two games were perfect examples of the frustration and missed opportunities. If the Browns had won either, they would still control their chance to win the North. Instead they lost 16-14 to the Raiders and 24-22 to the Packers.

The two-game losing streak was the second of the season after none in Stefanski’s first year.

Expectations for this season only began at a return to the playoffs after last season’s success, the return of the entire offense and an offseason overhaul of the defense. But Stefanski didn’t duplicate his Coach of the Year performance, Mayfield regressed, Beckham flamed out and the wins didn’t come.

The Browns snapped a 17-year playoff drought last season by going 11-5 and claiming a wild card spot. They won in Pittsburgh in the wild card round then lost at Kansas City in the divisional round.

They haven’t been to the playoffs in two straight years since 1986-89, and their last division crown was in 1989 in the AFC Central.

The Steelers (7-7-1) remained alive in the wild card chase, needing wins in their final two games and help elsewhere in the AFC. They will have extra incentive in trying to send out Roethlisberger with a home victory.

He said during the week that all signs point to this being his final regular-season home game after 18 years with the Steelers.

“The atmosphere is definitely going to be electric,” Browns defensive coordinator Joe Woods said. “That is just the nature of Pittsburgh and their fans.

“For us, the standard is the standard. Whether it is the first game of the year, a game with playoff implications, Ben possibly being his last (home) game, our job is to go out and play our defense to the best of our ability to give us an opportunity to win.”

Stefanski always preaches going 1-0 for the week, and for the first time in his two years that includes when the playoffs are out of the picture.

The focus for the Browns turns to trying to finish with a winning record and ruining Roethlisberger’s big night after he’s inflicted so much pain on them in his career. He’s 24-3-1 as a starter vs. the Browns, including 12-1 at Heinz Field, with the only loss coming in the playoffs last year.

“As far as quarterbacks, he is one of the greats,” Garrett said. “Just going back and forth with him has been fun over the years. I like the challenge of it going against a guy of his caliber and a guy of his prestige. I will just try to keep it cordial and send him off with a bang.

“I will miss his presence in the game, but as far as going against him and the rivalry against him versus us, no, I will not miss that.”

Defensive end Jadeveon Clowney was a fan of Roethlisberger’s before joining him in the league.

“It’s been a great career from my eyes, he won Super Bowls which everybody sets out to do, so he’s going to be in the Hall of Fame if you ask me,” Clowney said. “I just hope we send him out on the right way, our way. Win and get after him a lot.”