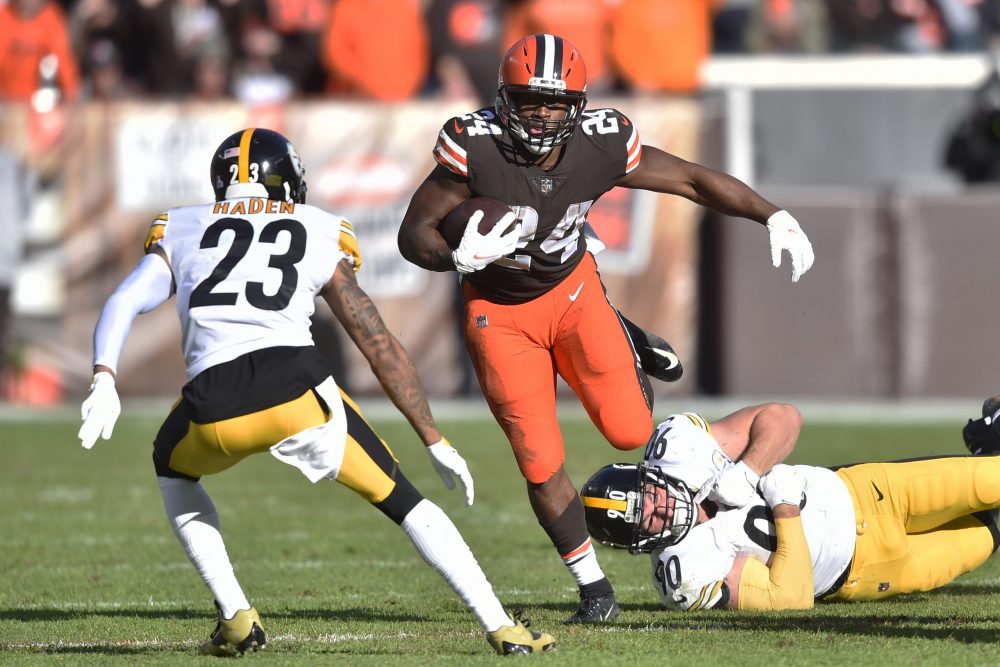 The Steelers defense traditionally has been great against the run, but that’s not the case this season. The Steelers are last in the league, allowing 142.7 rushing yards a game and 4.8 yards a carry.

This should set up perfectly for the run-heavy Browns, who rank third with 144.9 yards per game and 5.1 per carry. But the Browns have had issues rushing against the Steelers under coach Kevin Stefanski, including 96 yards on 23 attempts in a 15-10 loss Oct. 31.

“It was a hard front to run on for us in that last game,” Stefanski said. “I know we ended up having some yards towards the end, but it is a stout front. We have to make sure we are doing our job really along the front, on the perimeter, running back and you name it. You really have to be about your business because this is a physical group. They run multiple fronts. I know what the statistics say and I understand that, but I have a ton of respect for that defense and that run defense.”

Stefanski and coordinator Alex Van Pelt specifically mentioned defensive tackle Cam Heyward as a force, and outside linebackers T.J. Watt and Alex Highsmith can also wreak havoc. But the Steelers have been without big bodies Tyson Alualu and Stephon Tuitt across the 3-4 front.

“Our run game has been hit and miss for whatever reason against this crew,” Van Pelt said. “That is something that we have addressed, especially during our bye week, is having to run the ball better against this opponent.”

Nick Chubb will carry the load for the Browns as he looks to cap what’s already been a Pro Bowl season. He’s rushed for 1,143 yards, a 5.5 average and eight touchdowns. He had 126 yards last week in a loss to the Packers when the Browns totaled 219 on the ground.

Baker Mayfield’s career-high four interceptions against the Packers drove one of the final nails into the coffin of the Browns’ playoff hopes. While a bounce-back from the Packers disaster would’ve carried a lot more weight if it returned the Browns to the playoffs, how Mayfield responds remains important as significant questions loom about his future.

Just as it has been for the team, the season was a huge disappointment for Mayfield. He battled injuries since Week 2 and couldn’t build on his strong finish from a year ago. He’s been too inaccurate and inconsistent and hasn’t made enough explosive plays, ranking 27th with a 62.4 completion percentage, 24th with 2,825 yards and 15 touchdowns and 25th with an 86.1 passer rating. He said his confidence isn’t suffering from the struggles.

Van Pelt made it clear the rash of interceptions can’t happen again but didn’t want to dwell on the negative.

“There is that fine line,” he said. “You obviously address it after the game when you are making corrections and then you move on. That is how you have to think as a quarterback, too. How do I get better from it? Then I have to put it at the back of my mind and know how I am going to play better moving forward because of it.

“Shooters shoot. You have to keep shooting. His confidence will not waver at all. You have to trust his decision-making and not let that shake you up at all as a quarterback.”

Browns rookie James Hudson III will be in the spotlight in his true introduction to the Rust Belt rivalry. Hudson played only two special teams snaps in the first meeting but is expected to start at right tackle in the rematch. That means matching up nearly every snap with four-time Pro Bowl outside linebacker T.J. Watt.

“He is a great player,” Stefanski said. “He has our attention. We have to account for him in the run and the pass game.”

Stefanski declined to announce Hudson as the starter — Blake Hance is the other option — but he was the choice after All-Pro right tackle Jack Conklin was lost for the year Nov. 28 with a ruptured patellar tendon. Hudson started Dec. 12 against the Ravens then missed the last two games after testing positive for COVID-19. The roster shuffling that included left guard Joel Bitonio shifting to left tackle should stop with the return of Hudson, left tackle Jedrick Wills Jr. and center JC Tretter from the COVID list.

Watt has dominated this year with a league-high 17.5 sacks and four forced fumbles. He and Cleveland’s Myles Garrett, who has 15 sacks, are candidates for NFL Defensive Player of the Year, and the prime-time matchup provides another chance to impress the voters. The coaches will give Hudson help, but he must play well to keep Watt from wrecking the game.

Catches, receiving yards and receiving touchdowns for Jarvis Landry in 10 games. He’s on pace for career lows in each category, including per game.

Sacks for the Browns, who entered the week tied for 10th in the NFL.

The Browns are playing for pride after being eliminated from the playoff chase Sunday. I think that will be enough. Browns 24, Steelers 20.

Commentary: For years, Big Ben has been big trouble for Browns
Commentary: Browns turned season of hope into season of despair