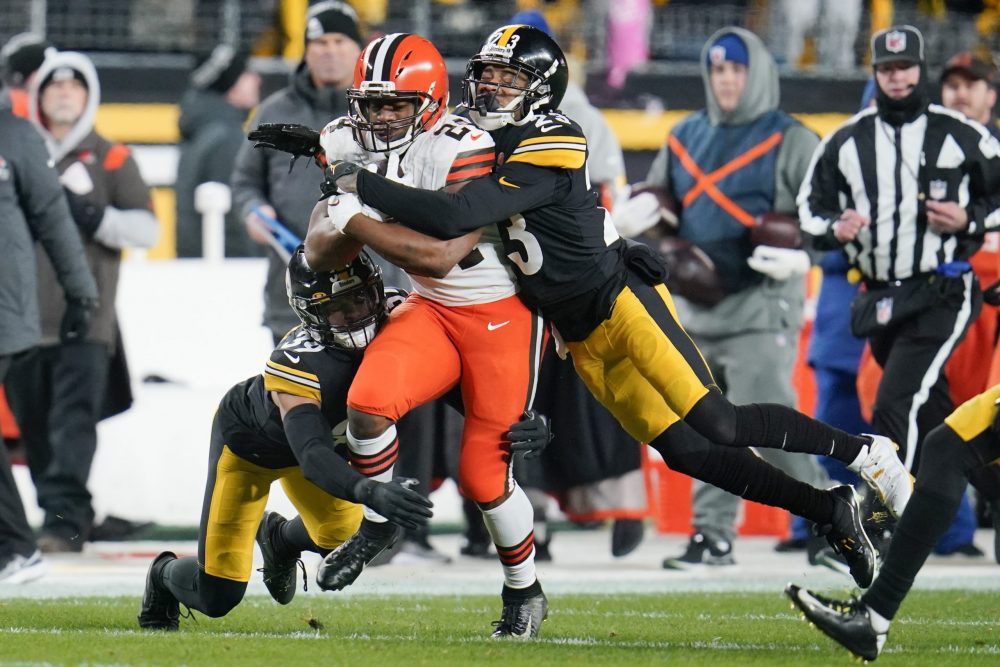 Famous quarterback brothers Peyton and Eli Manning had some praise for the Browns during their Manning Cast of Monday Night Football, but they also didn’t pull any punches.

Nick Chubb received the most praise from the brothers, as each — along former Steelers coach Bill Cowher, who joined the program for the first quarter — identified Chubb as the focal point of the Browns offense.

“Even last week against Green Bay, after two interceptions you can kind of tell it’s not going to be your day in the passing game,” Peyton said. “Stop calling the passes and just give it to this guy. Anytime you have two guards making the Pro Bowl, something tells me you ought to be throwing the ball.”

Peyton was quick to point out that the connection between Baker Mayfield and Jarvis Landry hasn’t been the same as it was last season. He liked that Cleveland involved him early as Mayfield found Landry on the Browns second offensive play for a 20-yard gain.

But the praise quickly faded in the first half as the Browns struggled to move the ball offensively.

Cleveland faced a third-and-10 on their opening drive that stalled after Austin Hooper dropped what would have been an easy completion for a good chunk of yards — possibly a first down. Peyton praised Mayfield for putting the ball in the perfect place for Hooper to take advantage of the open field, but the normally reliable tight end couldn’t haul it in.

“(Mayfield) put him in the right spot, (Hooper) couldn’t catch the ball though,” Eli said.

Both brothers and Cowher were glad to see Chubb more involved on the Browns’ second drive. The star running back finished with 35 yards on four carries in the first half, which Peyton said wasn’t nearly enough, even joking at one point that their broadcast needs a sideline reporter to confirm whether Chubb was injured after not seeing him carry the ball for a long spell.

“And honestly, (running Chubb) plays into Baker’s strength as well,” Cowher said. “He’s a play-action guy, not a drop back guy. He’s a guy who’s good on the move, give him the one read.”

Hooper went on to drop another pass and was flagged for a false start on a third-and-2 that ultimately caused the Browns to punt. Peyton quipped after the penalty that he “wouldn’t let Hooper back into the huddle for at least three more series” after that.

Mayfield finished the half with just four completions on 15 attempts, 58 yards and an interception. The Browns mounted only 108 total yards of offense. His interception came off of a play-action attempt in which he rolled out to the left, something Eli was not a fan of, while Peyton noted that Mayfield missed David Njoku.

“I didn’t tell them to boot him to the left,” Eli said, alluding to their earlier observation on Mayfield being strongest off play action. “Roll right, he’s right-handed and has a left shoulder problem. Don’t run everything to the left. And the receiver has to go flat right there. He’s drifting up and makes the ball underthrown, but not a great decision. He had the tight end right there.”

Commentary: Browns turned season of hope into season of despair
Commentary: Is Kevin Stefanski the real deal, or just the GQ version of Freddie Kitchens?