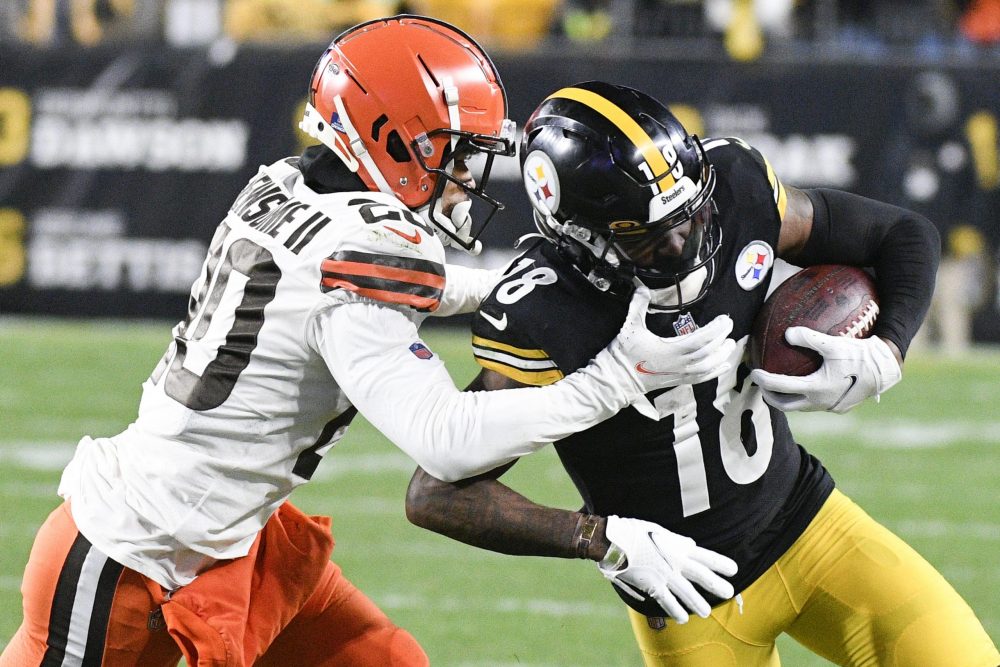 Cornerback Greg Newsome II’s successful rookie season has included establishing himself as a starter and showing the versatility to play in the slot. The only thing missing is an interception.

He has one last chance Sunday against the Bengals at FirstEnergy Stadium.

“It would be amazing to end the year with an interception or maybe a few interceptions, if I can,” Newsome, the No. 26 pick, said Thursday. “That would definitely be a good time if I could get one the last game.”

Alex Van Pelt says he’s comfortable not calling plays, proud of Baker Mayfield for learning how to play through injury


Newsome said he’s talked to cornerback Denzel Ward about the lack of interceptions and was told they will come. Newsome, who had only one pick in three years at Northwestern, isn’t leaving it to chance.

“That will come definitely just from film study and things like that,” he said. “Just catching footballs all of the time is huge just because at practice, DBs and the defense do not catch the football enough, so you have to be able to do it on your own, catch it in positions you normally would not be in and things like that just to prepare for the game. That is something I am definitely looking to improve upon going into next season.”

Newsome has started 10 of 11 games, collecting 31 solo tackles, three assists and nine passes defensed. His season was interrupted for three games last month after his head hit the ground on the final play of practice Dec. 10 and he suffered a concussion. As he was recovering he tested positive for COVID-19, missing a total of three games.

“That was super tough,” Newsome said. “Do I regret trying to go make a play on the football? No, because that is just how I play, whether it is practice or the game. I play like I practice and I practice like I play.

“I just have to kind of sit back, watch my team play and kind of reflect on my game so when I am able to go again that I was not going to miss a beat. I feel like I did a pretty good job with staying in tune with the game plan and staying ready so when it is my turn again, I would be ready to go.”

Commentary: Is Kevin Stefanski the real deal, or just the GQ version of Freddie Kitchens?

“A lot of it has to do with confidence,” Newsome said. “I think last game showed how comfortable I am getting out there on the field.”

“He is a guy who is going to be here for a long time and give us a lot of good play outside at corner and inside in the slot,” coordinator Joe Woods said.

DO THE RIGHT THING

Center JC Tretter had played more than 5,000 consecutive snaps after signing with the Browns in 2017 before missing the Packers game on Christmas after testing positive for COVID-19. Tretter, who’s president of the NFL Players Association, had minor symptoms and decided he should test.

“It is a long snap streak,” he said. “That game was probably the game I most did not want to miss, going back to Green Bay.

Tretter, who will turn 31 next month and has battled knee injuries, said he plans to play next season.

“I am not looking for average,” he said. “I am not satisfied with average. I hope that from here we continue to get better scheme, fundamentals, technique and personnel, and that will be the focus this offseason.”

Priefer said the kickoff coverage was outstanding, kick returns weren’t explosive, punting was inconsistent, punt return improved from last year and field goals were great at the start and inconsistent down the stretch.

“Do I hope we have more explosive returns next year? Of course. Do I hope we are more consistent at the punter and kicker positions? Of course,” Priefer said. “I like our guys. They play hard, and I think we have the right people here. We just have to keep building and getting better.”

He would like to add a big-time returner who can focus on the job, someone in the mold of Cordarrelle Patterson or Marcus Sherels from his time with the Vikings.

Defensive tackle Malik Jackson was placed on the COVID list and will most likely miss the finale.

He signed a one-year, $3.75 million deal as a free agent. He’s started all 16 games despite battling knee soreness and has 25 tackles, two tackles for loss, a half-sack, seven quarterback hits and four passes defensed.

Jordan Elliott is expected to start in his place.

Tretter is in his fifth season with the Browns after four years with the Packers. Chubb has earned a spot in rare company.

“I think the two teammates I hold in highest regard in my career are Jordy Nelson and Nick Chubb,” said Tretter, also referring to the former Packers receiver. “Both very similar guys of quiet, always did the right thing, always just worked hard and kept their mouth shut and was kind of the perfect example of what you should be doing.”

** Practice squad kicker Chris Blewitt was placed on the COVID-19 list. He, safeties Adrian Colbert and Nate Meadors and guard Hjalte Froholdt had been protected from being signed off the practice squad by another team this week.