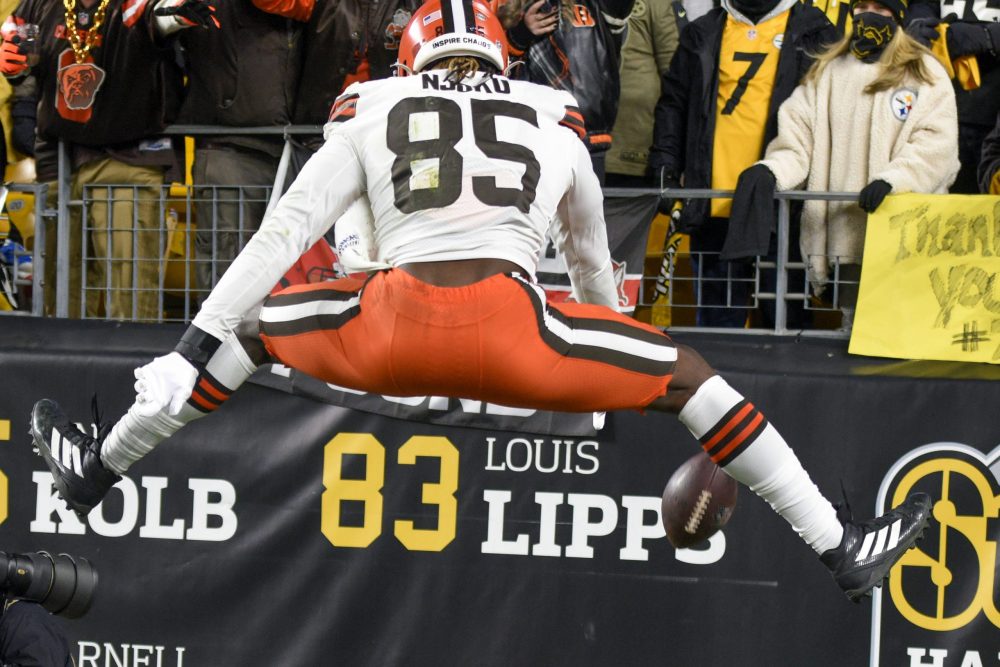 ’Tis the season for wondering if potential free agents will return.

The coaches certainly sound like they want and expect tight end David Njoku to be back. He’s scheduled to hit the free agent market in March.

“David is a guy over the course of the last couple of seasons who has shown great growth as a player and as a person,” coach Kevin Stefanski said Friday. “The way he is playing on the field and the things that we are asking him to do, I think he is doing a really nice job. I think the tape speaks for itself.

“He has grown as a professional. He is still a young man so he is continuing to grow as a person, as well. I am really pleased with where he is and I want him to finish strong.”


Myles Garrett working to keep Jadeveon Clowney in Cleveland: I want him here

Njoku didn’t practice Thursday and was limited Friday with a shoulder injury and was listed as questionable for the finale Sunday vs. the Bengals at FirstEnergy Stadium. He’s played 15 games — he missed the Dec. 12 win over the Ravens on the COVID-19 reserve list — with 11 starts as the Browns use a lot of multiple-tight end packages.

He has 34 catches on 51 targets for 464 yards, a 13.6 average and four touchdowns. The TDs lead the team, while the catches and yards rank third. He outjumped former Browns cornerback Joe Haden to catch a back-shoulder fade from Baker Mayfield for a touchdown Monday night in the 26-14 loss to the Steelers.

“I like David and the way he played this year,” coordinator Alex Van Pelt said. “He was productive for us and explosive in the pass game. He is very good at the point of attack in the run game. That is tough to find in tight ends.

“We are lucky to have three who can do both of those things. He did it at a high level. I was very proud of his season. He did some good things on both sides in the pass game and the run game. I definitely hope he is a part of us moving forward.”

Njoku is only 25 years old despite being the No. 29 pick in 2017. The Browns paid him $6.013 million this season after picking up the fifth-year option on his rookie contract.

After requesting a trade in 2020, he recommitted to the organization this season and said early in the year he wants to sign an extension.

The Browns signed starting tight end Austin Hooper to a four-year, $42 million deal as a free agent in 2020 but he’s been a disappointment, including 38 catches for 345 yards and three touchdowns in 15 games this season. The Browns would save $9.5 million in cash by cutting Hooper in the offseason but would have $11.25 million in dead money on the 2022 salary cap.

“He has had a very solid year for us,” Van Pelt said of Njoku.

With nothing on the line vs. the Bengals — the Browns have been eliminated from playoff contention and the Bengals clinched the AFC North — Stefanski and the organization must decide whom to play.

“We will kind of make those determinations as we get through the weekend, but I would expect if guys can play, they will play,” Stefanski said.

He was asked specifically about running back Nick Chubb, who was limited in practice this week after his ribs and chest were injured vs. the Steelers.

“Understanding all of the variables at play here, we talk about each one of our players and how we are going to utilize them,” Stefanski said. “I do think it is important, and Nick is an example of a guy who is pushing to play. All of the guys, they want to play, they want to go compete and they want to go win.”

Pro Bowl defensive end Myles Garrett is still struggling to accept the lack of a return to the playoffs after the season began with Super Bowl expectations.

“I’m not processing it well, but it’s there,” he said. “I mean, it’s going to be frustrating for about probably a week, maybe two. Then I’ll probably go somewhere nice and warm and tropical, and then I’ll come back and get my (butt) back to work because I don’t want to have that happen again.”

Earlier in the week Garrett became the first Browns player to win the Joe Thomas Award in consecutive seasons. It’s given to the team’s player of the year, as voted by the local chapter of the Pro Football Writers of America.

He was also co-winner of the Dino Lucarelli Good Guy Award with left guard Joel Bitonio.

“Hey, I’ll take that,” Garrett said. “I heard about the player of the year award, and I definitely appreciate it. I mean, I’m still sore about how the season has panned out, but I still appreciate the honor very much. I know we still have one left and got to prove y’all right.”

Receiver Jarvis Landry has talked to reporters only once since best friend Odell Beckham Jr. was released at midseason, and that was at a Thanksgiving charity event.

“He has been great,” Stefanski said. “He really has been the same guy who walks into the building each day, works hard, provides leadership, plays hard and all of the above. Certainly somebody who we value.”

In 11 games Landry has 46 catches for 495 yards and a touchdown — all career lows. He has two rushing touchdowns.

He hasn’t been 100 percent since returning from a knee injury that cost him four games early in the season. He’s set to make $15 million next season in the final year of his contract, so the team could elect to cut him or try to restructure the deal.