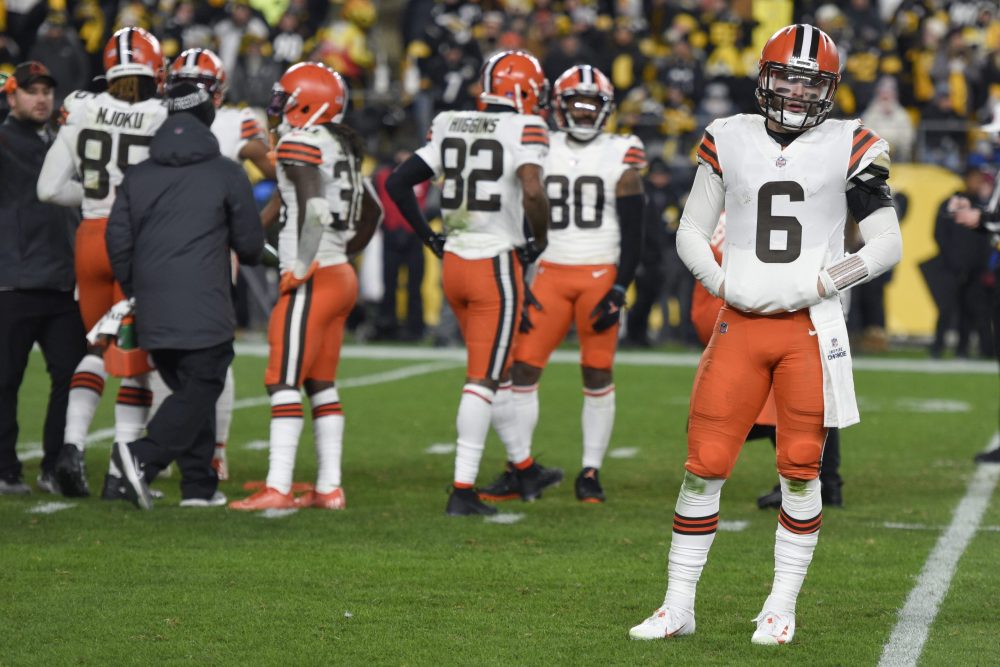 The finale at FirstEnergy Stadium was supposed to be a celebration. The last stop before a second straight playoff appearance.

Or, at worst, a chance to beat the Bengals and win the first AFC North title in Browns history.

But like too many things this season, the reality didn’t meet expectations. The Bengals (10-6) clinched the division title last week, and the Browns (7-9) were eliminated from playoff contention.

Here are five reasons the hope turned to despair.

The responsibility doesn’t fall solely on Mayfield, but quarterback is the most important position and he had the ball in his hands at the season’s most critical moments. He went 6-8 as the starter, completing 60.5 percent (28th in the NFL) for 3,010 yards (22nd), 17 touchdowns (20th), 13 interceptions (ninth most) and an 83.1 passer rating (27th).

The injuries can’t be ignored, particularly the torn labrum in the left, non-throwing shoulder that required him to wear a restrictive and protective harness. His throwing motion and accuracy were affected, especially on throws to his left.

But that shouldn’t be used as an excuse. He wanted to keep playing and the coaches kept playing him, so his job was to overcome the issues. He didn’t.

The lack of execution leaves his future with the Browns in question.

MAN WITH THE PLAN

Stefanski couldn’t find the best balance between relying on the run and attacking with the pass. His preferred three-tight end sets didn’t give the offense the desired advantage, and the successful bootlegs of Mayfield were few and far between.

The Browns couldn’t make it work with receiver Odell Beckham Jr., which sent the season in the wrong direction.

Beckham had wanted out for a while, but the frustration came to a head after the loss to the Steelers on Oct. 31 when he caught one pass on one target for 6 yards. His father shared a video on social media showing Beckham repeatedly running open and celebrated the criticism of Mayfield.

The Browns quickly decided to part ways and released Beckham the next week. He signed with the Rams and has 25 catches for 287 yards and five touchdowns, after 17 catches and no touchdowns with the Browns.

Beckham didn’t want to be in Cleveland, dropped a couple of critical passes and wasn’t a disciplined route runner. But he remains tremendously talented, so Stefanski and Mayfield share responsibility for not involving him more and taking advantage of his skill set.

Beckham’s success in the red zone with the Rams made this painfully obvious.

Without Beckham’s playmaking and downfield abilities, the Browns receiving corps doesn’t scare defenses and will need an upgrade in the offseason.

Beckham’s departure also divided the locker room, with many players openly supporting him after his family’s attack on Mayfield. The team came together that week for a 41-16 win in Cincinnati but didn’t sustain the momentum. The Browns haven’t scored more than 24 points since and only reached 20 twice.

Adversity is a part of every NFL season, and the Browns dealt with plenty in the form of key injuries and COVID absences.

The dozens of COVID absences in December added to the misery. The Browns were short-handed against the Raiders and Packers, losing each game by two points with the playoffs on the line.

CLOSE BUT NO CIGAR

The Browns are 3-6 in games decided by six points or fewer. If they flipped that record, they’d be playing for the AFC North title Sunday.

The aforementioned problems played roles in the near misses, as did so many others.

They also didn’t create any game-changing plays on special teams. There were no huge returns, blocked punts or fake field goals.

Turnovers are the other equalizer with the power to flip a game and a season. The Browns have a minus-1 turnover margin and generated only 18 takeaways — 13 interceptions and five fumble recoveries.

A slightly better performance in one of these categories could’ve stopped the letdown in its tracks.