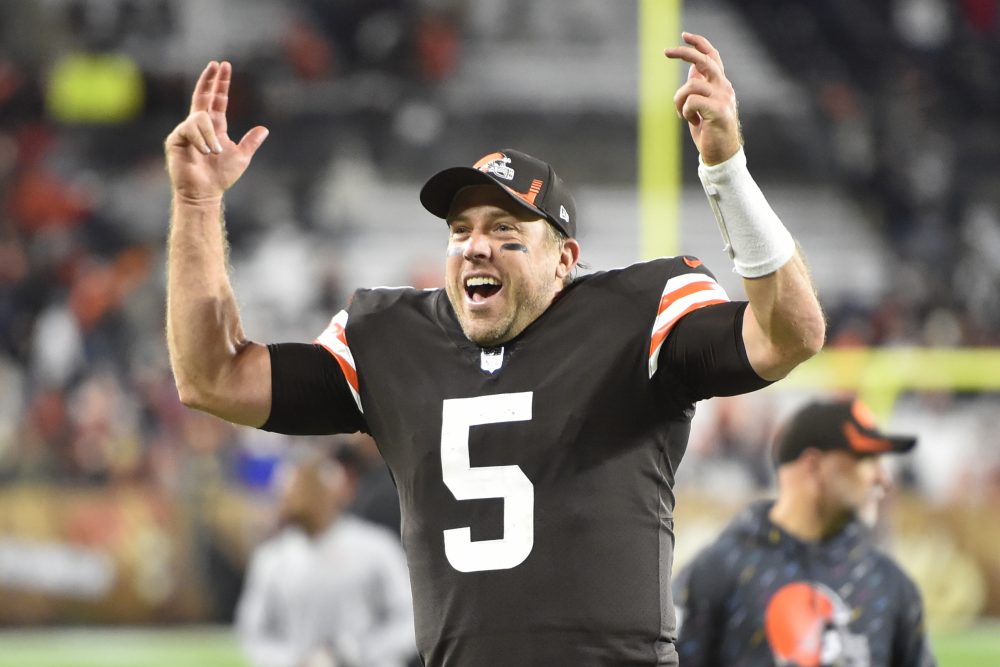 Quarterback Case Keenum might care more than anyone about the “meaningless” finale. He grew irritated during an interview this week when many of the questions were about Baker Mayfield and the team’s disappointing season. His focus was squarely on the Bengals and his second start of the season.


“It’s a dream come true to be able to go out there and represent not only the name on the back of our jersey, our families, but the name on our front and there’s a lot of pride,” Keenum said.

Other players said the right things about being professionals, playing hard and trying to end the season with a win, but Keenum’s enthusiasm was on a different level and seemed genuine. He’s going to be 34 years old next month and hadn’t started a game since 2019 until replacing Mayfield for the 17-14 win over the Broncos on Oct. 21. He went 21-for-33 for 199 yards, a touchdown, a sack and a 90.3 passer rating. Keenum was in line to start again vs. the Raiders in December but tested positive for COVID-19. He doesn’t take any opportunity to play for granted, and might also be auditioning for his next team. The Browns may not want to pay $6 million for a backup again next season.

“He is a pro,” coach Kevin Stefanski said. “He is ready for the opportunity. He very badly obviously wants to get a win like the rest of our guys do.”

The Browns, 7-9 and eliminated from the playoffs, could do without the 17th regular-season game added this season. It should be welcomed by rookie fourth-round right tackle James Hudson III. He was dominated Monday night in the loss to the Steelers, mostly by All-Pro outside linebacker T.J. Watt, and gets the chance vs. the Bengals to rebound and head into the offseason on a brighter note.

Hudson has started three games. He was bad in the first, better in the second and exposed in the third. He won’t be expected to start next year but ideally would serve as the swing tackle. He’ll have to be much improved.

Left tackle Jedrick Wills Jr. hasn’t had a disaster like Hudson’s in prime time, but Year 2 wasn’t what he or the Browns hoped. An ankle injury sidelined and slowed him for the first half of the season, then he was inconsistent in the second half. Pro Football Focus has him graded 62nd among tackles.

“It probably was not the year he wanted to have, but I know he got better,” coordinator Alex Van Pelt said of Wills. “Hopefully, knock on wood, next year we can come back healthy, stay healthy and be very productive at that left tackle spot because he definitely has the ability to do it.”

The tackles could get a break vs. the Bengals. Defensive end Sam Hubbard (thigh) is questionable, and Trey Hendrickson, who has 14 sacks, could rest. Regardless of whom they’re blocking, Hudson and Wills would benefit from a strong finish.

Many key players could be playing (or watching) their final games with the Browns. Decisions might not be made for months — the league year starts March 16 — but the list of candidates is known.

Receiver Jarvis Landry missed games with an injury for the first time in his eight-year career, posted career lows in catches, yards and touchdowns and is due $15 million in the final year of his contract in 2022. And he wasn’t happy with the departure of best friend Odell Beckham Jr. and the inability of Mayfield to get him the ball. He’s the heart and soul of the team, but financial practicality may take precedent.

Defensive end Jadeveon Clowney, defensive tackle Malik Jackson and linebackers Anthony Walker Jr. and Malcolm Smith played on one-year contracts. Each had a significant role as the defense improved throughout the season, but none is certain to return. Safety/nickelback M.J. Stewart Jr. is also scheduled to be a free agent and proved his value filling in over the last few weeks.

On offense, tight end David Njoku and receiver Rashard Higgins are set to hit the market. The team wants to keep Njoku, while Higgins’ six-year run seems ready to expire after not having much of a role. Running back D’Ernest Johnson will be a restricted free agent, and the Browns likely won’t be able to keep him after he played so well — 411 rushing yards, 5.5 a carry, two touchdowns — filling in for Nick Chubb and Kareem Hunt.

Games won by the Browns in the last seven meetings with the Bengals. Prior to that, the Bengals had won seven straight.

Points per game allowed by the Browns and the Bengals this season, tied for 17th in the NFL.

The Bengals are expected to rest many of their best players before the playoffs, while the Browns look to finish a sour season on a positive note and go 6-3 at home. Browns 20, Bengals 14.