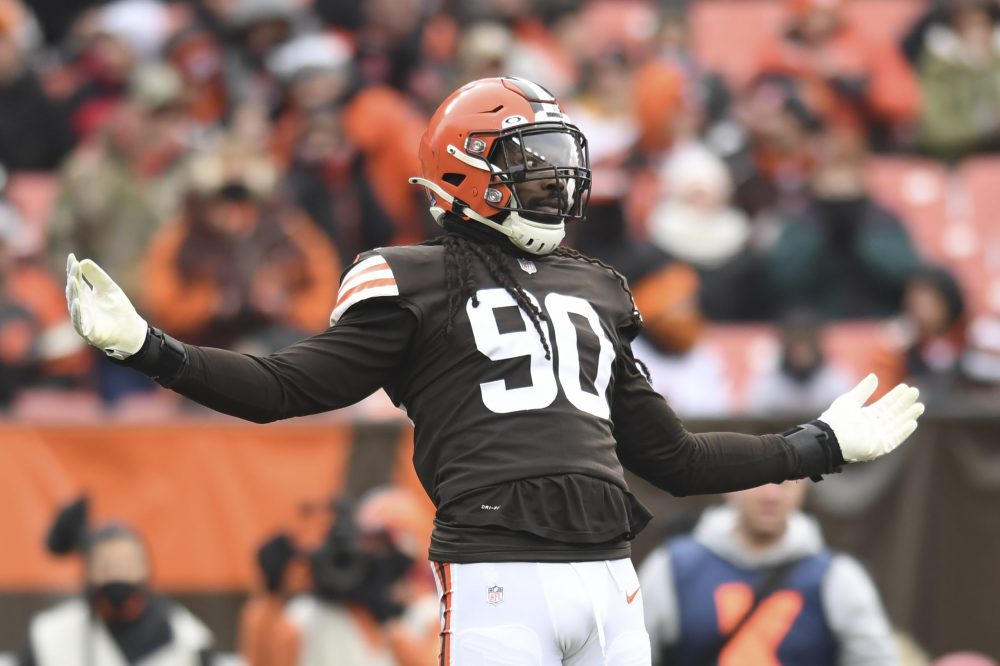 CLEVELAND — Jadeveon Clowney hasn’t felt this good on a football field in a long time, and he wasn’t going to take for granted another opportunity to suit up and make the most of the Browns’ season finale against the Bengals on Sunday — especially in a contract year.

Clowney sacked the Brandon Allen twice in Cleveland’s 21-16 win, bringing his season total to nine — the most since a career-high 9.5 sacks with the Texans in 2017.

The sacks came with a big payout, too.

Clowney’s one-year, $8 million contract included incentives which allowed for up to an extra $750,000 if the defensive end recorded nine sacks, according to Spotrac.

In a professional career that’s been plagued with injuries, it’s been a welcome change for him to complete a season with minimal time off the field. He missed three games — one due to knee pain and two with COVID-19 — but said after the finale his body feels “better than it has the past few seasons.”

“I’m taking care of (my body) a lot better the older I get,” Clowney said. “I guess I pay more attention to it (and) listen to my body than I have in the past.

“I’ve been smiling from ear to ear. I told (the team) I’m happy to get through this year (with) nothing wrong with me — played well, had a great season. I wish I could’ve played all the games without COVID but it’s been a great year for me. I’m just happy to be in this place right now.”

The resurgence could not have come at a better time for Clowney, who has made considerable impact with the Browns. His contract is up after this season and it was important for him to show his team and the league he’s still able to compete at a high level despite the risk that comes with sustaining multiple injuries — most notably a torn meniscus in his rookie season in 2014 that required microfracture surgery.

For once, however, he said he’s going into an offseason “ahead of the curve.”

“I had a couple years I’ve been hurt but I always thought I’ve been playing well, I’ve just been injured,” Clowney said. “I just wanted to make it through a year healthy and show people that I can play at a high level (and) stay healthy. That was my goal this year was to really be in a healthier place than I have been the last few years. I think I reached that.”

Browns coach Kevin Stefanski also credited the productivity this year to Clowney’s ability to stay mostly healthy. There was no doubt about what he could bring to a team, but he often hasn’t been able to showcase his talent to its full potential.

Now he’s established himself as a valued part of the defense, someone Stefanski says plays the game with “reckless abandon.” But the question is whether the Browns can or will re-sign Clowney to a new contract.

His teammates have voiced their support, including Myles Garrett, who last week said flat out: “I want him here.”

“The guy’s hitting his stride and he has a lot of football left and he doesn’t know that,” Garrett added.

The two have joked about this being Clowney’s last year, but deep down the three-time Pro Bowler said he has a love for the game and a lot left in the tank. He’s putting up career numbers, making smarter choices when it comes to his health and has the same competitiveness as when he first got to the NFL.

“I was loving it when I was hurt, that’s the funny part,” Clowney said. “I’m out there playing hurt, that’s how much love I had. I just like to be on the field. I just like the way I feel. … Once you’re healthy, I think I can play as many years as I want just staying healthy.

“I know I can play in this league,” he added. “Just being healthy has always been my problem. So I want to get there, stay there and try to play at a high level.”