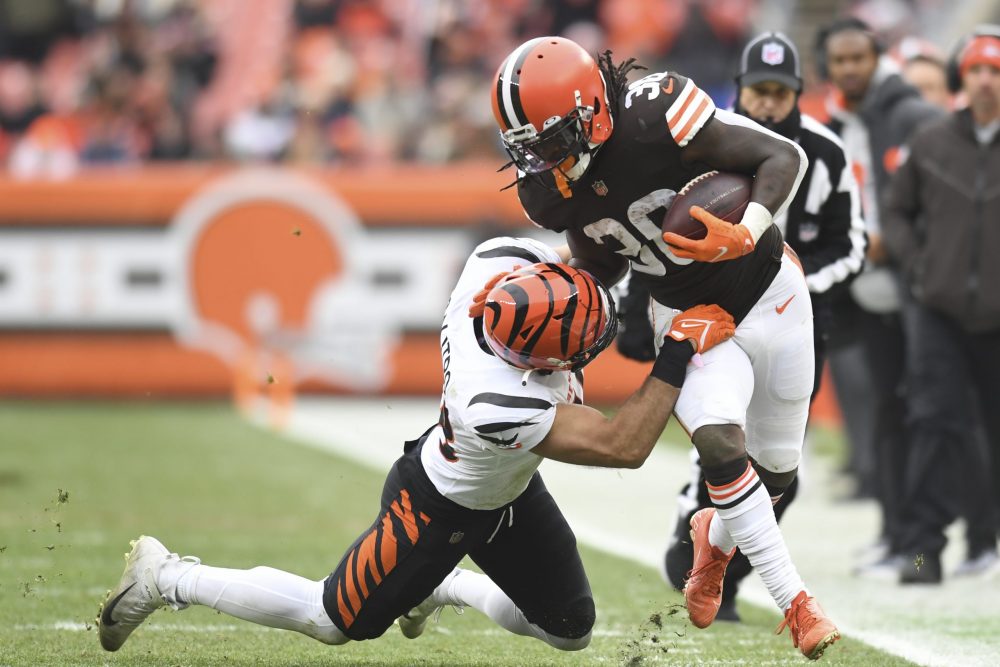 CLEVELAND — Running back D’Ernest Johnson made a name for himself this season.

He earned a healthy pay raise, as well.

Johnson, who had an $850,000 salary this season, had never started a game before 2021 and had rushed only 37 times in two seasons after being undrafted and fighting for a spot in the league. He started two games this season and rushed for 100 yards twice, including 123 and a touchdown Sunday in the 21-16 win over the Bengals. He carried 100 times on the season for 534 yards and three touchdowns.


Johnson’s scheduled to become a restricted free agent in March, and the Browns have Nick Chubb and Kareem Hunt under contract to return in the backfield.

“Right now, I am just enjoying the moment and all of my teammates,” Johnson said. “After this, I am going to hang out with my teammates and I will let my agent take care of all the other stuff.”

Johnson’s 25-carry performance Sunday was more impressive considering he didn’t practice during the week after being placed on the COVID-19 reserve list. He was activated Saturday and cleared protocols Sunday.

“It was tough because I wanted to go out there and spend this last week with the guys at practice,” Johnson said. “I was at home watching film, studying and doing little things on the side just to get me ready and prepare for today. We just went out there and got a W.”

#Browns D’Ernest Johnson on rushing for 123 after spending week on COVID list. pic.twitter.com/87TOduB7CG

Coach Kevin Stefanski said he wasn’t ready to talk about whether the Browns could afford to keep Johnson. They could choose to cut Hunt without a hit on the salary cap and keep Johnson.

“I would just tell you that D’Ernest comes in off the couch and performs because that is what he does,” Stefanski said. “He did a really nice job fighting for extra yards. I am not surprised. Just a very, very dependable player.”

Johnson was clutch this season filling in for Chubb and especially Hunt, who missed nine games. Chubb started Sunday, then Stefanski turned to Johnson, until Johnson tired at one point in the third quarter. Chubb re-entered and ripped off a 35-yard run.

“I have probably run out of superlatives for that young man,” Stefanski said of Chubb. “He is a team guy all of the way. He will do whatever is asked of him because he wants to help the team win.”

Chubb finished the season second in the NFL with 1,259 rushing yards after 58 Sunday. He’s the only player in the league with at least 950 yards in each of the past four seasons.

After his breather, Johnson returned and eventually rushed nine straight times to set up the final touchdown.

“First of all, I am well-rested and my body felt good,” he said. “Every opportunity I try to take advantage of it, and that is what I did at the end of the day.”

The Browns finished third in the league in rushing with 145.3 yards a game.

If this was receiver Jarvis Landry’s final game with the Browns, he went out on a high note.

He led the team with six catches for 75 yards and caught his second touchdown of the season, a 26-yarder in the first quarter.

“To get a chance to get out there and have some big plays to him, including the touchdown and the third down, when he is rolling, he is rolling. I am very thankful and honored to be one of the guys who has gotten to throw him a touchdown.”

Landry, 29, is under contract for $15 million next season in the final year of his deal, and the Browns may choose to cut him and save the money and salary cap space.

Rookie linebacker Jeremiah Owusu-Koramoah left in the third quarter with a shin injury, went to the locker room and didn’t return.

“We will see what happens over the next 24 hours, but nothing really of note,” Stefanski said.

** Receiver Rashard Higgins was active but didn’t play due to an illness. The team announced in the third quarter he wouldn’t play.

** Defensive tackle Jordan Elliott exited with a knee injury in the fourth quarter and will have an MRI on Monday.

** Bengals safety Ricardo Allen left the game with a concussion after a helmet-to-helmet hit on Landry.

The Browns finished in third place in the AFC North after their win and the Ravens’ loss to the Steelers.

Cleveland’s 2022 opponents are set. In addition to the six division games, the Browns will play the AFC East and NFC South.

The Browns paid tribute to Pro Football Hall of Famers Marion Motley and Bill Willis with a video shown during the game to amplify the league’s commitment to Inspire Change social justice efforts.

Motley, a fullback, and Willis, a lineman, were signed in 1946 and helped break the color barrier and reintegrate professional football.

Willis’ two sons and Motley’s grandson led the crowd in a “Here we go, Brownies” chant.

Hunt was inactive, bringing a premature close to an injury-plagued season.

Hunt missed his fourth straight game with an ankle injury. He missed five earlier in the season with a calf injury — the first time in his five-year career he was sidelined by injury.

Harrison, who’s set to become a free agent in March, missed his fifth straight game. He started 11 of 12 games, totaling an interception, three passes defensed, a sack, 58 tackles and four tackles for loss.

The Browns swept the Bengals in back-to-back seasons for the first time since 1993-94.

** Punter Kevin Huber played his 207th game with the Bengals, tying former cornerback Ken Riley for most in franchise history.