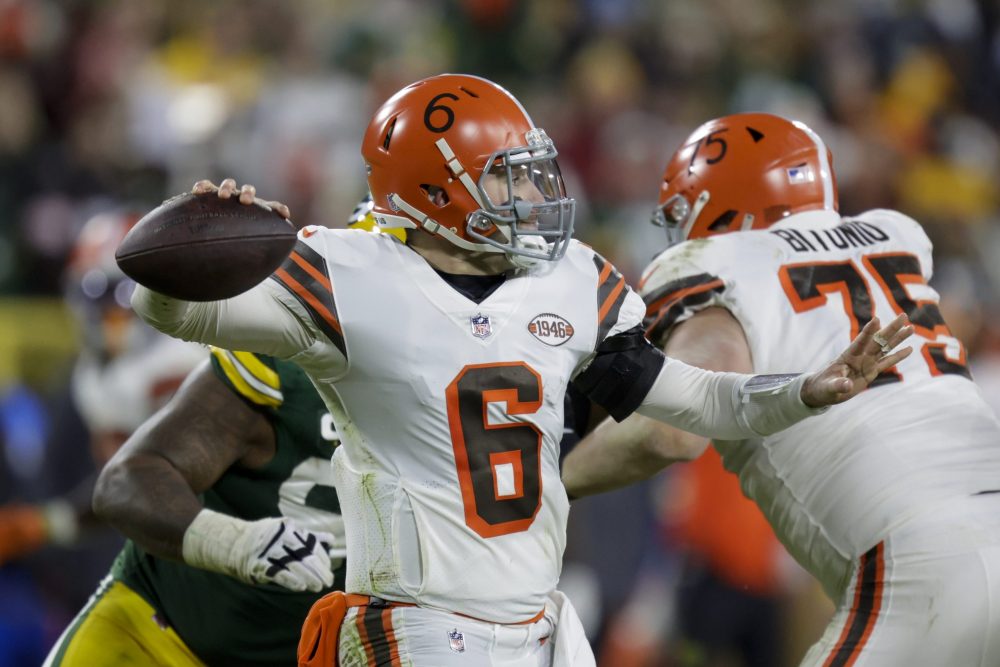 Quarterback Baker Mayfield is keeping his spot atop the depth chart.

The Browns entered the long offseason by voicing a commitment to Mayfield for 2022, and general manager Andrew Berry had the strongest comment.

“We fully expect Baker to be our starter and to bounce back,” Berry said Tuesday on Zoom during a season wrapup news conference. “We’re looking forward to Baker obviously getting healthy in the offseason and then putting good work through the spring and with his coaches for having the type of season that we know he can have moving forward.”


Browns reflect on not living up to talent and hype, not rising to occasion in critical moments and heading into 2022 with unfinished business

Mayfield regressed in 2021, as the Browns went 8-9 and didn’t qualify for the playoffs after opening the year with Super Bowl expectations.

He went 0-for-5 with the chance to lead a late go-ahead drive and completed 60.5 percent (27th in the NFL) with 215 yards a game (22nd), 17 touchdowns (22nd), 13 interceptions (3.1 interception percentage was fourth worst), 43 sacks (fourth) and an 83.1 passer rating (27th). The labrum in his left, non-throwing shoulder tore in Week 2, he continued to play while wearing a restrictive harness and will have surgery Jan. 19 in Los Angeles.

As coach Kevin Stefanski did Monday, Berry expressed confidence Mayfield will rebound. He pointed to Mayfield’s successful 2020, when the Browns went 11-5 and won a playoff game.

“It’s easy to forget at this point of the year what we’ve seen with Baker over the past several years,” Berry said. “Obviously he had his most productive season in this offense under Kevin just really as early as last year.

“Look, I think we’ve been with Baker for a long period of time and we know his work ethic, we know his drive, we’ve seen him as a talented passer in this league and we’re looking forward to him getting healthy and continue to make improvements and we expect him to bounce back next year.”

Proclamations made in the days following the season don’t necessarily survive the offseason, and a lot can change before the players return to team headquarters in the spring. Mayfield’s poor season can’t be denied, and the struggles can’t all be pinned on the shoulder injury.

The Browns haven’t made a long-term contractual commitment to Mayfield, and Berry said he’ll always seek upgrades at all positions.

“My job is to assemble the best team possible and make sure that we’re in the position to compete consistently for the division, to be in the playoffs and ultimately win a championship,” he said. “That’s something that we’ll strive to do every year.

“We don’t say we’re just going to target certain positions. We scout and look at player availability as if we have an expansion team. So the way we go about adding competition or improving the talent base in the roster is largely independent of who’s currently on the team.”

If Mayfield returns as the starter as expected, he’ll do it with uncertainty about the future. He’s guaranteed $18.86 million in 2022, the last year of his five-year rookie contract. The Browns haven’t discussed a new deal with Mayfield’s agent, and Berry said he’s comfortable with Mayfield playing without an extension.

“That’s not something that really goes into the calculus for us,” Berry said. “Every year you will have guys that are on expiring deals.

“The reality of it is any of us who work in the NFL, every year’s a prove-it year.”

Mayfield’s situation is a rare one. Since fifth-year options for first-round picks were included in the 2011 collective bargaining agreement, no quarterback has played on the option then received an extension after the fifth season.

Several quarterbacks were given extensions before the fifth season, but Tampa Bay’s Jameis Winston and Tennessee’s Marcus Mariota — the Nos. 1 and 2 picks in 2015 — were the only ones to play their fifth seasons on the option. Winston started every game and Mariota was benched after six games, and both became free agents after the season and signed elsewhere.

If Mayfield were to play well next season, the Browns could try to sign him to an extension or keep him for 2023 by using the franchise tag.

He had his exit meeting with Stefanski on Friday after the decision was made to sit him for the finale. Mayfield had publicly criticized Stefanski’s play calling twice in the final month of the season, but they parted on a positive note and planned to work out any issues.

“I don’t have any concerns in terms of relationship or anything along those lines,” Berry said. “I think it’s pretty natural to have discussions around scheme as you go into any offseason. Those discussions have happened and will continue to happen with the appropriate parties.”

“I have seen Baker play at a very high level,” he said. “I am confident he will get this surgery and he is going to work real hard this offseason to bounce back.”

Berry reiterated the organization was comfortable with the decision to keep playing Mayfield despite the injury — he only missed one game because of it until the finale — because he was cleared medically and functioned well at practice.

“Baker was our starting quarterback,” Berry said. “He was going to play if he was ready to go. I do not think it is any more complicated than that.”

Berry’s previous interview with reporters was during the bye when the Browns were 6-6, had five games left and needed a strong finish to make the playoffs. He said they expected Mayfield to play “his best stretch of the year” after the bye.

It didn’t happen. Mayfield threw two touchdowns and completed 68.8 percent in a 24-22 win over the Ravens, missed the Raiders game on the COVID-19 reserve list, returned on Christmas and threw four interceptions in a 24-22 loss at Green Bay and completed 42.1 percent, threw two interceptions and was sacked nine times in a 26-14 loss at Pittsburgh.

“In fairness, misses two games, plays one game well, one game probably not so well and then probably the third game that he played, gets COVID, out two weeks, gets there the day of the game,” Berry said. “Certainly those five games didn’t go the way we hoped or anticipated, but we expect him to bounce back.”

He sees qualities that make him believe in Mayfield.

“He’s team-oriented, he’s a competitor, he’s super tough and he truly wants what’s best for the team and really to take the steps he needs to improve to become the quarterback that we know that he can become,” Berry said. “Guys that are self-motivated, they’re team-oriented and they’re tough, you certainly like that profile across any position.”

Browns reflect on not living up to talent and hype, not rising to occasion in critical moments and heading into 2022 with unfinished business
Kevin Stefanski says on 92.3 The Fan he and Baker Mayfield work well together, respect each other