Kevin Stefanski says on 92.3 The Fan he and Baker Mayfield work well together, respect each other 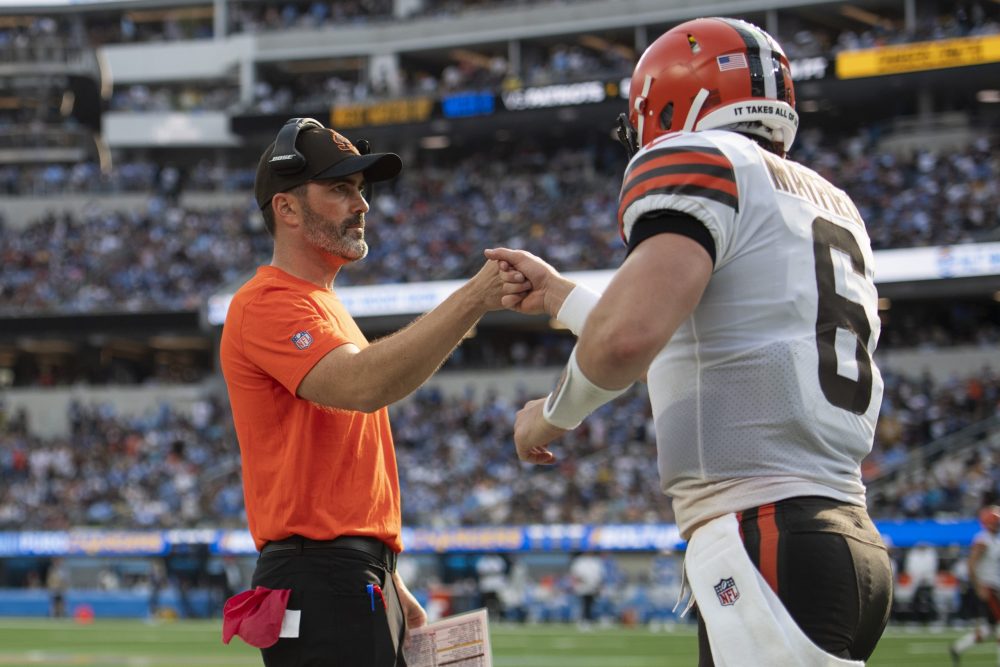 As the Browns proceed with the expectation that Baker Mayfield will be the starter again in 2022, coach Kevin Stefanski reiterated Thursday his relationship with his quarterback is solid.

“It’s good,” he said on 92.3 The Fan with Andy Baskin and Jeff Phelps. “We talked. He’s going to get surgery, which is huge for him, and he can start the rehab process here and get ready to jump back into it.

“But Baker and I, I think we work well together. I respect him. He respects me. I push him. He understands how we operate. We’ve had two years together, and I think as a team we’ve certainly just had our ups and downs. But I do think that we push each other, and there’s definitely a level of respect there.”


Tensions and frustrations grew for Mayfield during a difficult and disappointing season, and he publicly criticized Stefanski’s play calling twice over the final month. He said the calls got too conservative during the second half of the 24-22 win over the Ravens and rookie right tackle James Hudson wasn’t given enough help in pass protection during the 26-14 loss to the Steelers in which Mayfield was sacked nine times, including four by T.J. Watt.

Stefanski was more willing to discuss the relationship Thursday than when asked last Friday how it had changed since 2020.

“I would say it’s no different,” he said. “A good relationship.”

During the radio interview, Stefanski stressed the importance of the coaches and quarterback working together on the game plan.

“I do think it’s important for Sundays that everybody’s on the same page,” he said. “It’s important that the quarterback has a comfort level in what you’re doing. So that’s always going to be true for us, making sure that Baker and the quarterbacks feel confident in the plan.”

“I don’t have any concerns in terms of relationship or anything along those lines,” Berry said. “I think it’s pretty natural to have discussions around scheme as you go into any offseason. Those discussions have happened and will continue to happen with the appropriate parties.”

Mayfield struggled for much of the season and played through a torn labrum in his left, non-throwing shoulder suffered Week 2. He’s scheduled to have surgery Wednesday in Los Angeles.

He was shut down for the final game and met Friday with Stefanski in a standard exit interview. Stefanski described the meeting as positive and a person familiar with the situation told The Chronicle they plan to work out the issues.

The table is set for Mayfield to return in 2022, when he’s guaranteed $18.86 million in the final season of his five-year rookie contract.

“We fully expect Baker to be our starter and to bounce back,” Berry said. “We’re looking forward to Baker obviously getting healthy in the offseason and then putting good work through the spring and with his coaches for having the type of season that we know he can have moving forward.”

Mayfield regressed in 2021, as the Browns went 8-9 and didn’t qualify for the playoffs after beginning the year with Super Bowl expectations.

The labrum tore in Week 2 and a bone fractured in the left shoulder Week 6, prompting Mayfield to switch to a larger, more restrictive harness.

“It’s easy to forget at this point of the year what we’ve seen with Baker over the past several years,” Berry said. “Obviously he had his most productive season in this offense under Kevin just really as early as last year.

“Look, I think we’ve been with Baker for a long period of time and we know his work ethic, we know his drive, we’ve seen him as a talented passer in this league and we’re looking forward to him getting healthy and continue to make improvements and we expect him to bounce back next year.”