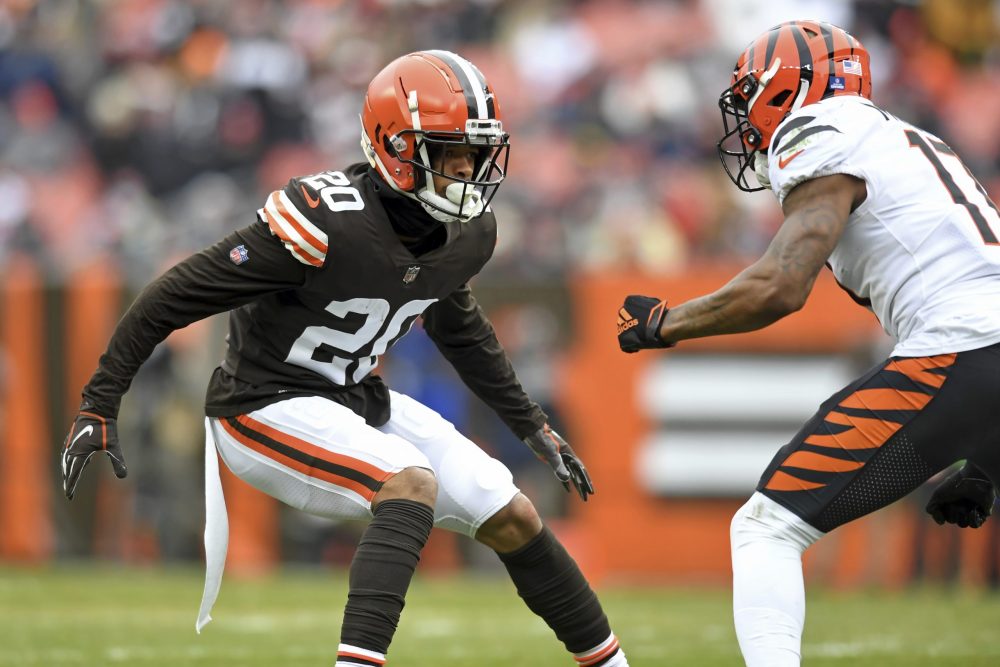 Cornerback Greg Newsome II and linebacker Jeremiah Owusu-Koramoah were the Browns’ first two picks in April and acquitted themselves well despite missing time with injuries.

Newsome solidified himself as a starter who can line up outside and in the slot and played well against quality receivers. Owusu-Koramoah was an immediate playmaker and developed into an every-down linebacker.

Both are committed to improving in Year 2 — on the field and in the locker room.

“That next step for me honestly is trying to become more of a leader,” Newsome said Monday. “I’ve had those qualities this whole time, but you can’t become a leader until you show guys how you lead yourself, how you attack every single day.

“And I think I’ve proven to my teammates that I’m going to come in every day and work. So I think that’s my next step now is just to become more of a vocal leader. When I see things that aren’t right, speak out and get my teammates in line sometimes if they need to be.”

“I’m always looking to be that role,” Owusu-Koramoah said. “But it’s just the development piece in terms of actually putting the action together to do that, and that’s something that I need to work on in terms of not continuously in that kind of rookie mindset. But more so moving towards one that is warrior. I’m looking forward to definitely stepping into that kind of role and being that guy for the team and being that guy for the linebacker group, as well.”

But Owusu-Koramoah said he stayed quiet because he was a rookie.

“Well, yeah, if I’m being honest, yeah,” he said. “It’s also just knowing there’s a time and place for everything.”

He said it’s not proper to rebuke a veteran or leader in front of others.

Two Browns front office members are in the mix to be general managers in the NFC North.

The Vikings also expressed their interest in Cook and Adofo-Mensah, requesting interviews Wednesday, according to multiple reports.

General manager Andrew Berry said Tuesday how excited he was for them to get opportunities to be considered for GM jobs.

Safety John Johnson III was the No. 1 target of Berry in free agency last year. The Browns signed him to a three-year, $33.75 million contract and expected him to help transform the defense.

Johnson started 15 games — he missed Weeks 16 and 17 with a hamstring injury — totaling three interceptions, five passes defensed, a forced fumble, a half-sack and 61 tackles. He called his performance “up and down” as he adjusted to playing mostly in the deep middle of the field.

“I would say I did all right,” he said. “Some plays I wish I had back. Some games I wish I had back. I think I had a different mentality coming into this year. I was kind of like play it safe instead of just letting it loose, so I think next year I’ll probably just turn everything loose and just let it all hang out and have fun with it.

“I think it was a good start for the first year and I think next year it will really take off.”

A series of injuries at tackle forced rookie fourth-round pick James Hudson III into action sooner than anticipated. The resulting struggles were obvious, especially Jan. 3 in the Monday night loss in Pittsburgh, when he was dominated by edge rusher T.J. Watt as Baker Mayfield was sacked nine times.

“James really got baptism by fire this year,” Berry said Tuesday. “I actually think he came along nicely and particularly ended his season in a really strong manner in the Cincinnati game.

All-Pro right tackle Jack Conklin is expected to return from a torn patellar tendon in time for next season. That would leave Hudson to compete to be the swing tackle.

Despite missing time in training camp with injuries, Schwartz caught three passes for 69 yards and rushed once for 17 in the opener. He managed only seven catches and five carries the rest of the season.

The speedster played 14 games — he missed three with a concussion suffered Nov. 14 returning a kickoff against the Patriots — totaling 10 catches for 135 yards and a touchdown and six rushes for 39 yards. He averaged 21.5 yards on 15 kickoffs.

“Probably the best thing for him is he battled a lot of adversity this year,” Berry said. “He had the injury in camp, came back, fought his way into kind of a part-time role, had a concussion middle of the year that obviously kept him out for several weeks and really battled his way back to get some meaningful reps at the end.”

The story of the plodding offense must include dynamic running back Kareem Hunt missing more than half the season with injuries.

Not only does he spell Nick Chubb, he’s the primary back in third-down and two-minute situations. But Hunt missed five games with a calf injury, returned for two and missed the final four with an ankle injury. In eight games he rushed for 386 yards, a 4.9 average and five touchdowns, adding 22 catches for 174 yards.

“It was hard. Kareem’s a great player for this team, he brings intensity, brings a lot of energy, he makes big plays,” Chubb said. “When he was healthy, he was making big plays for the team and he gave us a lot of momentum. To not have that in the offense, it was big. That was definitely a hit for us.”