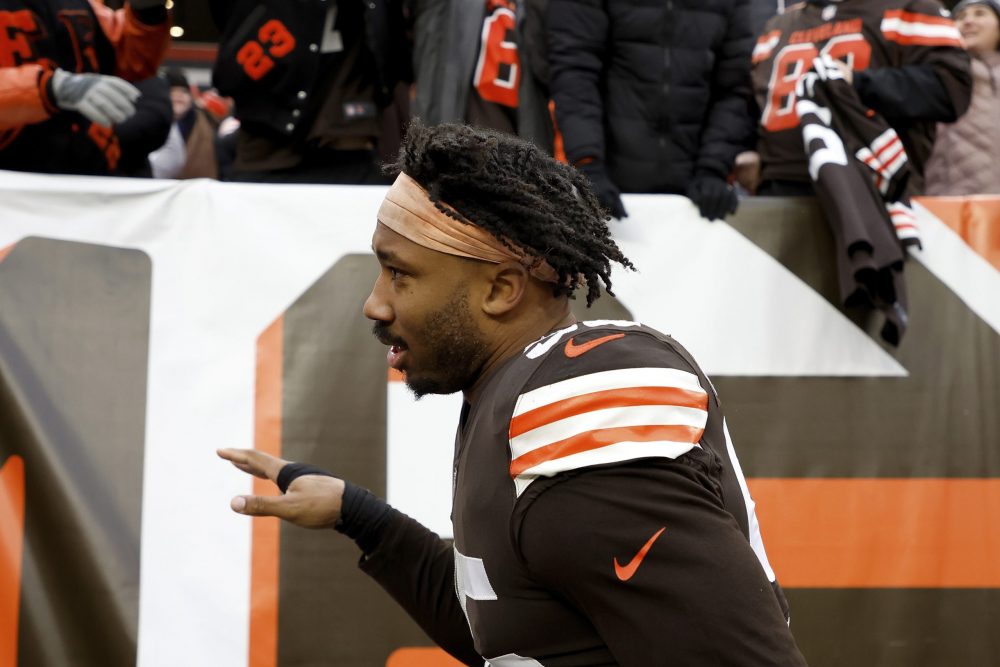 Defensive end Myles Garrett set the franchise’s season sack record with 16 and took a huge step as a team leader.

Left guard Joel Bitonio signed a three-year, $48 million contract extension that could allow him to finish his career with the Browns and was mentioned as a potential Hall of Famer.

The pair again affirmed their place among the NFL’s upper echelon this season and were recognized Friday as Associated Press All-Pro first-team selections. Garrett’s pick was his second straight, while Bitonio made the first team after three consecutive years on the second team.

Right guard Wyatt Teller was the other Browns player to receive votes from the panel of 50 national media members and was a second-teamer for the second straight year. He got two votes to finish second to Dallas’ Zack Martin, who had 46.

In addition to finishing third in the NFL in sacks — Watt led with 22.5 — Garrett scored the first touchdown on his five-year career when he stripped Ravens quarterback Tyler Huntley, recovered the fumble and returned it 15 yards. He had 33 quarterback hits, 51 tackles and three passes defensed as he played the full slate of 17 games after the finishes of his previous two seasons were affected by suspension and COVID-19.

“With Myles, he is so dominant that it is really just playing at the highest level possible on every single snap,” coordinator Joe Woods said before the finale. “I think you guys all saw that this year and some of the games he was able to take over. For me, moving forward with Myles, it is just let’s have that type of performance as many times as possible.

“Continue to lead this defense. They will follow you. I think he has really tried to step up and become that type of person for us defensively, and he will continue to do that into next season.”

Garrett, the No. 1 pick in 2017, also made the Pro Bowl for the third time, including the second straight has a starter. He has qualities of an introvert but felt he needed to take on more of a vocal leadership role in his quest to lead the Browns to a championship.

“Take us to the Super Bowl. That’s the one goal that means everything to me,” he said before the finale. “Everything else can go by the wayside. Of course, individual honors are nice and something I can put up in my house and display and show my family and my kids one day. But that Super Bowl means everything, not only to me, but to the team and to the city. That’s who I play for and who we do it for.”

In pursuit of the title, Garrett called out teammates and coaches publicly and added players-only meetings to the weekly schedule. He delivered after creating the extra attention.

“Just I’m comfortable saying what’s on my mind or speaking my piece and not being afraid to say what needs to be said, whether it’s in the media or private to my team or to my coaches,” he said. “I feel like you don’t need to hold back on the truth if it needs to be heard. So if I need to do that next year, then I’ll do it. If we need somehow to get a kick in the ass or a jump-start, I’m going to be that guy.”

“I think if you look like he does, you are not afraid to kick anybody in the butt,” he joked of the chiseled 6-foot-4, 272-pounder.

Stefanski got serious when discussing Garrett’s development as a leader.

“I see a professional who works hard at his craft, plays very hard and takes on a leadership role and a vocal role when necessary and in his own way,” he said. “I think that is probably the most important part with leadership is being genuine and being who you are. I think that is what we are getting with Myles.”

Browns left guard Joel Bitonio is ready for a snap Dec. 12 in a win over the Ravens at FirstEnergy Stadium.
AP

Bitonio, 30, received 28 of the 50 votes, ahead of Indianapolis’ Quenton Nelson with 13. Bitonio was behind Nelson in the voting the previous three years.

Bitonio, a second-round draft pick in 2014 and the longest-tenured member of the Browns, is a four-time Pro Bowler, including being voted a starter the last two seasons. He played a key role as Nick Chubb finished second in the NFL with 1,259 rushing yards and the Browns ranked fourth with 145.4 rushing yards a game.

Bitonio hasn’t missed a snap in the regular season since the start of 2017.

After signing Bitonio to the extension in November — the $16 million average is tied for highest in the league among guards — general manager Andrew Berry brought up the Hall of Fame.

“Joel is one of our most decorated players and is the ideal personification of our ‘Tough, Smart, Accountable’ mantra,” Berry said in the news release. “We value Joel’s high-level performance, leadership, consistency and durability.

“We are all excited about this extension and hopeful that at the end of his career we will all be looking forward to celebrating Joel’s gold jacket fitting in Canton.”

Garrett has never been shy about his plans to end up in the Hall and was asked how much better he can get in the next few years.

“I don’t know, but I’m going to try to find out,” he said. “I know I can keep on tapping into something else. I’m just entering my prime, so we’ll see what else I’ve got in store.”