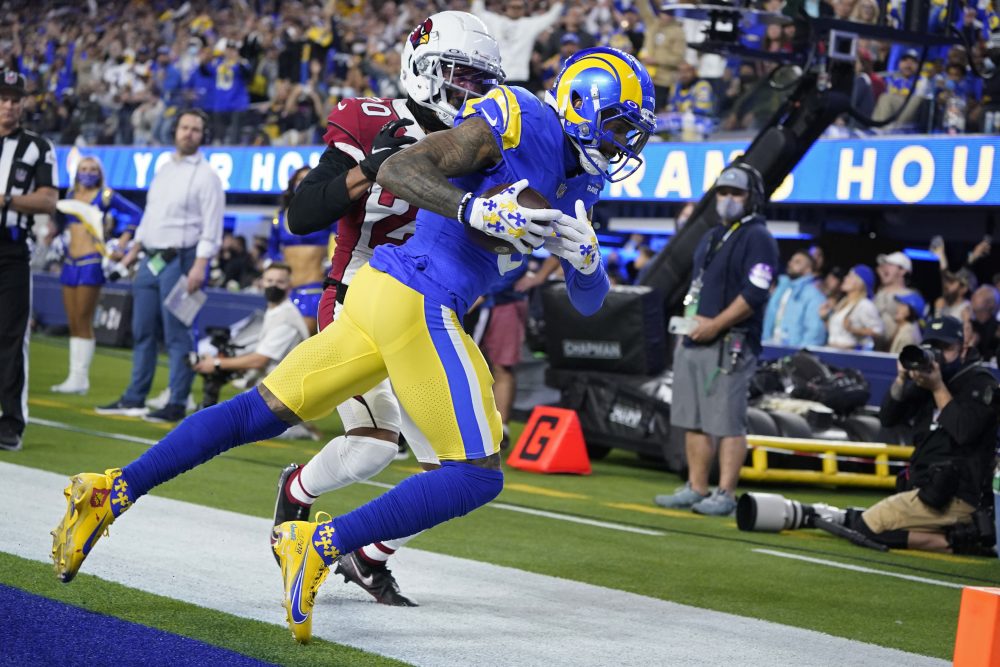 Odell Beckham Jr. has been smiling, dancing and catching touchdown passes as the Los Angeles Rams moved within a game of the Super Bowl.

The Rams version of Beckham is what Browns fans envisioned when then-general manager John Dorsey traded for the superstar receiver in March 2019. The emergence in L.A. has angered Browns fans and forced them to wonder yet again why he didn’t do the same in his 2½ years in Cleveland.

The Rams will host the 49ers on Sunday night in the NFC championship game, and with a win would play the Super Bowl in their home stadium two weeks later. The cameras will be trained on Beckham throughout Sunday, and he’d be a major storyline if he advanced to the Super Bowl for the first time in his eight-year career.


A significant part of the story would be the unsuccessful tenure with the Browns that ended at midseason when they released him after the trade deadline in a move that Beckham had sought for some time. He would be portrayed as lucky to escape a rotten situation, as freed to display his talent by having a more flexible coach and better quarterback on the West Coast than on the North Coast.

That’s part of the story. But only part of it.

The responsibility for Beckham not reaching his vast potential with the Browns must be shared. It also must start with Beckham.

He didn’t want to be traded here from the Giants, then consistently wanted to go elsewhere — nobody can forget the reports of him telling opponents to “come get me” during the 2019 season. He had asked for a trade well before this season started and the relationship with the organization deteriorated to the point general manager Andrew Berry felt he had no choice but to cut him.

Rams edge rusher Von Miller told Sports Illustrated that while they were working out last summer in Colorado Springs he asked Beckham about possibly playing together some day.

The revelation obviously didn’t sit well with Browns fans, even those who took Beckham’s side in the divorce he instigated. The Browns were coming off an 11-win season that included a playoff victory and were considered Super Bowl contenders, so Beckham should’ve been excited for 2021 and recruiting potential teammates.

That he did the opposite is a character flaw. It’s also more evidence of his fickle nature.

Despite all the evidence laid out above, I don’t think it’s accurate to say Beckham was never happy in Cleveland. I talked to enough people, including Beckham, who said he found a comfort zone and was in a good place emotionally.

That’s the thing with Beckham, he’s all over the place.

I don’t blame Berry for trying to make it work as long as he could. Beckham’s injury history and lackluster performance over the last five years had torpedoed his trade value, so the Browns were better off keeping him. That was no longer an option after the drama at midseason.

Beckham’s frustration peaked after he was targeted once — a catch for 6 yards — in a 15-10 loss to the Steelers on Halloween. His father then shared on social media a video showing him running open and Baker Mayfield not throwing him the ball, and liked the resulting criticism of Mayfield. Beckham didn’t stop his dad or apologize.

He was told not to report to team headquarters, and the divorce proceedings began.

After he was released and cleared waivers, he signed with the Rams. He’s always loved L.A., and it shows.

The difference is in the touchdowns. He had none with the Browns and has six with the Rams, including one in the wild card round vs. the Cardinals. In two playoff games he’s caught 10 of 12 targets for 123 yards and the score.

Beckham, 29, never lost his special talent. Even after surgery to repair a torn anterior cruciate ligament in November 2020, which followed ankle and core muscle surgeries in previous years, he looked dynamic running routes. He may not be the same guy that won Offensive Rookie of the Year in 2014, but he’s close.

We just didn’t see enough examples in Cleveland, which is where the shared blamed comes in.

He didn’t always run the right routes and dropped some key passes, including a fourth-down shallow cross vs. the Chargers in a loss this year. But someone with his talent needs opportunities, and coach Kevin Stefanski and Mayfield didn’t give him enough.

Rams coach Sean McVay doesn’t have a problem getting Beckham one-on-one matchups — and the ball — in the red zone. Stefanski did.

I understand Stefanski not overhauling his system for Beckham, but Stefanski talks a lot about players over plays, and that just wasn’t evident often enough with Beckham.

The Mayfield-Beckham disconnect is the other piece of the equation. Perhaps Mayfield got to the point that he didn’t trust Beckham to be where he was supposed to be, but he also missed him too many times — not seeing him open and misfiring when he did try to deliver the ball.

Beckham’s departure is on him. He didn’t want to be here and made sure the situation became unsalvageable.

His failure to meet expectations is on him, Stefanski and Mayfield.

Beckham is where he wants to be with the Rams, and it’s obvious in his play.

He’s one win from getting to where the Browns have never been, which is more agony for their fans.

Commentary: So maybe this Baker Mayfield guy isn’t so bad after all
Commentary: Allegations of paying to lose put NFL, Browns in uncomfortable spotlight