Jim Ingraham: Browns can’t afford another down year so getting the QB decision correct is crucial 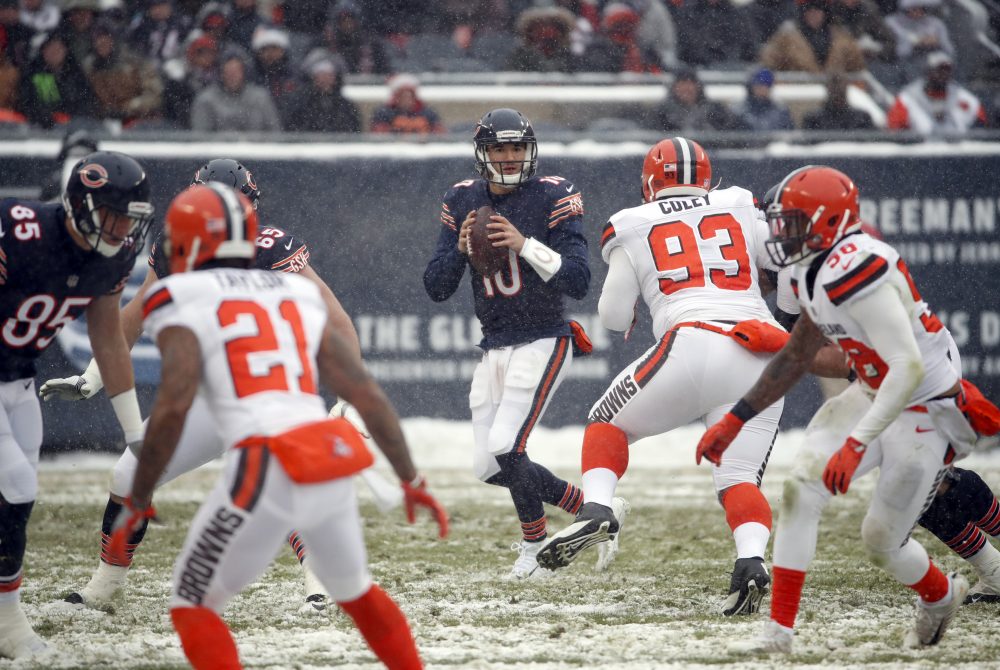 Even in the offseason the clock is ticking, and the Browns are on it. What clock is that? The clock on the shelf life of the formidable roster Browns general manager Andrew Berry has constructed. That roster is built to win now, not later. The dismal 8-9 egg laid by Berry’s team in 2021 offers a chilling reminder that it’s getting later earlier than expected at Haslam Acres.

Berry, the Browns’ most tuned-in timekeeper, knows that better than anyone. Simple economics reminds us that star-laden teams can very quickly become expensive teams with expiration dates that, in the NFL’s salary-cap universe, make those rosters hard to maintain indefinitely.

For a built-for-the-now team, a losing season is a wasted season. And a wasted season can force a general manager to wrestle with even harder decisions, the outcomes of which are accompanied by enormous consequences, both good and bad.


All of which is a long-winded introduction to: The Case For Mitch Trubisky.

Maybe Baker Mayfield is still the answer. But — equally as maybe — maybe he’s not. Can Berry afford to roll those dice? With a ticking clock? To risk another 8-9, miss-the-playoffs-with-a-loaded-roster season?

For those who lost track of him, Trubisky, the former Pro Bowl quarterback for the Chicago Bears (2018), spent the 2021 season in the federal witness protection program, which is what they should call the position of backup quarterback to Josh Allen in Buffalo.

Trubisky signed a one-year, $2 million contract with the Bills, so he’s a free agent and, it seems likely, is unlikely to sign with any team for a 2022 figure anywhere close to the $18.8 million Mayfield is due to make. That Trubisky is also a graduate of Mentor High School would seemingly, potentially, make his recruitment by the Browns a slam dunk.

So would Trubisky’s career statistics, presented here, with Mayfield’s in parenthesis:

The biggest gap between the two is their 2022 salaries, Mayfield at $18.8 million, and Trubisky at whatever figure he can get from whatever team signs him. It’s hard to imagine him staying in Buffalo behind the unstoppable, indestructible Allen.

The rest of the quarterback market? In the pipe dream category for Browns fans would be Aaron Rodgers, whom the Packers may or may not trade. But Rodgers would probably take one look at the Browns’ anemic receivers room and respond with a polite, “Uh, no thanks.”

Derek Carr ($19.7 million in 2022), Russell Wilson ($19 million) and Kirk Cousins ($35 million) are potential trade targets of varying degrees of allure, but all come with even bigger numbers than what Mayfield is owed in 2022. I also didn’t realize it until I looked it up, but Wilson is 33 and, at 5-11, two inches SHORTER than Mayfield.

Or, if you’re feeling nostalgic, how about Colt McCoy? Yes, he’s still in the league.

In other words, generally speaking, this is a bad time to be looking for a new quarterback, which might be bad news for the Browns, but good news for Mayfield.

The Browns cannot afford consecutive wasted seasons. Is there a camouflaged golden boy in this year’s seemingly underwhelming class of draftable quarterbacks? Can Berry pull a Josh Allen out of his hat at No.13?

In today’s NFL, if your team wasn’t in the playoffs, your team probably needs a quarterback. But franchise quarterbacks don’t grow on trees. Just ask the Browns. They thought they had one, and maybe they do. Or maybe they don’t.

Knowing is sometimes worse than not knowing.

Analysis: Brian Flores should distance himself from Hue Jackson, because their situations aren’t the same
Commentary: Seeing Odell Beckham Jr. and the Bengals playing in the Super Bowl just adds to Browns’ misery