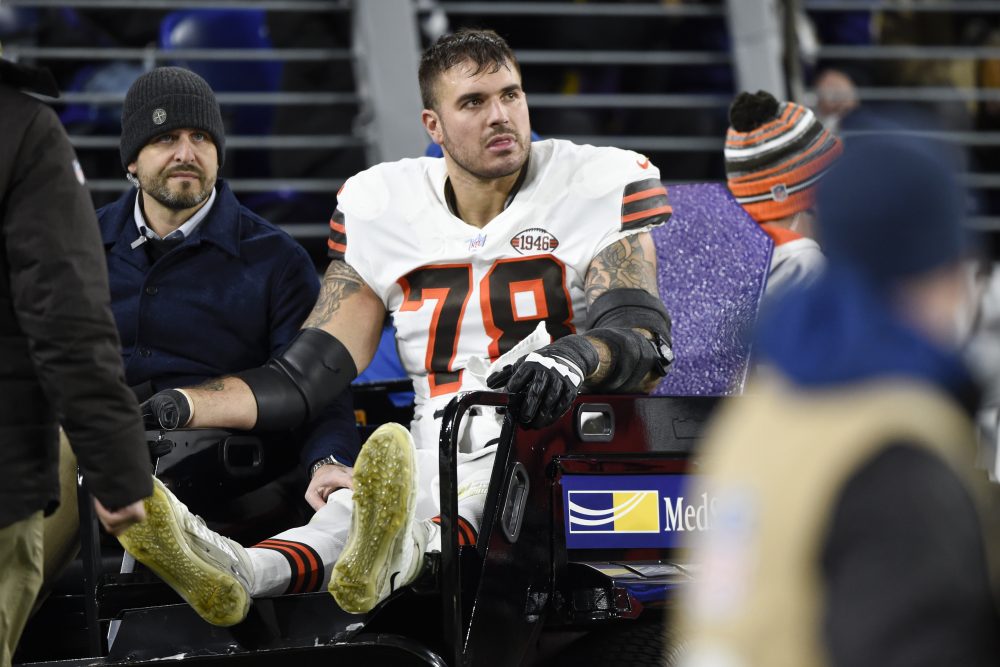 Berry also has no plans to move left tackle Jedrick Wills Jr. to the right side if Conklin’s recovery hits a snag.

Conklin’s right patellar tendon tore Nov. 28 vs. the Ravens. He and the Browns restructured the final year of his three-year, $42 million contract last week.


The $12 million salary for 2022 wasn’t guaranteed, but $8 million is guaranteed after the reworking, with $4 million able to be earned through playing-time incentives, according to ESPN. He would begin to earn the $4 million by playing 55 percent of the snaps and receive the entire amount at 75 percent.

“Jack’s doing well,” Berry said Tuesday at the scouting combine. “He’s right on schedule, if not a little bit ahead of schedule. He’s working hard. We see him at the facility every day.

“We’ll take it day by day and week by week but we’re optimistic he’ll make a strong return for us.”

Wills missed time last season after an ankle injury in the opener, and veteran backup Chris Hubbard was lost for the year with a torn triceps suffered in the opener. The Browns struggled at tackle throughout the season as guard Blake Hance and rookie fourth-round tackle James Hudson III were forced into action. All-Pro left guard Joel Bitonio even played two games at left tackle when the Browns were hit with COVID-19 absences.

Wills, the No. 10 pick in 2020, played right tackle in high school and at the University of Alabama before being drafted to play left tackle. Berry said Wills moving to the right side isn’t part of the contingency plan if Conklin’s not ready for Week 1.

“No, Jed will stay at left tackle. We feel good about the depth that we have at the tackle position,” Berry said. “Like any other position, if there is an opportunity to add a player there, that’s not out of the question this offseason. As we all saw (last) year, you can never have enough tackle depth and O-line depth. But we feel good about Jed.”

Andrew Berry thanks Jarvis Landry for all he’s done, believes David Njoku’s best is yet to come

Coach Kevin Stefanski made it clear when he arrived in January 2020 that he valued practicing against another team in training camp. He hasn’t changed his opinion.

The Browns will host the Philadelphia Eagles for joint practices this summer. Zac Jackson of The Athletic was first to report the news.

The Browns hosted the Giants for two practices last year before meeting in a preseason game at FirstEnergy Stadium. Stefanski planned to practice vs. the Packers in Wisconsin in 2020, but the pandemic canceled such trips.

Stefanski was raised in Philadelphia, and Berry worked for the Eagles and general manager Howie Roseman before returning to the Browns in 2020. Berry said Stefanski and Eagles coach Nick Sirianni, a Mount Union graduate, did most of the work setting up the practices. The schedule hasn’t been announced, but the Browns and Eagles will play a preseason game.

“Obviously, Howie and I are very close. We were pretty excited about that,” Berry said. “It’s a great organization, great coaching staff, great front office. I obviously have a lot of friends in that organization, so we’re looking forward to hosting them.”

Before Berry took his place at Podium 3, new Vikings general manager Kwesi Adofo-Mensah stood at Podium 2 and praised Ryan Grigson, who followed Adofo-Mensah from Cleveland to Minnesota to work in a senior personnel position. Berry was left without two of his top lieutenants.

“I think we have a really deep bench of front office talent,” he said. “And certainly the next several months gives people an opportunity to step up into more expanded roles. But really kind of a longer-term restructure of the front office, wait till after the draft.”

“Look, I feel like we’re gonna end up being a farm system for the NFL — and that’s a good thing if that’s the case,” Berry said. “Glenn is super well-rounded. Pro, college (scouting) background. Does operations. Very bright, outstanding people skills.

The Browns received a third-round compensatory pick in the 2022 draft as part of the NFL’s plan to reward organizations for developing minority coaches and front office personnel.

“That’s not something that really comes to mind as we think about hiring our front office staff or anything like that,” Berry said. “It’s an added bonus, but the thing I’m most excited about is for him to get the opportunity to lead a team.”

Berry said he’s remained in contact with defensive tackle Malik McDowell since he was arrested in Florida in January on charges of aggravated battery on an officer, resisting an officer/obstructing with violence and public exposure. Video shoed him charging and striking an officer while naked.

Berry declined to answer when asked if there’s a chance McDowell could return to the roster. He’s an exclusive rights free agent.

“Primary focus is on his well-being and kind of working through his personal stuff,” Berry said.

Berry said he’s “definitely open” to drafting a kicker or punter. The Browns have an opening at both spots.

** Berry didn’t have an update on an extension for Pro Bowl cornerback Denzel Ward, who’s set to enter the final year of his rookie contract.

“We’ll see how that plays out over time, but had a great year for us,” Berry said. “Homegrown talent. He’s obviously a core guy for us.”

** The league has transitioned away from the Wonderlic test, which was used as a cognitive measure.

“Quite honestly, we thought the Wonderlic was outdated,” Berry said. “That’s not really something that really held a lot of weight for us.”