Notes: OSU’s Garrett Wilson calls Baker Mayfield “my guy,” says it would be “awesome” to play with him 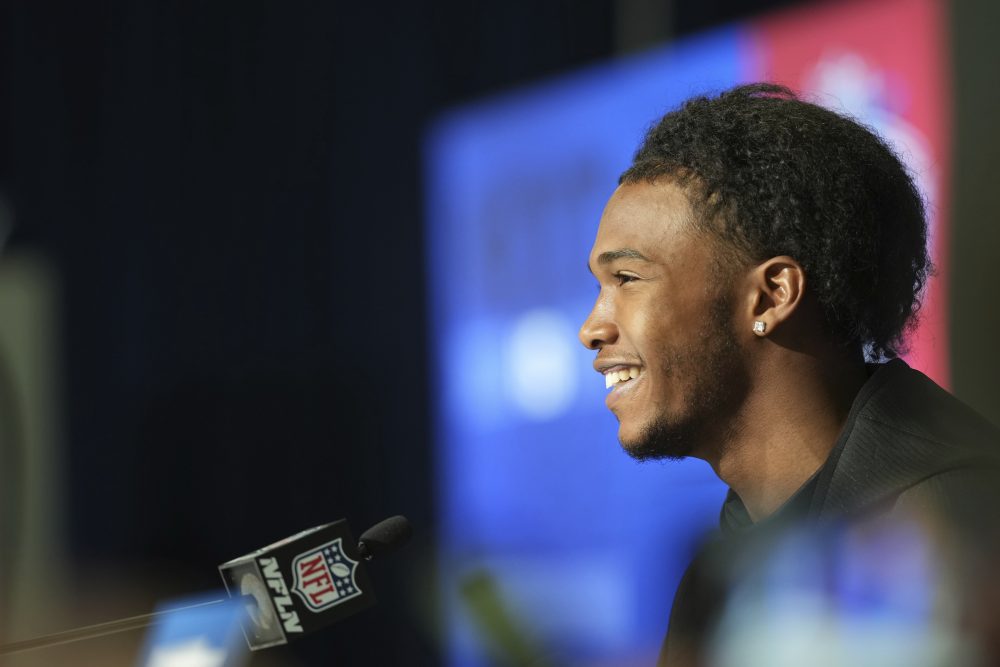 INDIANAPOLIS — Ohio State receiver Garrett Wilson to the Browns with the No. 13 pick in the draft makes sense … if he’s still on the board. He’s in the discussion to be the first receiver chosen after 70 catches for 1,058 yards and 12 touchdowns in 11 games in 2021, the last of his three seasons.

“Baker’s my guy,” Wilson said Wednesday at the scouting combine. “He was always a little older than me and he would come back and coach seven-on-seven. During the quarantine, we actually threw together a couple times. So I know that Baker is a great player. We have a good relationship.”


Wilson (6-foot, 192 pounds) said he already had a formal interview with the Browns at the combine.

“It would be great to link up with Baker. Baker’s someone that did all the things that I wanted to do. Being a Heisman (Trophy) winner, that’s stuff you can only dream about, so watching him ball when I was younger, that was really awesome. Having that opportunity to maybe have that happen again would be awesome.”

Fellow Buckeyes receiver Chris Olave isn’t expected to be drafted as high as Wilson but is in line to be a first-round pick. Ohio State hasn’t had a receiver drafted in the first round since Ted Ginn Jr. was picked No. 9 in 2007.

“Being the competitors we are, we definitely compete at everything we do,” Wilson said of Olave. “We’re always pushing each other to be better and be the best. We’ve had a great friendship.”

Olave (6-1, 188) doesn’t have the Mayfield connection but would be happy if the Browns picked him. He called them a “great” organization and added the fan base is “crazy.”

When the Browns’ season concluded, multiple players said the team chemistry needed to be improved. Rookie linebacker Jeremiah Owusu-Koramoah said “brotherhood really matters,” and safety John Johnson III said there are guys on the team who have “probably never spoken to each other” given the COVID restrictions.

Coach Kevin Stefanski dismissed the idea there’s a problem in the locker room.

“We had a disappointing season. A lot of times winning is a deodorant and then all of a sudden you lose and you want naturally to think everything is broken,” he said. “That’s not the case.”

The midseason departure of receiver Odell Beckham Jr. appeared to damage the cohesion, as many players said they would welcome him back despite his father’s public criticism of Mayfield and Beckham not apologizing for it. Beckham was released, signed by the Rams and won a Super Bowl.

“I am not going to rehash that, but obviously happy for Odell, and I wish him well,” Stefanski said.

Receiver Jarvis Landry is expected to be released before free agency begins March 16 if he and the Browns can’t agree on a restructured contract.

“You’ve seen countless examples of this is a business. I think the players understand that and sometimes there’s situations that are hard.”

The Ohio State receivers will have company at the top of the draft and for consideration by the Browns. USC’s Drake London (6-5, 210) said his meeting with the Browns “went great.”

London is coming off an ankle injury and won’t run the 40-yard dash at the combine but hopes to at his pro day. He also played basketball early in his time at USC and believes that experience translates to the football field.

He was asked when he gave up his NBA dream.

“It’s still out there,” he said laughing. “So who knows? Definitely focused on this right now.”

Pitt’s Kenny Pickett believes he should be the first quarterback drafted. Some analysts agree, but the size of his right hand could be an issue.

He didn’t get measured at the Senior Bowl as he worked to extend the distance from the tip of his thumb to the tip of his pinkie before the combine. He’s scheduled to be measured Thursday.

“It’s just exercises I’m doing. The reason why I didn’t measure at the Senior Bowl was to have those extra couple weeks,” said Pickett, who was late to his news conference because he got delayed by the medical examination. “Whatever it measures, it measures. I’m sure that won’t be the last of it. But it’ll be the last measurement I take of it.”

The Browns could be in the market for a quarterback in the draft depending on how free agency goes, and Stefanski said hand size is important.

“It is something we talk about a lot. There are exceptions to every rule, though,” he said. “Certainly there are guys who played well into the postseason this year that were at 9 (inches). We just have to take it player by player.”

“I did not watch,” Stefanski said, adding Garrett didn’t need his permission to play. “No, it was a charity game. He did a nice job. He wanted to make sure he put his athleticism on display.

“That was a great weekend for Cleveland. I was able to go down Saturday night to the Dunk Contest and Three-Point Contest. Cleveland, the city, the fans and everybody did a great job.”

** Alabama receiver Jameson Williams said he’s ahead of schedule in his recovery from a torn anterior cruciate ligament suffered in the national championship. He hopes the injury doesn’t affect his draft status and he’s considered among the top receivers.

** Cardinals receiver Andy Isabella, a Mayfield High School graduate, has been given permission to seek a trade, his agent told USA Today. Isabella was a second-round pick out of Massachusetts in 2019 but has only 31 catches and three touchdowns in 36 games.