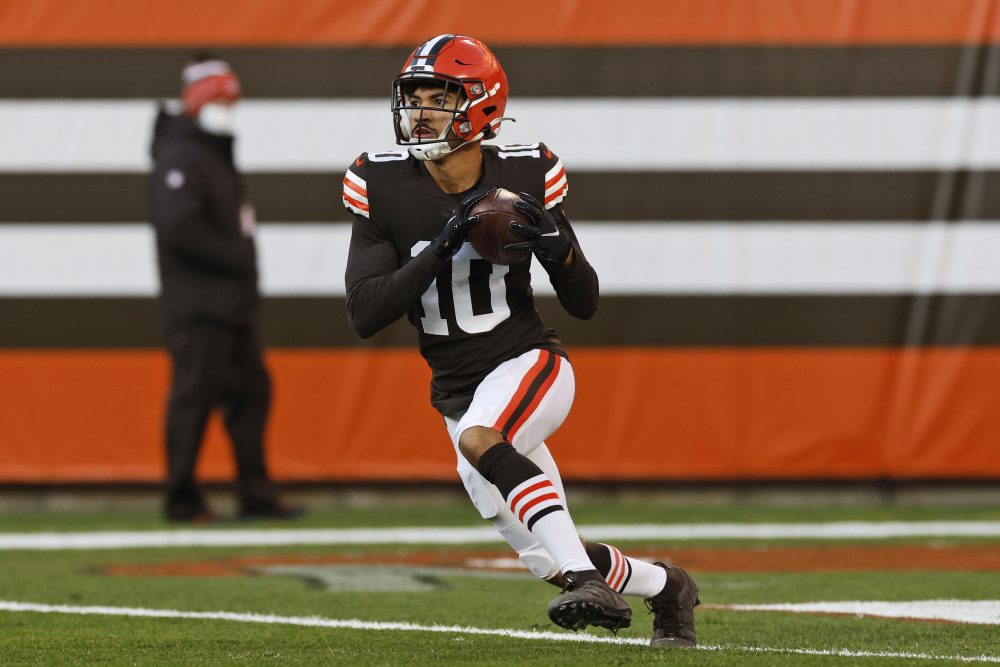 INDIANAPOLIS — The focus shifted to the field Thursday as workouts began inside Lucas Oil Stadium at the NFL scouting combine.

While position drills, the 40-yard dash and other tests are important, sometimes the work done in the interviews makes the biggest impact.

The combine was canceled last year because of the pandemic, but the Browns met virtually with prospects, including Auburn receiver Anthony Schwartz, whom they drafted in the third round with the 91st pick.


“With Anthony, it was really his mental makeup that impressed us right away,” coach Kevin Stefanski said Wednesday. “We knew he was a world-class sprinter, but until we got him on a Zoom in a combine setting, then we understood what kind of learner he was.

“It was very clear that he would have no problem lining up anywhere. He got it right away, so was very comfortable with the learning ability from Anthony and that we would have a young player who we could align across the formation. Those are the type of things you are looking for, but that is not going to be everybody.”

The Browns are going through a transformation at receiver. No. 1 wideout Odell Beckham Jr. was released at midseason, and No. 2 Jarvis Landry is expected to be released unless he and the team can’t agree on a contract restructure. He’s due nearly $15 million in 2022, the last year of the deal, and the Browns would take only a $1.5 million salary cap hit if they cut him.

No matter whom the Browns add through trades, free agency and the draft, they’ll expect Schwartz and Donovan Peoples-Jones, a sixth-round pick in 2020, to take on bigger roles. Schwartz played in 14 games and had 10 catches for 135 yards and a touchdown. In 14 games, Peoples-Jones had 34 catches for 597 yards and three touchdowns after 14 catches for 304 yards and two TDs in 12 games as a rookie.

“He was hampered by injuries a little bit and then had a concussion that he battled but made some plays for us this season, which you do not often see for a young guy,” Stefanski said of Schwartz. “He can still run, and we are going to hopefully develop him in some of the finer points of route running.

“Donovan is a guy who is steady for us and very, very trustworthy. Quarterbacks love throwing to him because he is going to be where he has to be every single time. Good ball skills. A guy who we are looking forward to taking another step forward.”

Notes: OSU’s Garrett Wilson calls Baker Mayfield “my guy,” says it would be “awesome” to play with him

North Carolina quarterback Sam Howell said the Eagles made him shoot baskets on a mini-hoop to start his interview session.

“I only made two out of five, so probably not high up on their board right now,” he said.

Eagles coach Nick Sirianni likes to measure competitiveness. Stefanski chooses to get right into the tape because the sessions are timed.

“They have those TVs in there, and they are showing you the time roll off so you are trying to make the most of it,” Stefanski said. “Coach Sirianni is a big hoops fan — he is wearing his Sixers shirt right now — but we try to dig right into the tape almost immediately.”

Sean McVay of the Rams, Kyle Shanahan of the 49ers and Robert Saleh of the Jets didn’t make the trip to the combine, but Stefanski felt it was important for him to attend.

“I like being here. I like seeing the players up close and personal, sitting down with them and watching tape with them,” he said. “I like being out there when they start the workout portion of this. I like seeing all of the quarterbacks throw at the same time. I do think there is value being in person.”

Safety John Johnson III said after the season that he told Stefanski and general manager Andrew Berry in his exit interview he thought the Browns needed to be more proactive about player health, including soft-issue injuries. He mentioned adding a yoga instructor and improving the relationship with the training staff.

“I will be able to share some more with you guys later in terms of what we are doing in our building and adding some resources to our building,” he said. “Maybe in the next couple of weeks I can explain that to you. Want to make sure that we offer as many resources as we can to our guys.”

The official measurements started Thursday, and Pitt quarterback Kenny Pickett came in at 6-foot-3¼, 217 pounds with 8.5-inch right hand. Teams prefer quarterbacks above 9 inches, and he reportedly will have the smallest hands of any quarterback in the NFL. Pickett, who’s in consideration to be the first quarterback drafted, fumbled 26 times in his five-year college career.

Ohio State tight end Jeremy Ruckert won’t run at the combine after suffering plantar fasciitis at the Senior Bowl. He said the foot injury wasn’t serious but he couldn’t train for a couple of weeks.

“I didn’t want to come out here and not be prepared or hurt it a little but worse,” he said Wednesday. “I wish I could have run for everybody. That’s kind of the big question with me. But I’m going to be benching. Didn’t want to come here and do nothing.”

He’s planning to try to get ready for the OSU pro day March 23.

Berry said Tuesday he’s open to drafting a kicker or punter, and Stefanski said he’d be involved in any interviews with the specialists.

“We will get to know all of those guys at every position,” he said.

** Stefanski led the league in using three-tight end packages but said he’s willing to adjust depending on the roster.

“We talked a lot about 13 personnel (one receiver, three tight ends) because those are our tight ends and we feel strongly about those players,” he said. “If your roster evolves, you better be ready to evolve, but we are not tied to any one specific personnel.”

Notes: OSU’s Garrett Wilson calls Baker Mayfield “my guy,” says it would be “awesome” to play with him
Notes: Running backs coach Stump Mitchell returns after missing last 10 games of 2021 with health issues