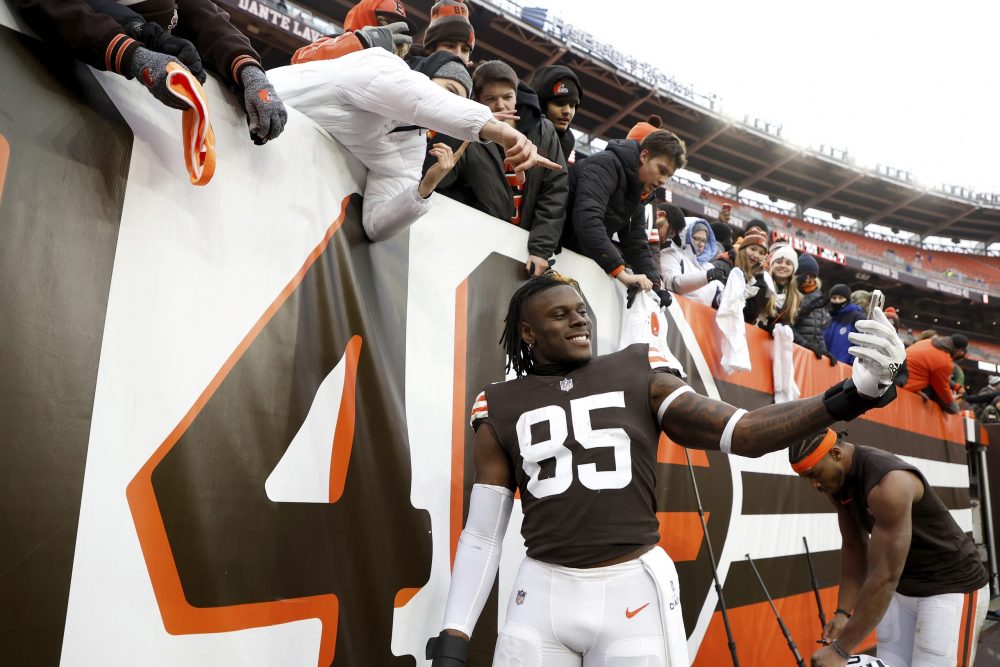 The Browns don’t want to lose tight end David Njoku. Not when they believe the best is yet to come.

So after being unable to reach agreement on a long-term contract extension, the team used the franchise tag Monday to keep Njoku from hitting the market when free agency starts March 16.

The tag is usually reserved for the league’s upper-tier players, but the Browns continue to bet on Njoku’s potential. In five years since being the No. 29 pick in 2017, he’s yet to make a Pro Bowl and has been the team’s No. 1 tight end for only one season, 2018. He won’t turn 26 until July.


“He’s come a long way. I would say both on and off the field,” general manager Andrew Berry said last week at the scouting combine. “That’s a credit to him and how hard he’s worked. I think he’s close to maturity, and I think as his opportunities increase, his impact will grow.”

The franchise tag is $10.931 million for tight ends in 2022. It’s the average of the top five salaries at the position from the previous season.

The non-exclusive tag used by the Browns almost guarantees Njoku will return, because another team would have to reach a contract agreement with him, then give the Browns two first-round draft picks if they declined to match the offer.

The league’s deadline to apply a tag is Tuesday. The Browns will continue to negotiate toward a long-term deal.

Njoku might’ve been the most-sought-after tight end in a free agent class without much star power, potentially drawing a contract worth more than $12 million annually. The tag allows the Browns to secure him for 2022 for less than that while working toward a multiyear deal.

The Browns had previously only used the franchise tag on kicker Phil Dawson, in 2011 and ’12.

The best game of his career came Week 5 last year during a 47-42 loss to the Chargers. He tied a career high with seven catches for a career-high 149 yards, including a 71-yard catch-and-run for a touchdown.

It’s the only time he’s reached 80 yards in a game, and just the fifth time with five or more catches. The other four came in 2018, when Njoku posted career highs with 14 starts, 56 catches, 639 yards and four touchdowns.

Njoku was unhappy after the Browns signed free agent Austin Hooper and drafted Harrison Bryant in 2020 and requested a trade. Njoku had a change of heart last year and declared he wanted to continue his career in Cleveland.

“I love it here. I love it here to the core,” he reiterated after the season. “I honestly want to be here for the rest of my career.”

Notes: David Njoku says he wants to finish career with Browns — I love it here to the core

The commitment to Njoku, especially financially, raises questions about the future of Hooper, who was ahead of Njoku on the depth chart the last two seasons.

Hooper is owed $9.5 million in 2022, and the Browns, who lead the league in multiple-tight end packages, will likely try to restructure the deal. They would have to take an $11.25 million salary cap hit if they cut him, although they could defer $7.5 million of the hit until 2023 if they designated him as a post-June 1 cut.

Hance, whom the Browns prefer at guard, started six games at right tackle and two at left tackle last year due to injuries to Jack Conklin, Jedrick Wills Jr. and Chris Hubbard.

Bradley had four catches for 64 yards in five games and has appeared in eight games in two years with the Browns since arriving as an undrafted free agent.