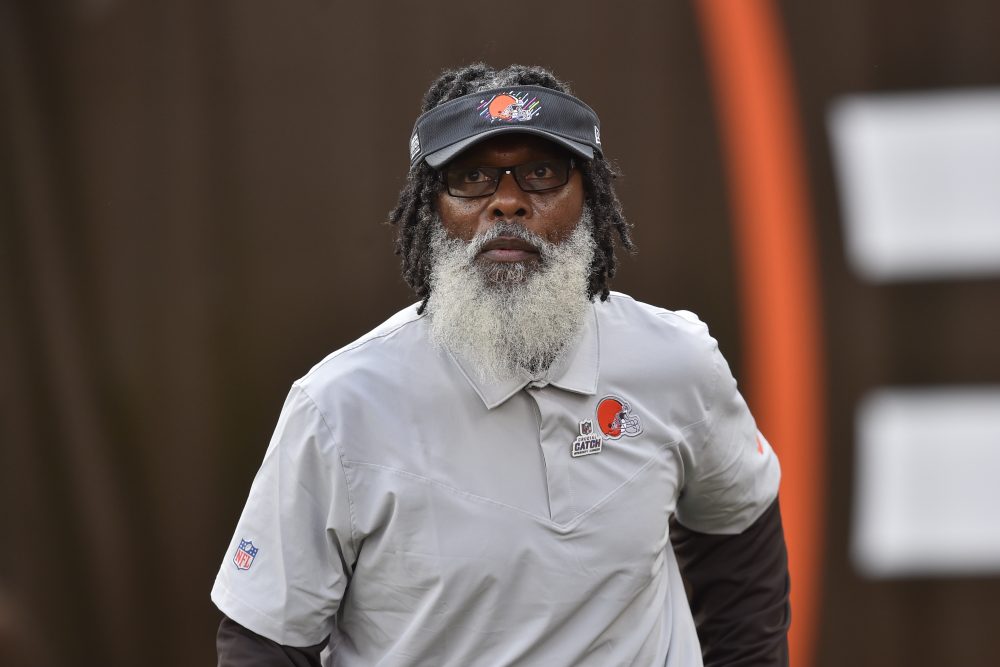 The Browns have a valued piece of their coaching staff and run game back for 2022.

Run game coordinator/running backs coach Stump Mitchell has returned to team headquarters and will coach this season, the team announced Tuesday. Mitchell, 62, missed the last 10 games of 2021 after two procedures following a previous knee injury that began bothering him in June.

Mailbag: Which receivers impressed most at scouting combine

“It’s definitely an adjustment,” Mitchell, who didn’t think he’d missed a game in 30 years as a coach, said in the news release announcing his return. “You want to be able to play and help your team out, and you try to do that by supporting them. But it’s still not the same as being there. You want to be in front of the guys. You want to be in the battle with them as well.”


Before shutting it down, Mitchell tried to coach through the pain. When he decided he couldn’t, Ryan Cordell, Kevin Rogers and Callie Brownson led the running backs.

Mitchell returned to his full-time duties at the end of February. He’s entering his fourth season with the Browns.

With Nick Chubb, Kareem Hunt and D’Ernest Johnson, the Browns were fourth in the NFL last season with 2,471 rushing yards and led the league with 5.09 yards per carry. Mitchell kept in contact with the group and had weekly Zoom meetings with Cordell, Rogers and Brownson to review the game plan.

“I thought (Cordell and Brownson) did a remarkable job with the guys,” Mitchell said. “One good thing about this organization is that we all think we’re pretty good from top to bottom, so when anyone ever steps in as a coach or as a player, we feel like we can get the job done.”

In addition to her role as coach Kevin Stefanski’s chief of staff, Brownson will serve as assistant receivers coach this season. Cordell took a job with the Vikings as pass game specialist/game management coordinator.

Chubb rushed for 1,259 yards, finishing second in the NFL for the second time in his career. He missed three games, averaged 5.5 yards a carry and rushed for eight touchdowns. The Colts’ Jonathan Taylor led the league with 1,811 yards.

“For him to finish second in the league in rushing is pretty good because of the way we do things in terms of him getting touches, Kareem getting touches or D’Ernest getting touches,” Mitchell said of Chubb. “He’s always on stride to be No. 1, but I don’t know, with us splitting carries with the way it is, if that will ever happen. But it’s always going to be his goal. He’s never going to settle for being No. 2, but at the end of the day, all he can do is his best and just answering the bell.”

Johnson’s breakthrough was a pleasant surprise during a disappointing season in which the Browns went 8-9 and missed the playoffs. Johnson rushed for 534 yards, a 5.3 average and three touchdowns, including three games of at least 95 yards.

“When you can get your backup to come in and perform just as well as those guys, that’s what we aim and coach for,” Mitchell said. “That’s when we as coaches take our pride in coaching the second- and third-string guys because we know at some point in time, they’re going to be our first-string guy.”

Purdue receiver David Bell didn’t hesitate when asked the best defensive back he faced in his college career.

“Greg Newsome, hands down,” Bell said last week at the scouting combine, referring to the Browns’ first-round pick in 2021. “He definitely gave me the most trouble.

“He was just patient. It was definitely something new for me, and the things that I usually do to win against DBs, it didn’t really work on him. So that’s definitely a game that even up to this day that I still watch. It still haunts me that I let one slip away.”

** Oregon defensive end Kayvon Thibodeaux believes he’s a better version of Cleveland’s Jadeveon Clowney, who was the No. 1 overall pick of the Texans in 2014.

“You look back to Jadeveon Clowney, he’s a guy who was great, but he didn’t have all the skills and the tools as far as pass rush skills and things like that,” Thibodeaux said. “Me, I feel like I’m going to kind of build off of him.

Dr. James Voos, head physician for the Browns, was named vice president of the NFL Physicians Society during the combine. He’ll become president in 2024.

“It is an honor to serve the NFL Physicians Society in this role. We are committed to advancing health and safety initiatives for football into the future,” he said in the news release.