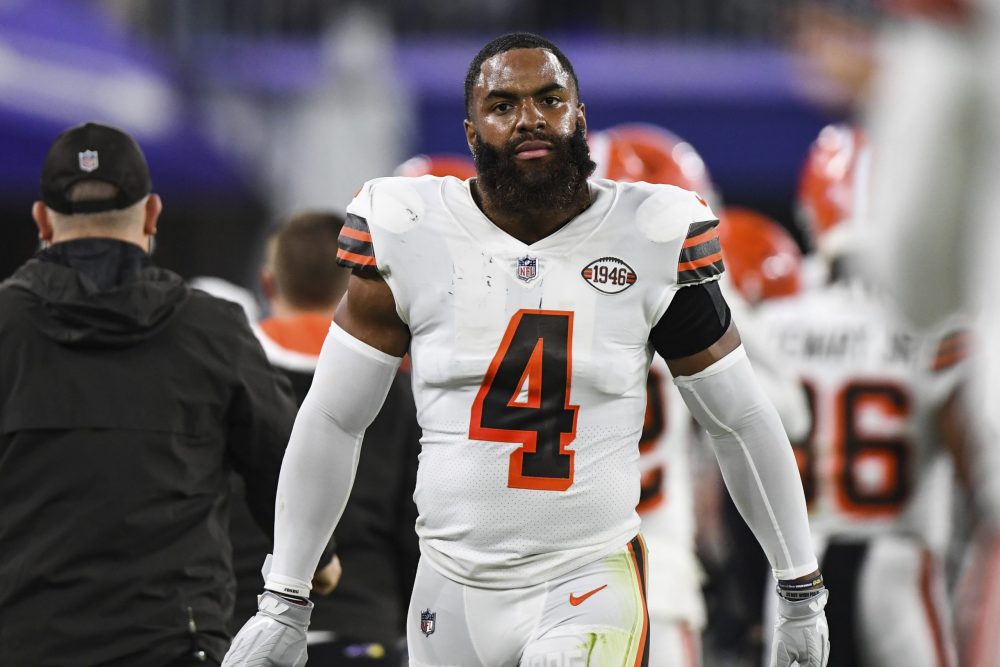 Middle linebacker Anthony Walker Jr. and offensive lineman Chris Hubbard agreed to one-year contracts to return after being eligible for free agency, the team announced. Walker’s deal is worth $5 million.

Amari Cooper says he can’t wait to play for passionate Browns fans, goal is all about winning

Walker signed a one-year, $3 million contract as a free agent last year after four seasons with the Colts. He quickly became a team leader and started 12 of 13 games, totaling a team-high 113 tackles, two for loss, a sack and two passes defensed.


“Last year when we brought in A-Walk, we knew we were getting a smart and productive linebacker,” coach Kevin Stefanski said in a news release announcing all the team’s moves. “He proved us right in those areas. He also possesses those leadership qualities that you can’t have enough of on your team, and we are thrilled to have him back.”

Walker, 26, gives the Browns a veteran in a young linebacking group, joining Jeremiah Owusu-Koramoah, Jacob Phillips and Sione Takitaki. The Browns drafted Phillips in the third round in 2020 and envision a larger role for him, but he’s been hurt in both his seasons, playing a total of 13 games.

The Browns agreed Tuesday to trade linebacker Mack Wilson to the Patriots for pass rusher Chase Winovich, and it became official Wednesday.

Hubbard should fill the void at swing tackle.

Hubbard, who will turn 31 next month, joined the Browns in 2018 as a free agent from the Steelers. He started 30 games at right tackle before being demoted to the top backup in 2020.

He played well in that role, starting five games and playing across the line, before suffering a torn quadriceps and dislocated kneecap late in year. He rehabbed and was ready for the opener last year, then suffered a triceps injury Week 1 while filling in for left tackle Jedrick Wills Jr., who had injured an ankle.

Hubbard tried to practice through it but couldn’t, was placed on injured reserve and had surgery.

“Versatility is something we value and Hub has proven that he can play at a consistent level at just about every spot on the offensive line,” Stefanski said. “He is working really hard to make a full recovery from is injury and his veteran presence brings so much to our O-line room. I’m glad he will be back.”

Analysis: Pursuit of Deshaun Watson could signal end for Baker Mayfield in Cleveland even if Browns don’t trade for Watson

Receiver Rashard Higgins’ run in Cleveland is over.

Higgins, a fifth-round pick of the Browns in 2016, agreed to a one-year deal with the Carolina Panthers. He had re-signed with the Browns the last two offseasons despite being a free agent, but that wasn’t going to happen after he slid down the depth chart in 2021, managing only 24 catches for 275 yards and a touchdown despite a rash of receiver injuries.

Higgins enjoyed playing here and became a fan favorite. He isn’t the fastest, biggest or strongest but fought to make a career, even spending time on the practice squad after being cut early in his career.

The Browns signed free agent defensive tackle Taven Bryan from Jacksonville and hope he can live up to his first-round draft status. The Jaguars picked him No. 29 in 2018, but he’s started only 17 of 63 games with 86 tackles. 5.5 sacks, a forced fumble and a pass defensed.

“Taven Bryan is a young player with a lot of upside,” Stefanski said. “He is a big, physical player in the middle of the defense. He is going to fit in well with our group on the defensive line.”

Bryan (6-foot-5, 291 pounds), who signed a one-year deal worth up to $5 million, should get the chance to compete for a starting spot. The starting tackles from last year, Malik McDowell and Malik Jackson, aren’t expected to return.

Winovich was a third-round pick of the Patriots in 2019. He appeared in 45 career games with 69 tackles, 11 sacks — 5.5 in each of the first two years — a forced fumble and an interception.

He played outside linebacker in New England but is expected to compete for time at defensive end.

“We’re excited about adding Chase Winovich to our defense,” Stefanski said. “He’s a high-energy football player with relentless pass rush ability and we think he will fit in well with our defensive scheme.”