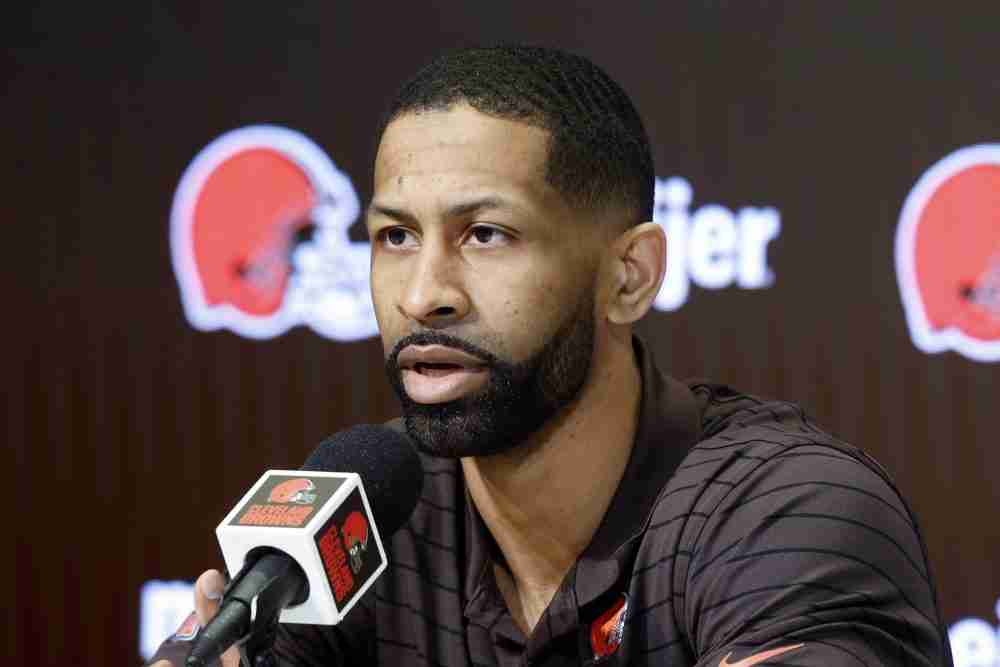 BEREA — General manager Andrew Berry’s one year away from the Browns since 2016 was spent with the Eagles in 2019. Then-general manager John Dorsey traded Cleveland’s first-round pick for receiver Odell Beckham Jr.

So Berry had to go back to 2014 during his time with the Colts for a draft in which his team didn’t have a first-rounder. Indianapolis had sent it to the Browns for running back Trent Richardson.

Berry is running the show now and enters next week’s draft without a first-round selection. He sent first-rounders in the next three drafts and three other picks to the Texans last month for controversial quarterback Deshaun Watson and a sixth-round pick in 2024.

Berry doesn’t expect to trade back into the top 32 picks Thursday night.


“It is unlikely, but I do not want to say anything in absolutes because you just never know how situations arise,” he said. “Quite honestly, I would not have expected us to move up last year. We have to be flexible with the situation.”

GM Andrew Berry won’t speculate on when Baker Mayfield trade could happen, if he’ll be on roster after draft

The move last year was for Notre Dame linebacker Jeremiah Owusu-Koramoah in the second round. The Browns sent pick Nos. 52 and 89 to the Panthers for Nos. 52 and 113.

A move back into the first round would cost the Browns a much higher price, and their stockpile of draft picks has dwindled.

They have seven picks entering the three-day marathon, starting with No. 44 in the second round Friday. They have their original picks in Rounds 2-4 (44, 78, 118) and a compensatory third-round pick (99) for Kwesi Adofo-Mensah getting hired as GM by the Vikings.

The rest of the draft is a combination of picks traded and received.

The analytics-driven front office values picks but viewed the trade for Watson as necessary despite him facing 22 civil lawsuits for sexual assault and harassment. After initial announcements of five picks headed to the Texans, the finalized deal included six picks parted with: No. 13 and No. 107 in the fourth round this year, first- and third-rounders in 2023 and first- and fourth-rounders in 2024.

“We have talked a lot about how important we think the quarterback position is and making sure that you have great performance at that spot for sustainable success and sustainable winning,” Berry said. “Players at that spot and players at other premium spots, you will see us get creative for potentially acquiring.”

“There are always surprises every year,” said Berry, who revealed next to nothing about the team’s plans, as is his style. “That is the thing I have gained more patience with over my career because every year you go into the draft thinking it is going to play out in the worst-case scenario. I am not going to lie, sometimes it does.

“The reality of it is, if you polled everyone within our personnel, research and coaching groups about the board, even though we all work together and have organizational priorities and preferences, a lot of those boards would look different if it is like, ‘Hey, OK. You are the one making the call.’ Now multiply that times 32 teams. As much as you think that you can project where players are going to go, and you may have a high degree of accuracy, there is just a lot of variance around it.”

Without a first-rounder the excitement level has dropped among fans — and team headquarters won’t be open to media Thursday — but Berry doesn’t expect the draft to feel much different.

“Maybe Thursday night in terms of the schedule we will potentially handle a little bit differently, but in terms of the intensity and focus for the weekend, that really has not changed,” he said.

This will be Berry’s third draft as general manager. He made two trades each of the last two years during the event, so action can be expected. He just won’t commit to what kind, although the organizational philosophy favors trading down and adding picks.

“We have gone up and back,” he said. “It probably more speaks to our flexibility within the moment.

“Volume is always a good thing.”

Berry said the picks given up in the Watson trade would “not necessarily” handcuff the Browns from moving up in the second round or make them prioritize adding picks in future drafts. They played out the potential scenarios this week.

“We try our best to manage our draft capital as well as we can, but it really just depends on how the board falls and then quite honestly if we receive any calls or get any opportunities that make sense,” he said.

Berry wants to keep the focus on the long term when drafting but admits “certain positional leanings.” He wouldn’t disclose them, but defensive end and receiver have to be at the top of the list, as the team doesn’t have a clear-cut No. 2 at either spot.

End Jadeveon Clowney and receiver Jarvis Landry filled those roles last year but are free agents. Berry said the uncertainty of a potential return by the pair won’t affect the approach to the draft.

Regardless of what scenarios present themselves, Berry won’t be flipping out. He saw “Draft Day” with his wife, Brittan, when it came out and assured her it wasn’t reality.

With Deshaun Watson back to work with Browns, legal process continues in civil lawsuits
Baker Mayfield preparing for next team, next rebound as he’s honored at Oklahoma