Notes: GM Andrew Berry won’t speculate on when Baker Mayfield trade could happen, if he’ll be on roster after draft 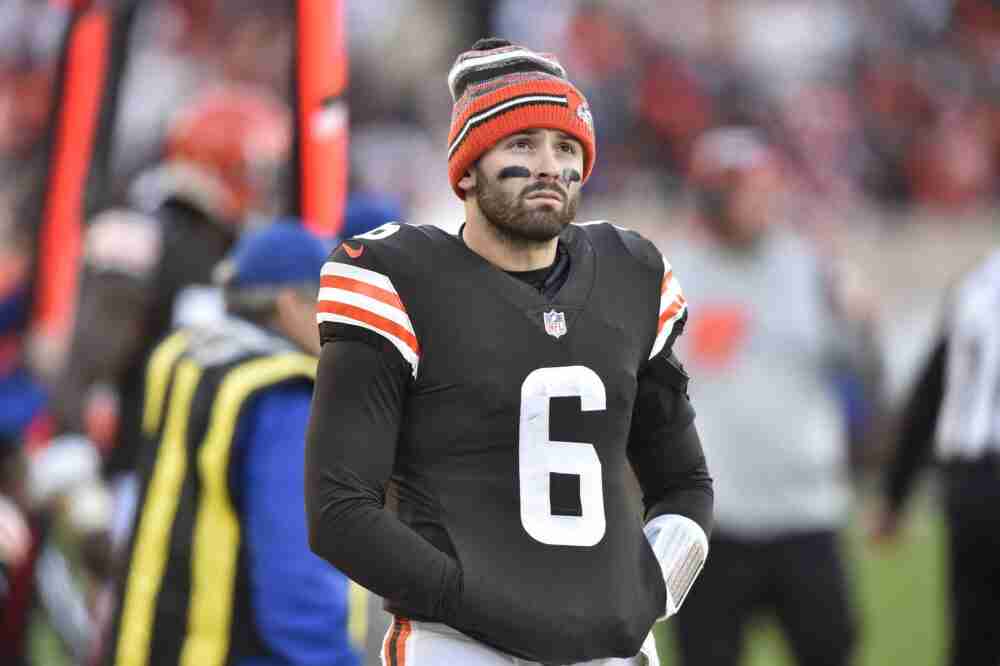 BEREA — Much of the outside attention on the Browns involves when and to whom quarterback Baker Mayfield will be traded.

In Berry’s predraft news conference, he was asked if he expected Mayfield to be on the team following the draft next week.

“I think quite honestly anything regarding speculation on the future, several months out, that’s probably unfair because we realize that circumstances in the NFL change and quite honestly my focus has been on the draft next week, just because we’re inside of a week,” Berry said. “And all those kind of larger roster issues, things that may surface over the next five, six, seven months, (I will) shift my focus after that.”

Berry was tight-lipped regarding Mayfield, the No. 1 pick in 2018 who wants to be traded after the Browns acquired Deshaun Watson last month. The Browns want to trade Mayfield, but the market has been slow. It could heat up during or after the draft, which runs for three days starting Thursday.

“I don’t know that I can predict that necessarily,” Berry said.

NFL Network’s Daniel Jeremiah believes Mayfield, who struggled last season as he played through a torn labrum in his left, non-throwing shoulder, is a better option than anyone if the draft and a team like Carolina would be helped by waiting until it makes a pick or two to deal for Mayfield.

“I guess you could say there’s benefit to not showing your hand in terms of the draft, in terms of what you’re going to do,” Jeremiah said Thursday on a conference call. “I think if the Carolina Panthers made a trade for Baker Mayfield today, I would guess that every general manager in the NFL would say they’re taking a tackle with that (No. 6) pick, so at least it kind of keeps them from showing their hand a little bit if they were to wait.

“I can’t argue with that logic if they were going to try and go get Baker Mayfield, and when I stack Baker up with this class, especially if you’ve got to win games next year, I think I would lean towards Baker on that front.”

Berry wasn’t nearly as talkative. He wouldn’t speculate if Mayfield could be on the roster when training camp starts or if a trade is imminent, and wouldn’t comment when asked if he’s fielded offers. The Browns are expected to have to pay part of Mayfield’s guaranteed $18.86 million for 2022.

“Honestly, I wouldn’t comment on contractual matters,” Berry said. “Look, like I said, we’ll deal with that situation as circumstances evolve.”

Berry did respond to Mayfield’s comment on a podcast last week that he feels “disrespected 100 percent because I was told one thing and they completely did another.”

“I’ve touched on this previously that we were transparent with our intentions with his reps,” Berry said. “That being said, I think we can all understand how Baker feels and sometimes things in the NFL, whether it’s team-related, coach-related, player-related, they may not work out. And Baker is a competitive and driven young man who’s had success as a quarterback and will continue to have success as a quarterback. So definitely understand it.”

The Browns continue to strongly deny accusations from former coach Hue Jackson that he and others in the organization, including Berry, were incentivized to lose. The NFL hired former Securities and Exchange Commission chair Mary Jo White to investigate the Browns, and the review is expected to conclude soon.

“We will continue to cooperate with the investigation, and we are looking forward to having resolution and for them to release their findings,” Berry said. “We feel just as strongly about everything as we did in February.”

White was put on the case in February after Jackson made statements implying the Browns paid him to lose. He backtracked but maintained he and Berry were among those who received bonuses after going 0-16 and 1-15 in 2016 and ’17. The Browns have repeatedly denied Jackson’s accusation.

“Even though Hue recanted his allegations a short time after they were made, it was important to us and to the integrity of the game to have an independent review of the allegations,” a team spokesman said in a statement Monday.

The Browns expect running back D’Ernest Johnson to play for them in 2022.

He was a restricted free agent after a breakout season, and the Browns applied the low tender worth $2.433 million in March, giving them the right to match if Johnson agreed to a contract with another team. The deadline for Johnson to sign elsewhere was Friday.

“D’Ernest is a good player. We anticipate him being here,” Berry said.

Johnson made $850,000 last season, when he rushed 100 times for 534 yards and three touchdowns. He had totaled 187 yards and no touchdowns in his first two seasons.

He’s third on the depth chart behind Nick Chubb and Kareem Hunt.

The Browns signed veteran Jacoby Brissett to back up Watson knowing Brissett might have to start a chunk of the season if Watson is suspended by the league following its investigation of 24 sexual misconduct allegations.

“Backup quarterback for us will always be a priority just because of the way that the performance of that position goes often times defines your season,” Berry said. “Just like you want to be insulated, whether it is for injury or lack of availability at other positions, it really is the same thing at quarterback.

“Jacoby is an individual who is very talented, he is seasoned, he has played in a number of different offenses and he has been called into action in several situations and several unique situations and has performed well. He is a guy who we were excited about going into the spring, and we were fortunate enough to acquire him.”

The Browns traded for No. 1 receiver Amari Cooper because he knows how to get open.

“Amari is one of the best route-runners in the NFL, and it is not just like a particular route that he can separate on but just really the diversity of ways that he can get open,” Berry said. “He just has a really good feel for separating, whether it is laterally at the top of routes or even vertically. I think that is something that really stands out about his game.

“He has fantastic hands, as well. Catches the ball really well and has been productive for a long time in the NFL.”

Berry’s wife, Brittan, spilled the beans on Berry’s childhood fascination with the salary cap, tweeting a picture this week of Berry’s notes as a 10-year-old.

“This is what I get for having my wife visit her in-laws on Easter weekend,” he said. “There is some truth to that. We got a Christmas gift one year — me and my brother — it was like a foosball table, but this was like a hockey table. We developed our own league and that type of thing and built out schedules, rosters and everything like that. Totally nerdy of me. Thank you, Brittan, for outing me on that.”