Commentary: Drafting Baker Mayfield seemed like a good idea at the time 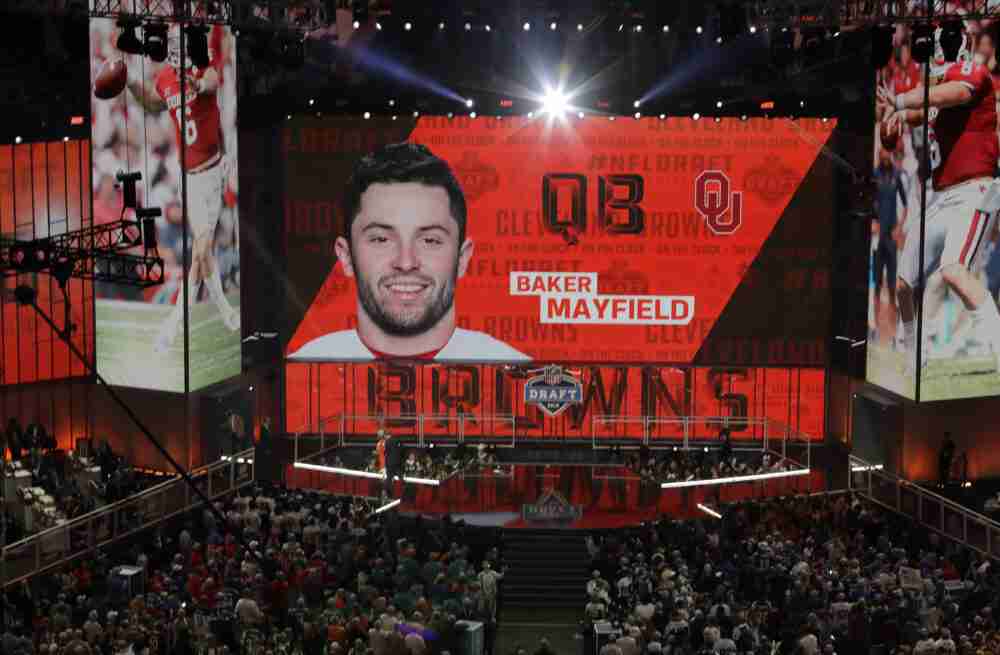 Welcome to the fourth anniversary of the best day of Baker Mayfield’s professional career.

Coincidentally, it’s also one of the worst days of his in-limbo career.

But at least he has his statue. Unfortunately for him, it’s not in Cleveland, and neither is he — technically.

Technically, Mayfield is still a member of the Browns. But they don’t want him, he doesn’t want them, and all that fuzzy feel-good from four years ago tonight, when Roger Goodell announced, “With the first pick of the 2018 NFL Draft, the Cleveland Browns select quarterback Baker Mayfield,” has gone fluttering off into Futilityville, which is where, for way too long, the best laid plans of the Dawg Pound’s favorite team invariably expire.

But then all kinds of stuff started happening, none of it good, and instead of waking up feeling dangerous, Mayfield woke up feeling discarded.

After the Browns’ 2021 season crashed and burned, the team staggered into now-what-do-we-do-ville, and one of the first wink-wink declarations by General Manager Andrew Berry was: “We fully expect Baker Mayfield to be our quarterback next season.”

Veteran observers of professional sports executive-speak heard that for what it was, which was code for: “But if we can win the Deshaun Watson sweepstakes, all bets are off.”

Browns owner Jimmy Warbucks then made Watson an offer he couldn’t refuse, and that made Mayfield a quarterback the Browns couldn’t use.

Operating on the premise that, on the whole, they would rather not pay their backup quarterback the nearly $19 million called for in his contract, Browns officials, since the Watson signing, have woke up feeling nervous.

Because in trying to trade Mayfield elsewhere, the Browns have virtually no leverage at all. Every team knows the Browns desperately need to divest themselves of the first player selected in the 2018 draft. Worse yet for Cleveland: the Browns need to get Mayfield off their books more than any NFL team wants, or needs, to get the Oklahoma Kid ON their books.

The worst-case scenario for the Browns: their change in quarterbacks could cost the franchise as much as almost a quarter of a billion dollars: the $230 million called for in Watson’s contract, and the nearly $19 million owed Mayfield this year.

It’s also very likely that other NFL owners weren’t thrilled that the Browns, with the contract they gave Watson, blew out of the water the price tag for elite quarterbacks.

Hence, the reluctance to cut Cleveland any slack in any negotiations over a potential trade for Mayfield. The Browns obviously would like the acquiring team to take on as much as possible of the nearly $19 million owed Mayfield in 2022.

Teams of interest, in turn, probably aren’t willing to cut Cleveland much slack on that, especially given that everyone knows the Browns, failing a trade, will likely be forced to release Mayfield, and cover themselves the full amount due him for 2022.

Such is life between a rock and a hard place.

In the meantime, it seems, the Browns will wait for a best offer that, for multiple reasons, may never come.

Tonight’s NFL Draft offers a convenient reminder of the high-stakes at stake for teams looking for shortcuts in team building. It also, being the fourth anniversary of the night a certain NFL team felt a certain quarterback from Oklahoma was its long-sought Mr. Right, is a cautionary tale about how everything can still go so wrong even when everything feels so right.

That the Browns are in the middle of it should not be a surprise. The good news is they have experience in these sorts of entanglements.

For us commoners on the sideline, it’s particularly timely, since it gives us something to ponder during tonight’s draft, in which there will be 43 players selected before the Browns make their first pick, forfeiture of multiple picks, including multiple first-rounders, being the going rate for a $230 million franchise quarterback.

It would also be to everyone’s benefit if Berry & Company could use the draft as sort of a one-stop shop to perhaps additionally orchestrate a Mayfield trade, and to drop the curtain, once and for all, on that particular bit of awkwardness.

Failing that, then maybe they keep the “for sale” sign on Mayfield until the inevitable quarterback injuries begin to reveal themselves in training camp, which could scare up a buyer.

Or maybe Browns’ ownership tires of the whole exercise and, at some point, simply cuts Mayfield, gives him a check, and calls it a day.