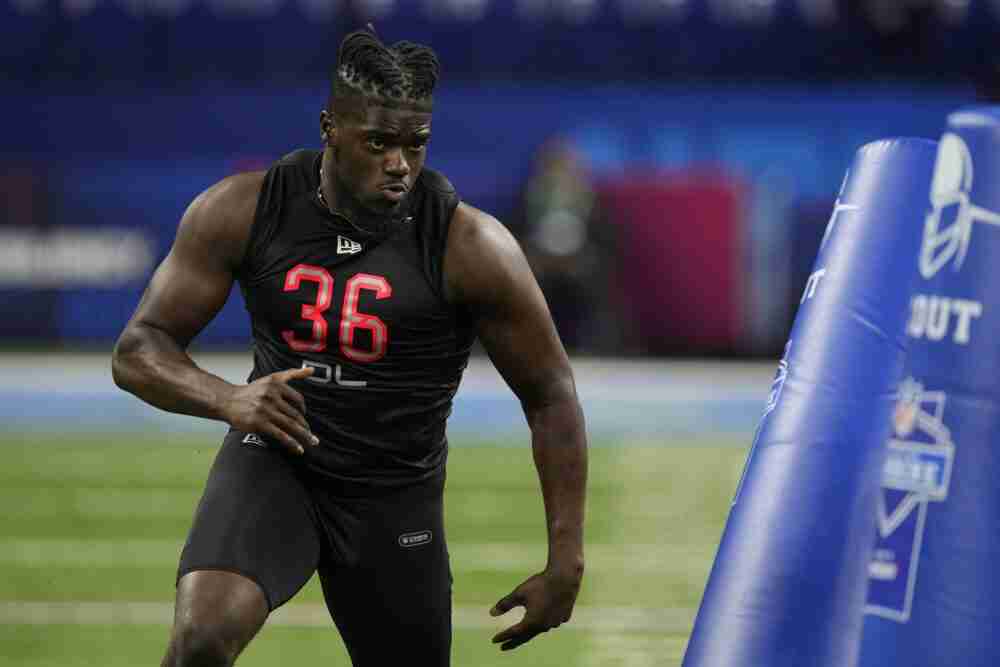 Q: GM Petrak, who is on your wish list with those first two picks on Friday?

A: My wish list? The best talkers with the best stories.

If I’m the Browns, I’d go with Michigan defensive end David Ojabo and Alabama receiver John Metchie III. I’m not sure Ojabo will be on the board at No. 44, or Metchie at No. 78, but there’s a chance for both.


Nick Saban says Alabama WR John Metchie III has “some dog in him,” is internally motivated to succeed

I love Ojabo’s upside and appreciate the only reason he could possibly be available into the second round is the torn Achilles suffered at the pro day in March. He’s a freak athlete who’s still learning the game after a late transition to football. Minnesota’s Boye Mafe and USC’s Drake Jackson are other attractive options at end.

Browns left in unusual situation: No draft pick, but still trying to resolve a QB situation

Metchie wouldn’t be my pick at receiver at No. 44, but I prefer the end-receiver combo than receiver-end. Metchie’s coming off a torn anterior cruciate ligament in December but expects to be ready by Week 1. If the Browns take a receiver at No. 44, Western Michigan’s Skyy Morre, North Dakota State’s Christian Watson and Georgia’s George Pickens top my list.

Q: Will Mr. Haslam and his Browns organization suffer any significant blowback for displeasing NFL owners?

A: I don’t think so. I have no doubt at least a few owners ripped the Browns privately and to each other after Cleveland gave Deshaun Watson a fully guaranteed five-year, $230 million contract. It has the potential to change how future contracts are negotiated, especially for quarterbacks. But the owners as a group must realize guaranteed contracts for the best players were only a matter of time, especially with the stars gaining leverage every year. So I don’t think the repercussions for the Browns will be noteworthy.

I will leave room for a short-term exception. I’m not a conspiracy theorist, but part of me wonders if the nonexistent trade market for Baker Mayfield is at least in part a reaction to the Watson contract.

This too shall pass.

Commentary: Drafting Baker Mayfield seemed like a good idea at the time

Q: How do you think the Browns will do this season? What do you think of the signing of Deshaun Watson and do you think Denzel Ward’s record-setting contract was a wise idea?

A: A potential suspension of Watson could have a big impact on how the Browns fare. But if we use the assumption of a six-game suspension, I could see the Browns going 9-8 or 10-7 and contending for a playoff spot, depending on how quickly Watson returns to playing at a high level after more than a year on the sideline.

As I’ve written, I didn’t approve of the trade for Watson. I can’t dismiss the 24 accusations of sexual misconduct and wouldn’t have chased him. From a football perspective, the deal was a no-brainer. He gives the Browns the chance to compete in a stacked AFC.

The Ward contract — five years, $100.5 million — was a logical move. He’s one of the best in the league at a premium position and was entering the last year of his rookie contract. No. 1 corners are tough to come by, so the Browns did the right thing by holding onto theirs.

Q: Regarding the latest signing, wide receiver Javon Wims. Don’t be surprised if he is one of this year’s top attempted reclamation projects. He checks two boxes important to the current front office. First, he went to Georgia. Second, he was highly regarded by PFF when drafted. Rated the 99th player overall, went 98th in their last mock draft that year. As you probably have noticed, this analytics-driven front office often likes players that PFF likes. There have been very few draft picks made by the current regime that are a total deviation from PFF’s ranking. Whether they use the same models or not, there seems to be a high correlation. Your BrownsZone.com is a go-to source for me. Thanks and keep up the good work.

A: Thanks for the kind words. They’re appreciated.

You’re right about the Pro Football Focus connection, so your points about Wims are well-taken. He was a seventh-round pick of the Bears in 2018 and has 28 catches in 33 games, including seven starts. He’s not guaranteed a roster spot but enters a competition at the bottom of the receiver depth chart that includes Demetric Felton and Ja’Marcus Bradley.

Q: Was defensive end Porter Gustin tendered as a restricted free agent? I ask because Friday at midnight was the deadline for him to receive competitive offers. If he was not, he becomes unrestricted, right?

Otherwise, the team has 10 D-linemen under contract. Though this does not mean all will make the club, 10 is typically how many are carried. Might the activity suggest the organization knows Jadeveon Clowney is not returning?

A: The Browns didn’t tender Gustin as a restricted free agent, making him unrestricted from that point forward. He hasn’t signed with anyone.

I wouldn’t read too much into the recent moves along the D-line — signing Stephen Weatherly and Isaac Rochell and re-signing Sheldon Day –except that they provide insurance and flexibility. A Clowney return hasn’t been ruled out and wouldn’t be even if the Browns draft a defensive end with the No. 44 pick. But the Browns can’t count on him coming back and must cover their bases.

Q: So is D’Ernest Johnson officially back on the Browns roster, since apparently he was not offered a contract by any other NFL team by last week’s deadline?

A: He must sign his tender to officially return, and that hasn’t shown up on the league’s transaction wire. But with the deadline for another offer passed, he must sign the tender if he intends to play this year, and general manager Andrew Berry said last week he expected him to return.

Mailbag: Is there any concern that Deshaun Watson hasn’t played in so long?
Mailbag: Would Andrew Berry really keep Baker Mayfield all season?