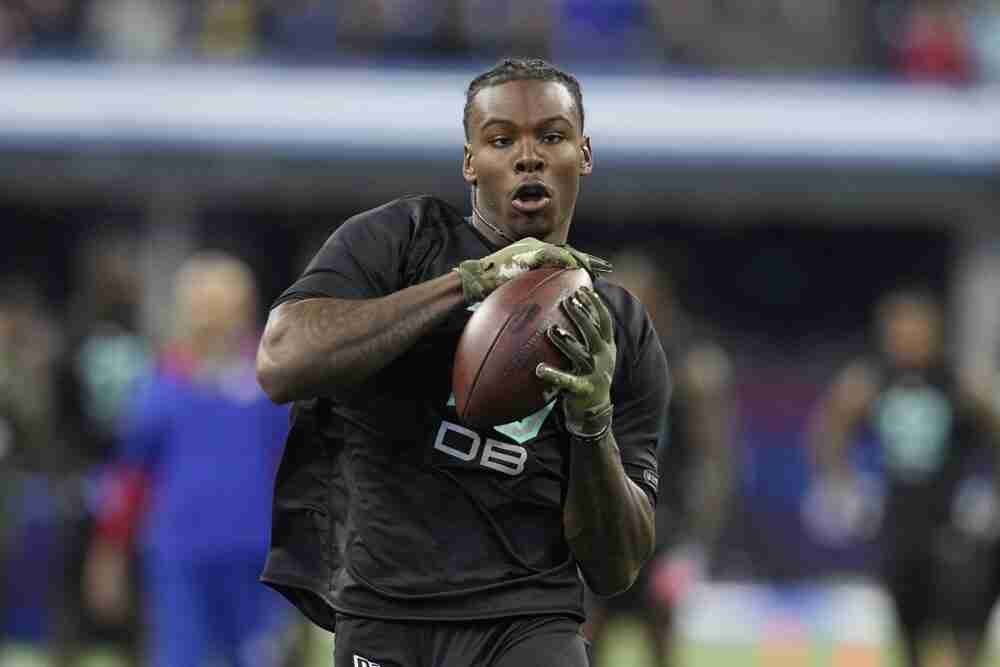 BEREA — The Browns got used to not making a draft pick.

Then they got busy.

And even got a receiver.

The Browns didn’t have a first-rounder Thursday night after trading it to the Texans in March as part of the blockbuster deal for controversial quarterback Deshaun Watson. While they were on the clock Friday, the Browns traded out of the second round, sending pick No. 44 to the Texans for No. 68 in the third round and Nos. 108 and 124 in the fourth round.


Commentary: A boring draft day is actually a good thing for Browns

After the long wait, general manager Andrew Berry really went to work in the third round.

The first pick finally gave fans something to talk about — like what a surprise it was.

Emerson, who ran a 4.51-second 40-yard dash, was projected as a fifth-round selection by The Athletic’s Dane Brugler. Emerson adds to a position of strength rather than address a weakness, like the hole at No. 2 receiver.

“You can never have enough corners,” coach Kevin Stefanski said. “Organizationally we value those players.”

The Browns recently gave No. 1 corner Denzel Ward a record contract extension of five years and $100.5 million, and they drafted Greg Newsome II with the No. 26 pick a year ago. They also have nickelback Troy Hill and 2019 second-rounder Greedy Williams.

“It’s exciting, just going in with those guys,” Emerson said on Zoom. “I bring a little size, bring some physicality. I’m going to bring everything I got.”

Wright played outside linebacker in UAB’s 3-4 scheme but will move to end in the Browns’ 4-3 and they feel he has the versatility to slide inside in pass rush situations. In three seasons he had 12.5 sacks, 19 tackles for loss, three forced fumbles and five passes defensed.

“What we do love about him is he’s big, he’s long, he’s physical,” vice president of player personnel Glenn Cook said. “He’ll definitely come in and contribute in the run game right away and then we can kick him inside and that will help us out on third down.”

Fans had been clamoring for two nights for a receiver, and Berry finally made it happen at the end of the third round. Bell (6-1, 212) was an All-American and Big Ten receiver of the year. He ran a slow 40 time (4.65) but was highly productive, catching 232 passes for 2,935 yards, a 12.7 average and 21 touchdowns in three seasons with the Boilermakers.

All the moves were made while the buzz grew surrounding a potential trade of quarterback Baker Mayfield.

Then it quickly quieted.

The Browns and Panthers reportedly talked trade throughout the night, but when a deal wasn’t reached, Carolina traded into the third round to draft Mississippi quarterback Matt Corral at No. 94. That likely erases the possibility of Mayfield heading to Carolina. Yahoo’s Charles Robinson reported they couldn’t come to terms on how to divide the $18.86 million Mayfield is guaranteed in 2022.

With Kenny Pickett the only quarterback taken through two rounds — by the Steelers at No. 20 — other teams could decide Mayfield is the better option than a rookie. The Seahawks, who’ve been mentioned as a possible landing spot for Mayfield, had pick Nos. 40 and 41 but went with Minnesota edge rusher Boye Mafe and Michigan State running back Kenneth Walker III.

The Titans traded into the third round to take Liberty quarterback Malik Willis at No. 86. The Falcons removed themselves from the Mayfield discussion by drafting Cincinnati’s Desmond Ridder at No. 74, the second quarterback selected.

The list of possible trade partners for Mayfield continues to dwindle.

The Browns entered the draft with their biggest needs at receiver, defensive end and defensive tackle. They had plenty of quality options at No. 44 but preferred the extra picks and eventually addressed receiver and end.

Among the top receivers available at No. 44 were Western Michigan’s Skyy Moore, Georgia’s George Pickens and Cincinnati’s Alec Pierce. The Texans used No. 44 from the Browns to select Alabama receiver John Metchie III, who got rave reviews from coach Nick Saban.

Nick Saban says Alabama WR John Metchie III has “some dog in him,” is internally motivated to succeed

The Patriots selected Baylor’s Tyquan Thornton at No. 50, the Steelers took Pickens at No. 52, the Colts got Pierce at No. 53 and the Chiefs grabbed Moore at No. 54.

At defensive end, Michigan’s David Ojabo and USC’s Drake Jackson seemed like the top targets if the Browns stayed at No. 44 and wanted a No. 2 to pair with All-Pro Myles Garrett.

The AFC North rival Ravens selected Ojabo at No. 45. He’s got a lot of potential and likely would’ve been a top-15 pick, but his Achilles tendon tore in March at his pro day. He would’ve been an interesting pick for the Browns, as he could’ve learned from and eventually teamed with Garrett for years.

Jackson went to the 49ers at No. 61, seven before the Browns finally made their first pick. And Oklahoma edge rusher Nik Bonitto was taken by the Broncos at No. 64.

Cleveland’s organizational philosophy is more picks are better due to the high miss rate, and the Browns had seen their stockpile reduced in trades, including the Watson deal that sent a net of five picks to Houston, including a first-rounder in each draft from 2022-24.

The Browns also could’ve seen their guy taken Friday in the 11 picks before No. 44.

Tampa Bay started the second round by picking Houston defensive lineman Logan Hall at No. 33, the Packers traded up to take North Dakota State receiver Christian Watson at No. 34, the Falcons traded up to No. 38 to draft Penn State defensive end Arnold Ebiketie and the Giants took Kentucky receiver Wan’Dale Robinson at No. 43.

“The truth is, you fall in love with a lot of players during this draft, there are some great football players out there and you wish you could have all of them, but I thought Andrew and the crew here did a great job of staying true to the board,” Stefanski said. “Make sure that we can add value later, add players that we feel like can have impact this season and really beyond.”

NFL Draft 2022: Quiet first night for Browns, but Panthers pass on QB, keeping them in mix to trade for Baker Mayfield
Trade with Panthers doesn’t happen, but Andrew Berry says Browns will “feel fine” if Baker Mayfield’s still on roster after weekend