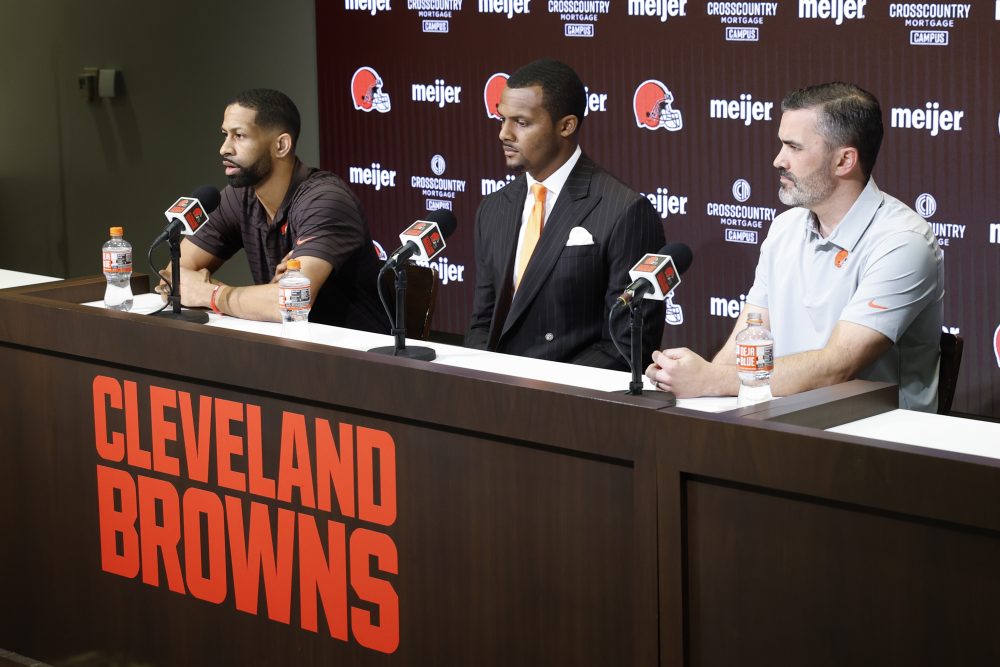 BEREA — The Browns handled the NFL Draft like a team that believes it has a Super Bowl roster.

They had already traded their first-round pick in March for Pro Bowl quarterback Deshaun Watson. Then they started their draft Friday by trading the second-round pick for extra picks. Their first selection came in the third round and was used on Mississippi State cornerback Martin “MJ” Emerson.

Cornerback wasn’t on the list of needs, and Emerson isn’t guaranteed a spot in the rotation. But general manager Andrew Berry looked at the draft board and went with best player available.

No need to force someone at a position of weakness. No need to artificially stack the board to favor a receiver or defensive end. No need to panic.


Commentary: Baker Mayfield still on roster after draft, and that’s starting to be a problem for Browns

That’s how the teams with the best rosters approach the three-day marathon of the draft.

The Browns entered with seven draft choices, made three trades, drafted nine players — four on offense, four on defense and the top kicker — and added fourth- and fifth-round selections in 2023.

“We are really pleased with how we are coming out of the weekend, but the reality is no roster is perfect, our roster is not perfect and we are going to continue to look for opportunities to improve it,” Berry said.

They’ve thrown numbers at the problems at No. 2 receiver, No. 2 defensive end and defensive tackle rather than adding star power. Their depth is thin at tackle behind starters Jedrick Wills Jr. and Jack Conklin, and Wills needs to play much better at left tackle than he did a year ago. They’re trusting David Njoku and Harrison Bryant at tight end.

“Years ago, we were drafting rookies so they could come play on our team because we had holes on our team,” said DePodesta, who joined the franchise in 2016. “We wanted to get to a point where we were drafting players who were going to have to compete for any kind of playing time at all. I think that is where we have gotten to now. These guys are going to have to come in and compete.”

Part of the news conference was spent questioning what they’d do with the surplus of running backs after taking Cincinnati’s Jerome Ford in the fifth round. They had the same issue at cornerback before trading nickelback Troy Hill on Saturday.

“Those are first-world problems, right?” DePodesta said. “That is what we wanted to try to create and what we have been trying to create for years. In that sense, yeah, it feels different than it did once upon a time, but I think we felt that building and building over the last couple of years.”

The most pressing questions about the Browns aren’t about talent.

Two are about Watson’s character and possible suspension as 22 civil lawsuits alleging sexual misconduct continue. From a football perspective, the Browns entered the draft with their starting quarterback situation settled, something many teams in the league couldn’t say.

The others are about the future of displaced and disgruntled quarterback Baker Mayfield and how much more of a distraction he could become over the next few months. He wasn’t traded during the draft as hoped, and at least a few potential interested parties solidified their quarterback depth charts, including Carolina and Atlanta.

Berry refuses to provide any insight on how the frustrating situation will play out, sidestepping questions about if the Browns will have to wait until the summer to see if a need develops for a team, and if they can tell Mayfield to stay home from mandatory minicamp June 14-16, the next time he’d be expected in Berea.

“It’s fluid and we’ll deal with it as circumstances change accordingly,” Berry reiterated.

The Browns aren’t crowning themselves a Super Bowl favorite, especially coming off a thoroughly disappointing 8-9 season, but the oddsmakers expect them to be in the mix, lowering their odds last week. That seems premature given the quarterbacks and overall talent in the AFC and not knowing if, when and for how long Watson will be suspended.

But there’s plenty to like about the Browns, including how they handled the draft.

They eventually addressed needs at receiver, defensive end and defensive tackle with players who fit their schemes. They took big-legged LSU kicker Cade York, grabbing him in the fourth round to make sure they got him. They restocked their depleted piles of draft picks this year and next after trading a net of five picks from 2022-24 for Watson. They have eight picks next year.

“We are very happy about the additional draft resources, both this year and next year, that we were able to accumulate,” Berry said.

The trade down from No. 44 netted Oklahoma defensive tackle Perrion Winfrey (No. 108) and York (No. 124) in the fourth round.

A busy Saturday began with Winfrey. He’s a ball of energy, barked throughout his Zoom interview and promised to “kill right away” next to All-Pro end Myles Garrett.

Winfrey was one of three defensive linemen drafted — UAB end Alex Wright in the third round and Oklahoma end Isaiah Thomas in the seventh. Berry took three Sooners on Saturday — Winfrey, Thomas and sixth-round receiver Michael Woods II — and was unable to trade the most famous of all (Mayfield).

“It just happens to be an interesting coincidence,” Berry said of the Oklahoma preference.

Fans were desperate for a receiver heading into the draft and may not be satisfied coming out of it.

The Browns drafted Purdue’s David Bell (No. 99) and Oklahoma’s Michael Woods II (No. 202) but don’t have a sure thing at No. 2 receiver behind Amari Cooper. The Browns like the idea of Bell in the slot, leaving Donovan Peoples-Jones and Anthony Schwartz as the likeliest options to start outside in three-receiver sets unless a veteran is added.

“The different characteristics that each guy brings, I think collectively it is a really, really nice room,” DePodesta said. “We feel like the room can sort of do everything.

They feel that way about the majority of the roster, and this weekend only helped.

Commentary: Baker Mayfield still on roster after draft, and that’s starting to be a problem for Browns
Analysis: With gaps at wide receiver and defensive line, did Browns do enough in draft?