Commentary: Baker Mayfield still on roster after draft, and that’s starting to be a problem for Browns 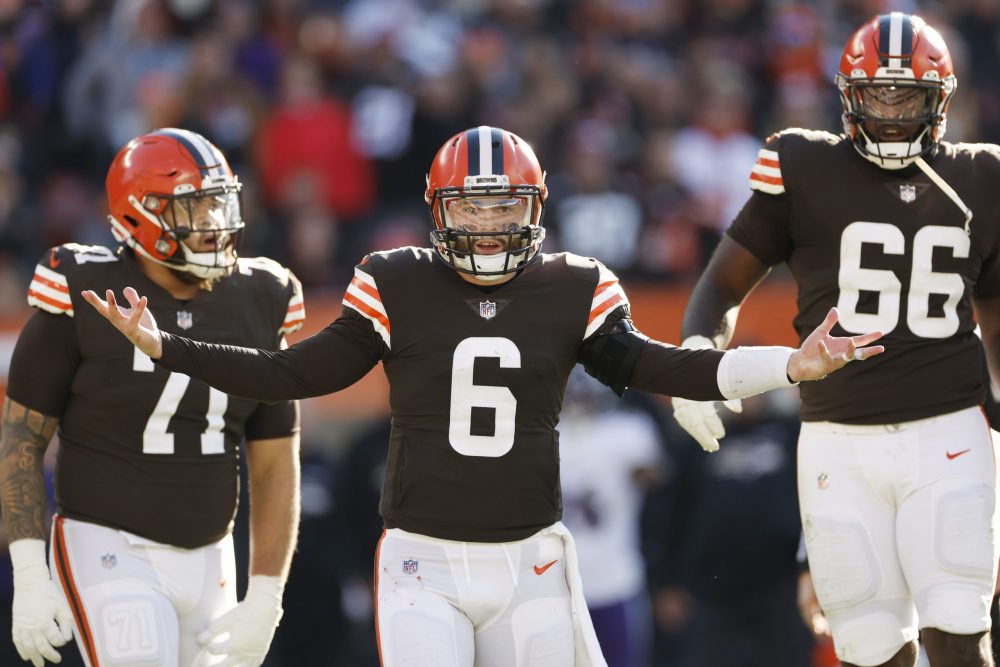 I don’t know about you, but I don’t want to hear the phrase “The pick is in” for at least the next six months.

All the picks are in, mercifully, and the NFL Draft is finally over. It’s time for us to get on with our lives.

It’s also time for NFL executives to go back into their bunkers and begin preparing for the coming season.


For the Browns, moreover, it’s time for them to address, once and for all, the elephant in the room.

Because if they don’t, they could be flirting with a Mayfield in the room, the locker room, and that’s not something that anyone wants to deal with, hear about or contemplate — with the possible exception of Baker Mayfield himself.

The Baker Brouhaha is looming on the horizon for the Browns, the league and for acrimony aficionados everywhere.

But it shouldn’t be this hard, should it?

Well … um, apparently, yes. It should be this hard — and ugly is in the on-deck circle.

As celebrity breakups go, this probably doesn’t rise to the level of J-Lo and A-Rod. But by the standards of that old bromide, “There is no wrath like a first overall pick scorned,” this one has cage-rattling possibilities.

That’s why it’s incumbent on the Browns, who are clearly the engine running — or not yet running — the terms of disengagement, to now become the aggressor; to bring this pimple to a head and pop it.

The longer it goes, the less each side wins.

It’s a pretty simple case, really. It’s just a matter of when Baker changes teams, and which team acquires him. It’s the making-it-happen part that seems to be the current sticking point.

On the leverage meter, the Browns sit at the bottom of the pile because they need Mayfield gone more than another team needs Mayfield.

Even Mayfield has more leverage than the Browns. That’s because His Bakership holds an ominous trump card. The Browns’ OTAs start at the end of May and Mayfield’s trump card would be this: He shows up for the OTAs.

Talk about a wolf in the henhouse. Mayfield’s on-again/off-again relationship with the media would, in this case, be gleefully on again. It wouldn’t take much, if any, prodding from reporters for Mayfield to give his side of the divorce, warts and all.

If that potential scenario isn’t enough to accelerate the Browns’ search for a Mayfield trade partner, then maybe the next checkpoint would.

That would be the mandatory minicamp in June. If Mayfield is still on the roster at that time, he MUST show up in order to avoid losing out on his guaranteed money. Talk about a potential circus.

Mayfield could also use that media session with reporters at minicamp to again heat up his blast furnace by reprising his OTAs soliloquy of sorrow.

Let’s just say that, from this point forward, the spurned quarterback holds all the cards in this football annulment. In 2022 Mayfield will be paid almost $19 million, even if he fails to take a single snap from center.

Publicly, Browns officials will say there is no deadline for dealing their dead-end kid. That’s true only if you believe that the ongoing sideshow caused by the continued presence of the not-yet gone quarterback would not be a distraction.

The Mayfield market seemed to shrink by at least one team during the draft, when the Carolina Panthers selected Ole Miss quarterback Matt Corral. The Seattle Seahawks seem like a potential Mayfield landing spot. Or the Browns may have to eventually try to romance teams in need of a backup quarterback, which Mayfield’s time in Cleveland may or may not have proven to be his ultimate, long-term role.

Indeed, instead of bringing clarity to the stable of teams that might have a need for Mayfield’s services either as a starter or backup, the draft instead made the landscape foggier still.

That hurts rather than helps the Browns’ cause. They need, as soon as possible, a clean break from the past and a clear launching of the future of the quarterback position in Cleveland.

That can’t happen with unfinished business getting in the way.

Because for the Browns, at the quarterback position, the pick isn’t in until Mayfield is out.

Commentary: A boring draft day is actually a good thing for Browns
Analysis: Patient approach, “first-world problems” reflect an organization that likes where it is