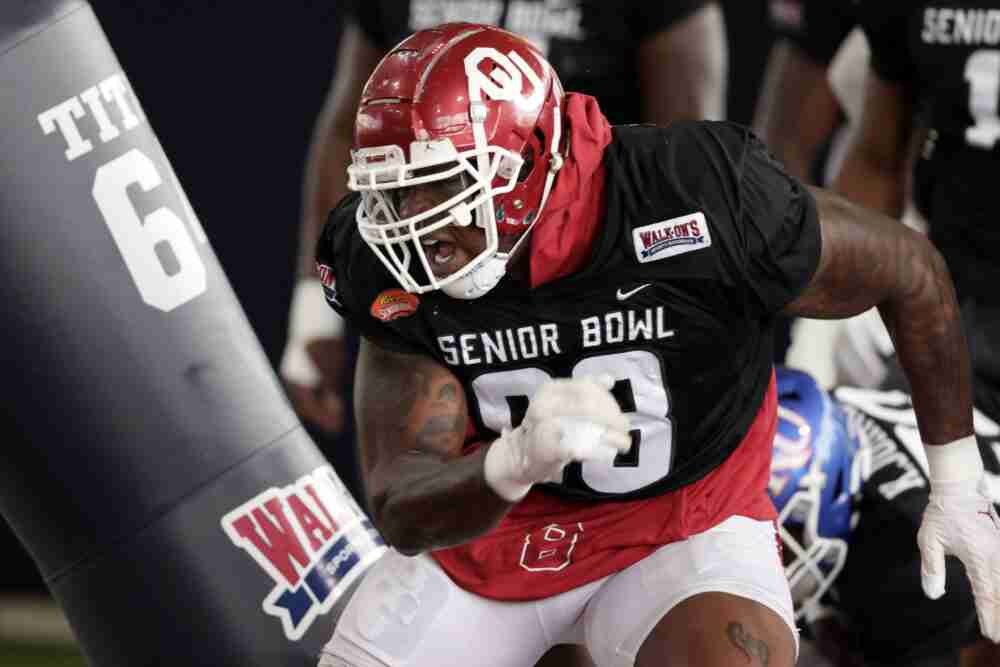 BEREA — After an impressive, and maybe somewhat unconventional, college career, Perrion Winfrey expected to be chosen earlier in the NFL Draft.

When he finally found his landing spot in the pros, he called his Day 3 selection a needed “wake-up call.”

“This gave me all the fuel and all the fire I needed to come into the league and dominate, so I wouldn’t change a thing,” he said via Zoom on Saturday during the final day of the draft.

Commentary: A boring draft day is actually a good thing for Browns


Winfrey, a defensive tackle out of Oklahoma, was selected by the Browns in the fourth round as the No. 108 pick, and seemingly had all the fuel he’ll need just minutes after finding out he was heading to Cleveland.

The Browns’ newest defensive lineman fills a big need on the interior and has an unquestionable passion, which no doubt factored into the decision to draft him. But part of what attracted the Browns to Winfrey was the steady improvement over his college career, particularly in his time at Oklahoma.

Winfrey was a three-star defensive tackle recruit out of Lake Park High School in Roselle, Ill., a suburb of Chicago. He began his college career at Iowa Western Community College after academic concerns kept the Division I offers few and far between.

Another good video from new #Browns DT Perrion Winfrey about playing with “juice.”https://t.co/Ji4rBTBOEj

Winfrey made the most of his time in the junior college ranks, posting 27 tackles (10 tackles for loss) and four sacks as a freshman. As a sophomore, he had 28 tackles (13 tackles for loss) and 5 1/2 sacks, making him the No. 1 overall junior college recruit in 2020. He received offers from Alabama, LSU, Penn State, Texas and plenty others before deciding on Oklahoma.

“I’m a JUCO baby like Aaron Rodgers,” Winfrey said. “It turned me up another notch. It brought me to a place that I probably would never have been able to go to if I had not gone to JUCO. It just let me know that there is always going to be adversity in your life and what are you going to do to let that adversity shape you? Are you going to let it shape you in a positive way or a negative way? That adversity shaped me in a positive way.”

He took that learning experience straight to Oklahoma, where he made an immediate impact. In eight games in 2020, Winfrey had 19 tackles (six tackles for loss), a half-sack, three pass deflections and a blocked field goal. In his final season, he started all 12 games played and recorded 23 tackles (11 tackles for loss), 5 1/2 sacks and a forced fumble.

He opted out of Oklahoma’s bowl game and accepted an invitation to the Senior Bowl, where he was named MVP.

“When evaluating Perrion, you saw all of the traits on tape,” director of player personnel Dan Saganey said. “You saw him improve over his time at Oklahoma. … Your next questions is, ‘OK, is he going to continue to improve and ascend in that (Senior Bowl) environment?’ … As soon as you get to (the) Senior Bowl, (Winfrey) is a guy who you can see his teammates kind of rally around him and he was the energy guy on their team.

“Those are all things that we are looking to add intangibly whenever we can with a player. It is a nice addition to a guy with a really quality skill set for our scheme and our system.”

Saganey said Winfrey’s playing style is a great fit, calling him an “up-the-field, penetrating player,” what they look for in the three-technique tackle. He added that Winfrey also can be effective as a nose tackle who is going to get off the ball and chase.

“You are going to get all of the same production,” Saganey said. “He plays with violence. He plays with quickness, speed and power. … He really kind of checked those boxes that we wanted.”

Winfrey began nearly every response during his post-draft interview with an emphatic bark, clearly overjoyed to be joining the Browns defense with Garrett and close friend Greg Newsome II, who texted Winfrey on Friday and said: “I want you to be a dawg.”

When asked what he brings to Cleveland, he simply said: “A dawg mentality.”

“I am coming in to kill right away with my boys. I am lined up next to Myles Garrett, the best defensive end in the game. We are fixing to take this over. It is over with. I am going to come in and work every single day until I can’t work anymore. They will feel me every single day. I am going to give it my all on and off the field. Anything that is a negative in my game, I will turn it into a positive by the beginning of the season.”