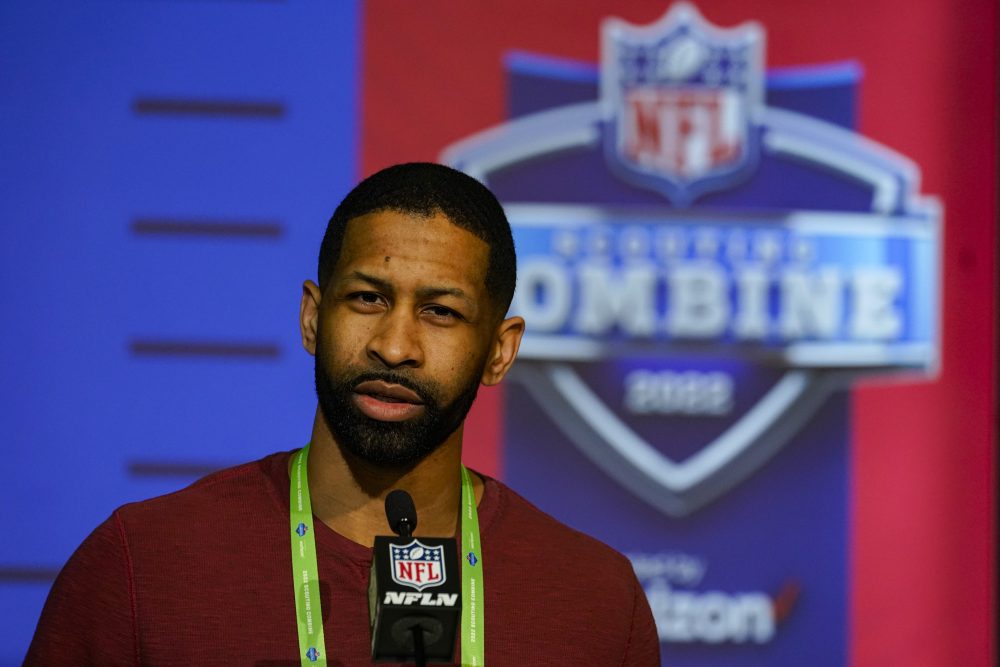 BEREA — The likelihood the Browns will still have Baker Mayfield on the roster when the draft is over jumped late Friday night when the Carolina Panthers traded into the third round to take Mississippi quarterback Matt Corral with the No. 94 pick.

The Browns and Panthers reportedly talked trade throughout the second night of the draft but couldn’t reach an agreement. The selection of Corral, along with Sam Darnold and his guaranteed $18.86 million contract already on the roster, seemed to eliminate Carolina from contention.

Panthers general manager Scott Fitterer stopped short of ruling out a deal Friday night but seemed content with his quarterbacks.


“I’d never put an absolute on anything,” he told reporters. “We came into this weekend with the intention of adding a quarterback, and that’s what we did. I think we’re really happy with the group we have and we’re gonna go with this group.”

The Browns want to trade Mayfield, who’s eager to be dealt, after acquiring Deshaun Watson in a blockbuster deal and remaking the rest of the quarterback room by signing Jacoby Brissett and Josh Dobbs. But Berry said the team would be OK if Mayfield doesn’t get traded this weekend.

“We’ll feel fine,” Berry said after the conclusion of the third round, which saw him make his first three picks of the draft. “It’s something we’ll deal with day to day. The focus is really on the players that we can add to the team and we’ll deal with that situation as it progresses.”

He wouldn’t admit to being disappointed the deal didn’t get done with Carolina.

“No, what I would tell you is probably what I told you beforehand, that’s a fluid situation and we’ll deal with it day to day,” Berry said. “My focus has really been on the guys that we acquired, the guys who are going to be rookie players next fall.”

Yahoo’s Charles Robinson reported the talks between the Browns and Panthers stopped after they couldn’t agree on how to divide Mayfield’s $18.86 million guaranteed contract for 2022.

“I wouldn’t comment on any speculation in that regard,” Berry said.

The Browns have wanted to move Mayfield since trading for Watson on March 18. There hasn’t been much of a market, and it could dwindle further after the draft.

The Falcons removed themselves from the Mayfield discussion by drafting Cincinnati’s Desmond Ridder at No. 74. He was the second quarterback picked after the Steelers took Pitt’s Kenny Pickett at No. 20. The Titans traded into the third round to take Liberty quarterback Malik Willis at No. 86.

The Seahawks, who’ve been mentioned as a possible landing spot for Mayfield, appear to still be in play. They had pick Nos. 40 and 41 but went with Minnesota edge rusher Boye Mafe and Michigan State running back Kenneth Walker III.

“Our focus is really what we’re going to do with our own picks, not necessarily what other teams are doing in the quarterback market,” Berry said. “We’ve got enough to think about on Day 2 with the number of picks we had and the move we made so that was really our focus.”

The situation with Mayfield has many difficult layers. The Browns don’t want him, he doesn’t want to stay, he’s coming off a season of injuries and struggles and is guaranteed a lot of money.

“I wouldn’t say it’s any more challenging than really a lot of situations that cross a general manager’s desk,” he said. “And I would say over the past 2½ years, we’ve all dealt with a number of unique ones, starting with the pandemic. So it comes with the territory in terms of dealing with different roster situations. I wouldn’t say that it’s unique in that regard.”

Berry discussed so many different trade scenarios regarding their picks that he had to ask on his way downstairs to the news conference how many trades he had made. It turned out to be only one — sending the Texans No. 44 in the second round for No. 68 in the third round and Nos. 108 and 124 in the fourth round.

Cleveland’s first pick of the draft was Mississippi State cornerback Melvin Emerson at No. 68. UAB defensive end Alex Wright was taken at No. 78 and Purdue receiver David Bell at No. 99.

“Each decision in terms of trading up or moving back is largely based on the pool of players that we have on the board at the time,” Berry said of the deal at No. 44. “That decision was made because we did feel like we had a number of players that were graded similarly, and I would say that even in this draft class we did feel like the sweet spot was more mid- to late-second day and in the middle rounds.

“It’s really just how the board fell at some of the different spots that we were targeting. We felt good about the value and adding to volume of picks that we would have this weekend.”

Berry likes to keep all options open but will always lean toward acquiring picks to improve the odds.