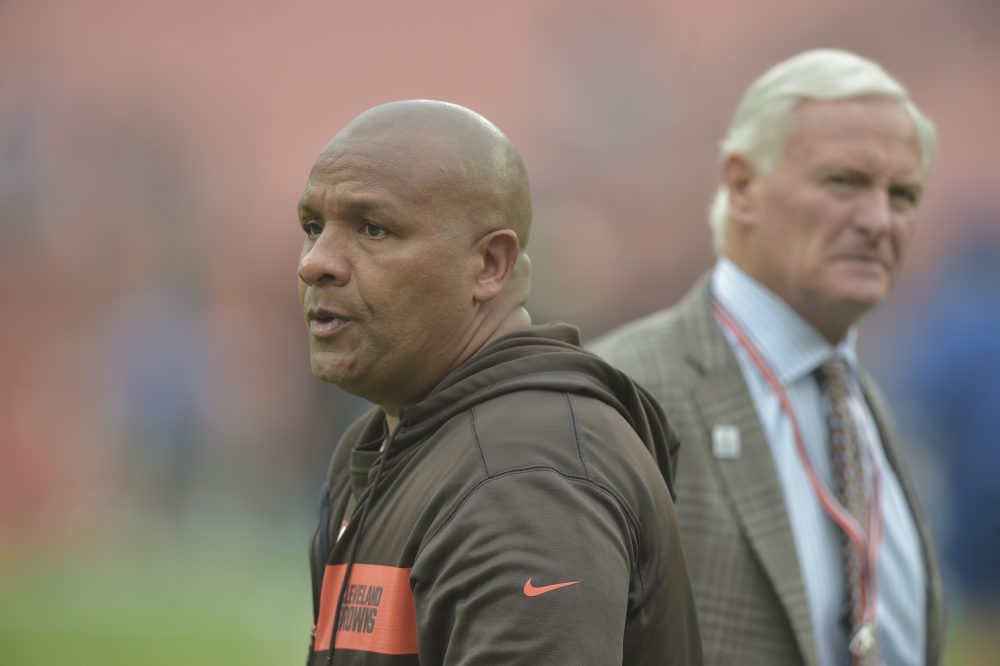 The Browns got a convincing victory over former coach Hue Jackson … 3½ years after firing him.

The NFL cleared the Browns on Monday following an investigation into allegations made by Jackson that the Browns incentivized losing during his tenure from 2016-18.

Former U.S. Attorney and Securities and Exchange Commission Chair Mary Jo White led the independent review along with a team of lawyers from the Debevoise firm and determined “none of the allegations could be substantiated.”


“The investigation found no evidence to suggest that the Browns’ Four-Year Plan or the club’s ownership or football personnel sought to lose or incentivized losses and made no decisions deliberately to weaken the team to secure a more favorable draft position,” the NFL’s statement read. “The comprehensive review included the full cooperation of the Browns and interviews with Jimmy Haslam and current and former members of the organization. While Coach Jackson initially agreed to meet with the investigators, he ultimately did not do so.”

The investigators had access to Jackson’s public statements and filings and testimony from a previous arbitration case with the league.

“The club also produced thousands of pages of documents, including emails, texts, internal memos and presentation decks as well as other material relating to club operations and the filings and testimony in the arbitration proceeding between the club and Coach Jackson,” the league’s statement read.

The NFL announces that it could not substantiate the claims made by former #Browns coach Hue Jackson regarding tanking: pic.twitter.com/PEL3oGRI68

The Browns had repeatedly and categorically denied the allegations.

“We appreciate the independent investigation led by Mary Jo White and the Debevoise team which brings closure to these allegations that Hue Jackson publicly recanted shortly after they were made and that we’ve known all along are categorically false,” the team said in a statement. “As we’ve previously stated, we welcomed this investigation because the integrity of our game is something that should not be taken lightly and an independent review was crucial in bringing a conclusion to this matter.”

The NFL felt the need to investigate after Jackson thrust himself into the discussion following tanking allegations by former Dolphins coach Brian Flores. White is also investigating Flores’ allegations.

In February in response to a tweet suggesting Browns owner Jimmy Haslam didn’t offer him $100,000 per loss — the amount Flores claims the Dolphins wanted to pay him — Jackson wrote that Haslam “was happy while we kept losing” and “Trust me it was a good number.”

Kimberly Diemert, executive director of the Hue Jackson Foundation, made several posts claiming the Browns made the offer to Jackson and that they have records that will help Flores.

Not long after the Browns’ initial strong denial, Jackson backpedaled in interviews on ESPN, saying he wasn’t paid to lose but received $750,000 in a bonus structure that didn’t reward winning.

“Two years ago I tried to do this the right way, through the bylaws and constitution of the National Football League, to ask them to investigate the Cleveland Browns for all the allegations that I’ve made. So why open an investigation now?” Jackson recently told Sports Illustrated.