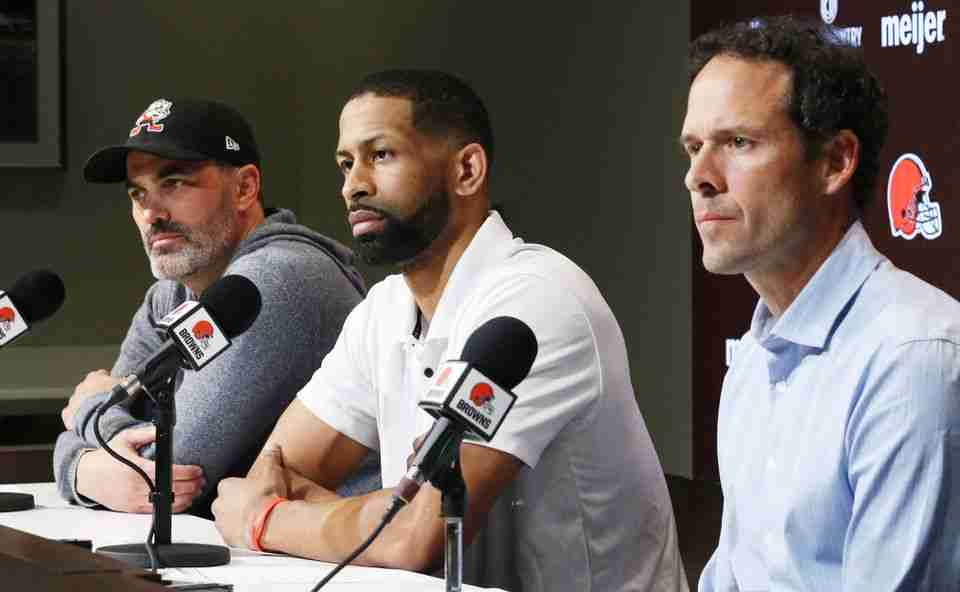 The Browns selected two defensive ends, a defensive tackle and two receivers over the weekend.

Yet the most popular roster questions remain the ones asked a million times before the NFL Draft.


General manager Andrew Berry hasn’t neglected any of these spots this offseason. The issue is whether he addressed them adequately, and if he has other significant moves in store before training camp.

Let’s start with receiver, because it’s such a popular position and one gaining increasing importance in the NFL.

The major move of the offseason was getting Cooper from the Cowboys in a trade. Landing a No. 1 receiver was such a priority, the trade came before the Browns made the blockbuster and controversial deal to acquire quarterback Deshaun Watson.

Having Cooper in the fold allowed Berry to exhale at the position. But cutting the reliable Jarvis Landry to save nearly $15 million in salary cap space and cash left a sizable hole that doesn’t appear filled.

As is the case with the defensive line, Berry threw bodies at the problem rather than adding a proven veteran with a track record of starts and success.

In free agency at receiver, Berry signed Jakeem Grant Sr. and Javon Wims and re-signed Ja’Marcus Bradley. Grant is primarily a returner but adds an explosive element to the offense with 100 catches, an 11.4-yard average and seven touchdowns in his six-year career.

In the draft, Berry took Purdue’s David Bell at No. 99 in the third round and Oklahoma’s Michael Woods II at No. 202 in the sixth round. Bell was an All-American and highly productive (93 catches, 1,286 yards, six touchdowns in 2021) but slid because of a slow 40 time (4.65). Woods will battle for a final roster spot.

It’s not unheard of for a third-rounder to start as a rookie, but Berry mentioned liking Bell in the slot. So if he wins that job, the Browns would still need a starter on the outside.

Donovan Peoples-Jones and Anthony Schwartz, a third-round pick a year ago, would be the choices if the roster doesn’t change. The Browns expect more from each in Year 3 and Year 2, respectively, but either is a drop-off from Landry and a potential concern for a passing attack that needs to be much improved from a year ago.

Landry seems doubtful to return, but Will Fuller, T.Y. Hilton, Emmanuel Sanders and DeSean Jackson remain on the market. Berry will continue to monitor the free agent landscape and search for value, perhaps with his mind made up he’ll add another veteran at the position.

I’m not sure he’s committed to that. If the Browns signed a true No. 2, it would bump the rest of the receivers down a notch. Is Berry comfortable with a depth chart that has Schwartz at No. 5 and Grant at No. 6, especially for a team committed to running the ball?

“We really like the mix,” chief strategy officer Paul DePodesta said Saturday. “The different characteristics that each guy brings, collectively it is a really, really nice room. We feel like the room can sort of do everything.

The handling of defensive end has been similar to receiver, without the quality of resources spent on the guys down the roster. Bringing back end Jadeveon Clowney at a price the team and player find acceptable would return the premium position to one of strength. Clowney revived his career in Cleveland last year with nine sacks, 19 quarterback hits and two forced fumbles, and Garrett continued his recruiting pitch recently on social media.

But Berry has acted as if Clowney’s return isn’t a sure thing, which is smart given Clowney’s mercurial nature. Not wanting to be left short-handed, Berry traded for Chase Winovich, signed Stephen Weatherly and Isaac Rochell and drafted UAB’s Alex Wright at No. 78 in the third round and Oklahoma’s Isaiah Thomas at No. 223 in the seventh.

It’s not a stretch to think Wright or Weatherly could start opposite Garrett, with Winovich and Rochell working into the rotation. Clowney would allow Wright to develop more slowly but cost one of the veterans a roster spot. Another option is signing a pass rush specialist such as Jerry Hughes or Melvin Ingram, who would complement the strongside edge setters in Weatherly and Wright.

A potential need at defensive tackle is less obvious. The Browns like to kick an end inside in pass rushing situations, so only one tackle is on the field a fair amount of time.

What’s clear is there isn’t a proven difference-maker among the group.

The Browns need more from Jordan Elliott, a third-round pick in 2020 who’s yet to make an impact. They believe they got strong value in fourth-round pick Perrion Winfrey, but he’s still a rookie, no matter how great his quotes are and how much energy he brings. They hope to get more out of Taven Bryan than did the Jaguars, who drafted him No. 29 in 2018 and received only 17 starts and 5.5 sacks in 63 games. Reliable journeyman Sheldon Day and second-year Tommy Togiai fill out the depth chart.

Signing veteran free agent Akiem Hicks would change the perception of the interior. I get the sense the Browns don’t feel that’s necessary and may just trust Winfrey to be an early producer.

Berry alleviated the pressure to chase any player or position with the series of offseason moves. He left open the door for the right fits at the right price.

And for the same questions to continue to be asked for another couple of months.