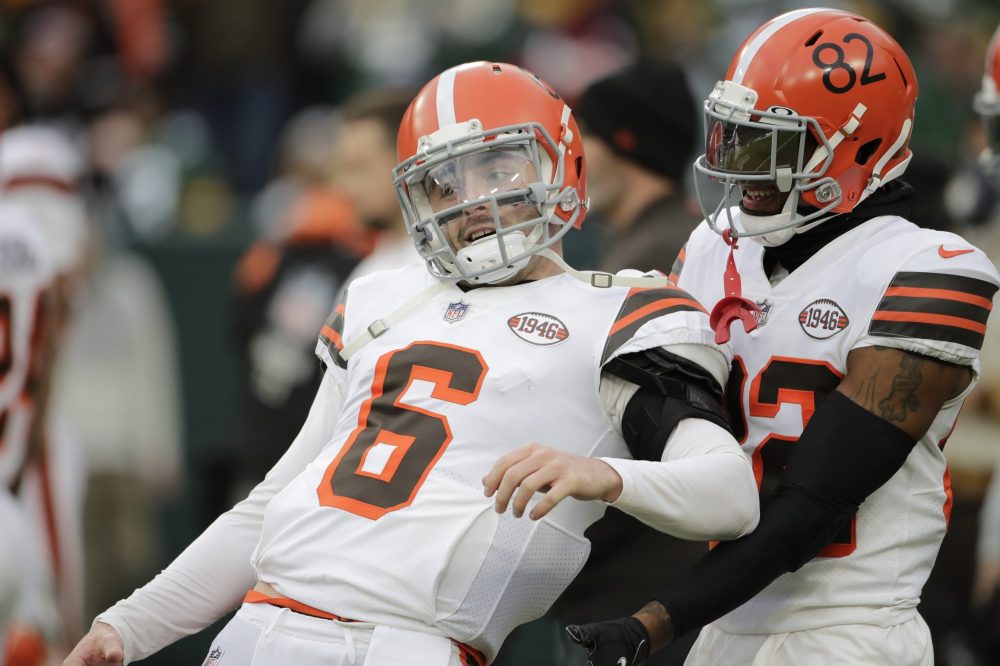 Q: Is Andrew Berry stubborn enough to hold onto Baker Mayfield all season long? If so, is Kevin Stefanski skilled enough to navigate the drama in a way that doesn’t destroy the team?

A: Stubborn is an interesting choice of adjective. Berry probably considers his lack of urgency to part with Mayfield as patient, smart and frugal.

But to answer your first question: No.


Commentary: Baker Mayfield still on roster after draft, and that’s starting to be a problem for Browns

To this point Berry has stuck to his plan not to pay a large chunk of Mayfield’s guaranteed $18.86 million salary for 2022. He must be waiting for the market to grow, while figuring if he agrees to bite the bullet and foot the bill for millions down the road, he could complete a deal. I believe Berry is flexible enough to realize when he’ll need to change his thinking.

I can’t get my head around a scenario in which Mayfield starts the season with the Browns, let alone finishes it. I just don’t think it’s worth the trouble. Until I see Mayfield at minicamp in June, and again at training camp in July, I won’t believe it’s possible.

As for Stefanski, having Mayfield in the building and on the field for any length of time would put the coach in an awkward spot. He and Mayfield didn’t always see eye to eye last season, including Mayfield twice publicly criticizing Stefanski’s play calling. One of Stefanski’s strengths is his steadiness, which would serve him well in your scenario, but there’d be a lot to juggle, and I think most coaches would struggle to handle it. “Destroy the team” is probably a bit overdramatic, but I’m not sure Stefanski could keep the drama from undermining what he’s trying to accomplish.

Q: If Baker Mayfield is still on the team when training camp starts, will the alleged “distraction” be more of a factor for fans, his teammates or the media who will endlessly comment on his presence?

A: The media would continue to comment on his presence because it’s news. Mayfield is a former No. 1 overall pick who wants to be traded — and the team wants to trade him. How he and the team handled the situation, including any practice repetitions he’d receive, would be interesting to watch. Not to mention what Mayfield had to say about being stuck here.

With that off my chest, I believe it would be a distraction – no “alleged” or quotes necessary — for everyone involved. On that list are Deshaun Watson, the divided fanbase, teammates and coaches. Unhappy quarterbacks with huge personalities who are on the trading block are unicorns in the NFL. If I had to pick a “most distracted,” I’d probably go with the fans. They need closure.

Q: There’s a report that the Browns have shown interest in Jerry Hughes, and it seems he’d be cheaper than Jadeveon Clowney. Would Hughes be a better fit for the Browns at defensive end, particularly if the price allows for another significant veteran signing?

A: I’m sure Hughes would be cheaper, and if all things were equal, Clowney would be the better choice. He’s a stronger run defender and an every-down player.

But the money saved with Hughes must be considered. For example, I’d say a combination of Hughes and defensive tackle Akiem Hicks would be more valuable than Clowney by himself if the cost were the same. I’m not sure that’s a realistic scenario, but it’s one I’d pursue if I were Andrew Berry. Even without Hicks, Hughes would be a nice Plan B if Clowney doesn’t return. Hughes would likely be primarily a pass rush specialist, which would work in a rotation with rookie third-round pick Alex Wright and veteran Stephen Weatherly.

(UPDATE: Hughes reportedly reached a deal with the Texans on Tuesday.)

A: The long list is why I’m not convinced the Browns will sign an established veteran before training camp. If the Browns added a legitimate No. 2 wideout, Schwartz would likely fall to fifth on the depth chart a year after being a third-round pick, and I’m not sure Berry would want that.

So let’s assume no one else of significance is signed. I’ve got Cooper, Peoples-Jones, Bell, Schwartz, Grant and Bradley making the team. Sixth-round rookie Michael Woods II doesn’t make the cut.

Q: With Nick Chubb signed long-term, the potential (& affordability) of D’Ernest Johnson & the drafting of Jerome Ford, it feels like the Browns are laying the groundwork for a Kareem Hunt trade. I’m sure they’d like to recoup some of the draft capital spent on Deshaun Watson. What say you?

A: I’m torn between predicting a trade of Hunt or Johnson, because I agree the running back room is overcrowded.

Both are entering the final year of their contracts, so I don’t think the Browns would get much in return for either. Johnson is certainly cheaper, but the Haslams have been throwing around their cash lately and the salary cap isn’t a concern in 2022, so I lean toward Hunt being kept. He’s a better player and a better receiver, which is important given the potential questions at wideout. But I wouldn’t rule out Hunt being dealt for a midround pick.

You’re correct about the draft capital. We saw again during the draft that it’s an organizational priority.

Q: What undrafted free agent or draft pick has piqued your interest?

A: I’m intrigued by a few guys, but I’ll go with receiver David Bell, the No. 99 pick. I like Big Ten guys, I love the production he had at Purdue — 232 catches, 2,935 yards, 21 touchdowns in three years — and he’ll get a chance to contribute right away. Adding to the interest is the obvious negative in the scouting report — he doesn’t run fast. He ran a 4.65 40 at the scouting combine, then clocked 4.71 at his pro day. The Browns obviously think he can overcome that with route-running, size and great hands, but that’s the reason he was available in the third round and it will be something to watch as he transitions to the NFL.

Mailbag: Who’s on the wish list for Nos. 44 and 78 in the NFL Draft?
Mailbag: What three-game stretch of schedule will define season?